Out and About With the Naturalest Naturalist – Part 3

On our last day, Jeremy Gatten and I decided to skip the exploratory hike into what was probably going to be a bone-dry Holden Canyon and headed for Sycamore Canyon, certain to have water and some cool damselflies. We spent much of the day at the moist seep below, trying to get photos of what turned out to be at least five species of damselflies, possibly even more. 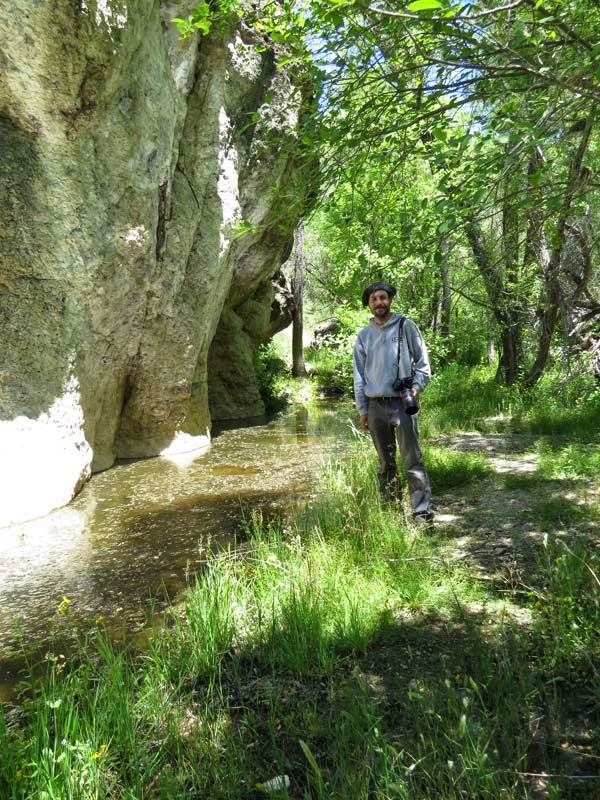 In the morning from within my tent at California Gulch I enjoyed a tremendous dawn chorus of more than 20 species, with White-winged Dove and Cassin’s Kingbirds leading the orchestra more than an hour before sunrise. Even some migrants such as Green-tailed Towhee and Hermit Thrush chimed in with warm-up versions of their songs, grossly out of place in this desert canyon.

The only bird I paused to photograph at our campsite was this Hooded Oriole, which demonstrates the distinctive yellowish color overall and the yellow of the forehead coming all the way down to the bill, unlike the nominate subspecies from Texas and eastern Mexico, which is much more rich orange and shows a narrow strip of black from the face just over the bill. 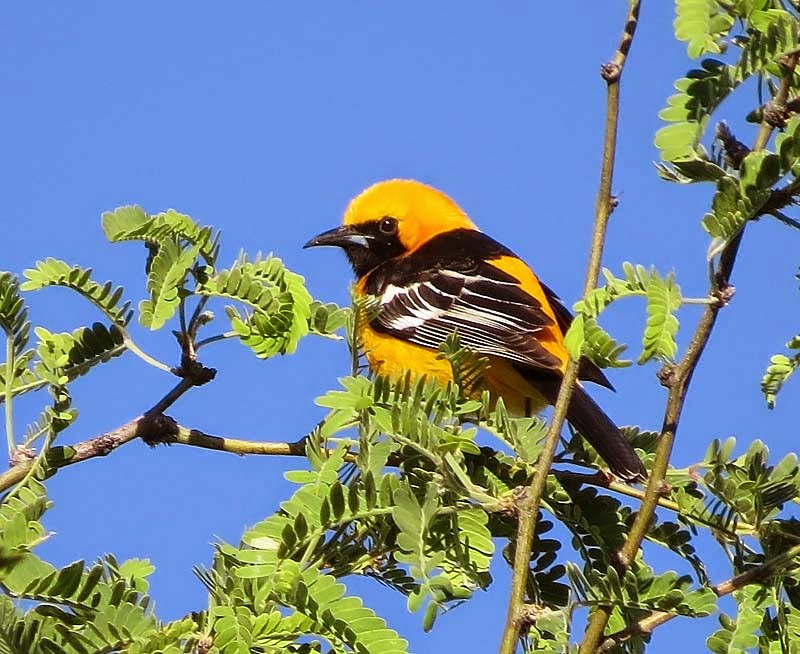 We then headed for Sycamore Canyon, about a half-hour drive away. Here we found yet another band-wing that appears to be Red-shanked Grasshopper, Xanthippus corallipes pantherinus, with a rather variable forewing pattern from population to population. 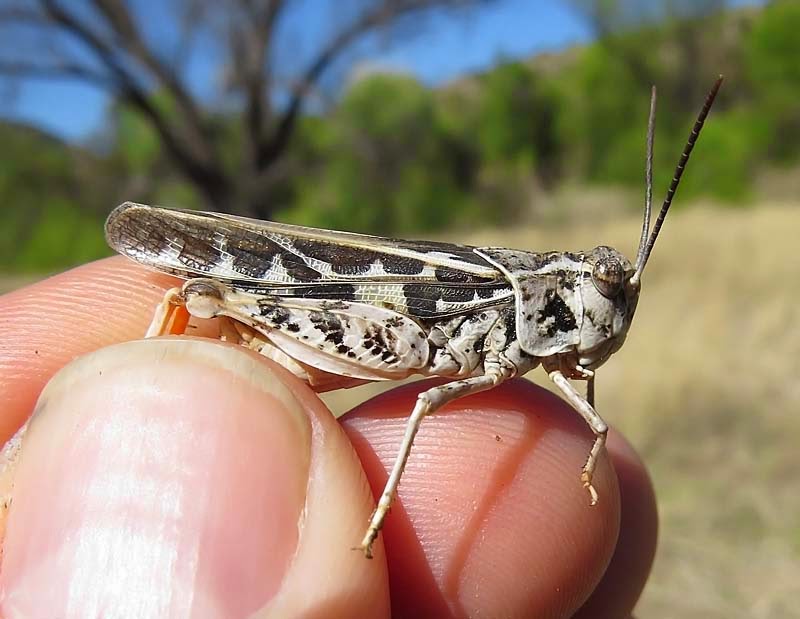 A Dusky-capped Flycatcher greeted us at the trailhead before we headed into the canyon. 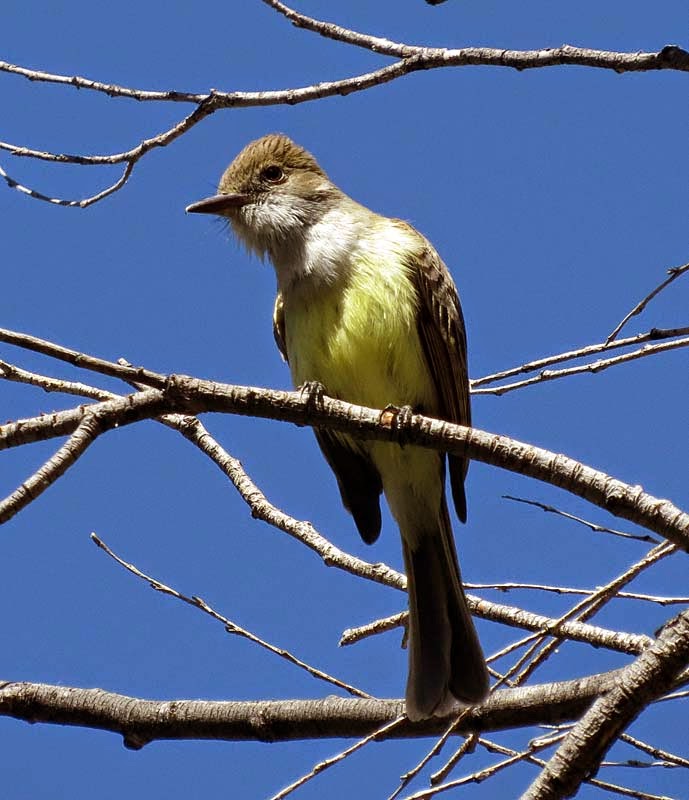 More Montezuma Quail were calling from the hillside above a side wash, and Canyon Spotted Whiptails, Aspidoscelus burti, darted here and there, this one pausing just long enough to me to get a photo at 50x. They are extremely shy and fast. 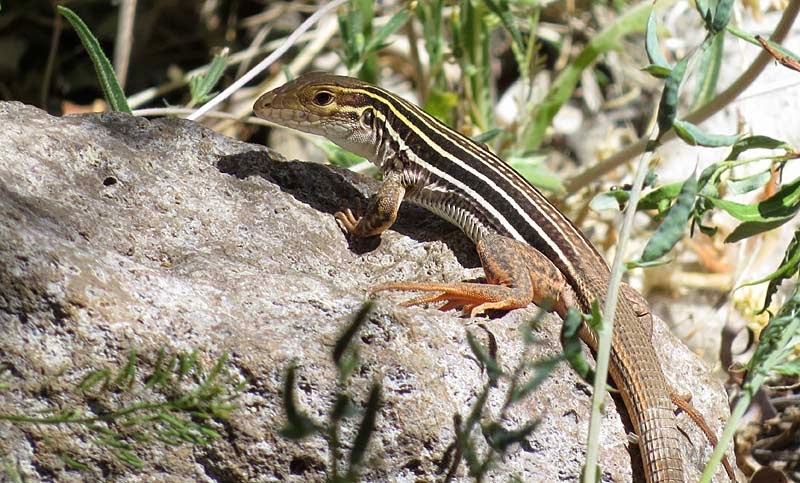 I first heard these tiny bee flies, Lepidanthrax angulus, as several were sipping nectar at various clumps of Phacelia distans flowers. It was a very high, nasal whine that intensified when they were either courting or jousting over control of a flower. 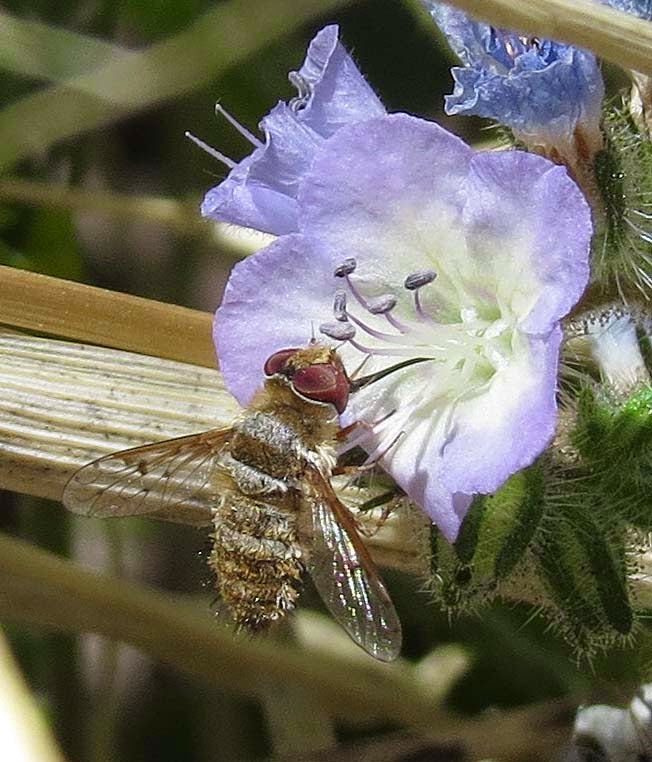 This common grasshopper is Oak-leaf Grasshopper, Tomonotus ferruginosus, recently pointed out to me by Margarethe on our outing to Molino Basin. 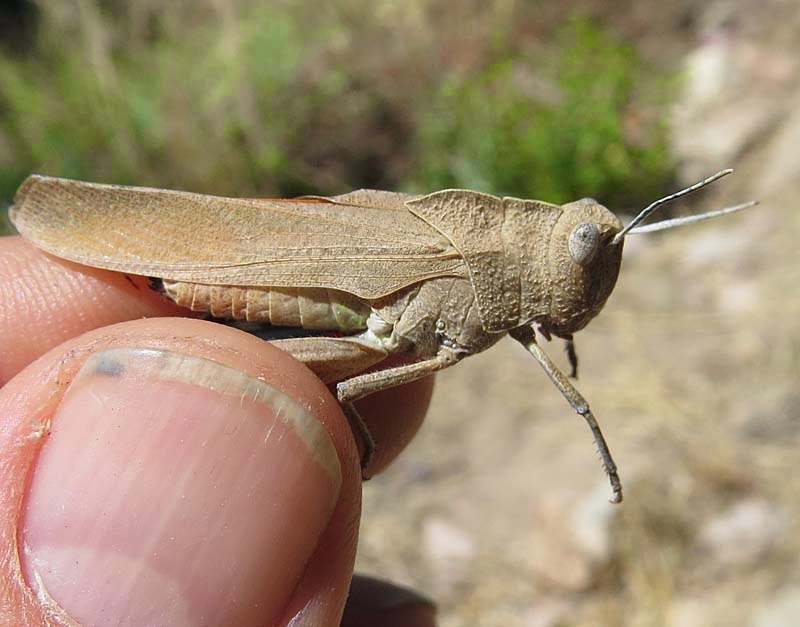 Finally some odonates. Dragonflies were scarce, but there were plenty of damselflies. The ones that we have names for: Amethyst Dancer, Argia pallens 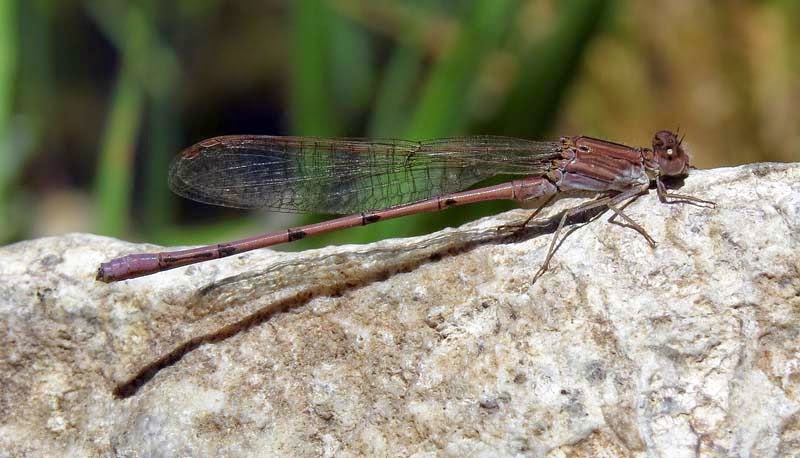 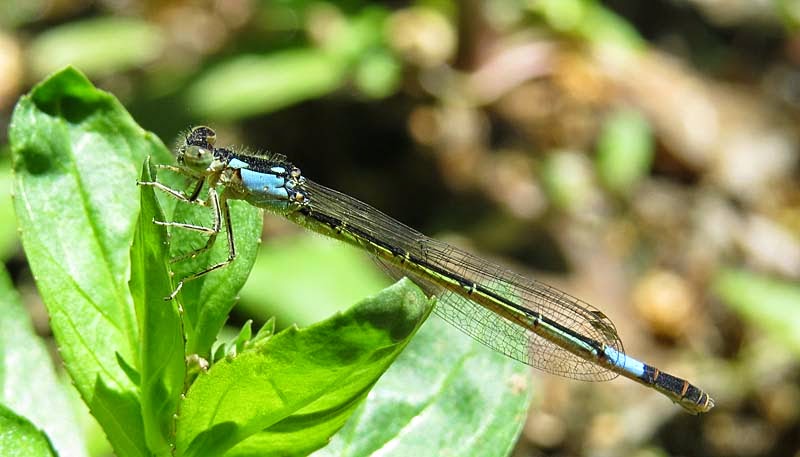 For some reason, I missed getting a photo of Black-and-white Damsel, one of the most interesting species here.

This female katydid (it has a very long ovipositor, which you can't really see in this photo, except for a bit of an outline through the tip of the wings) is a Broad-tipped Conehead, Neoconocephalus triops. 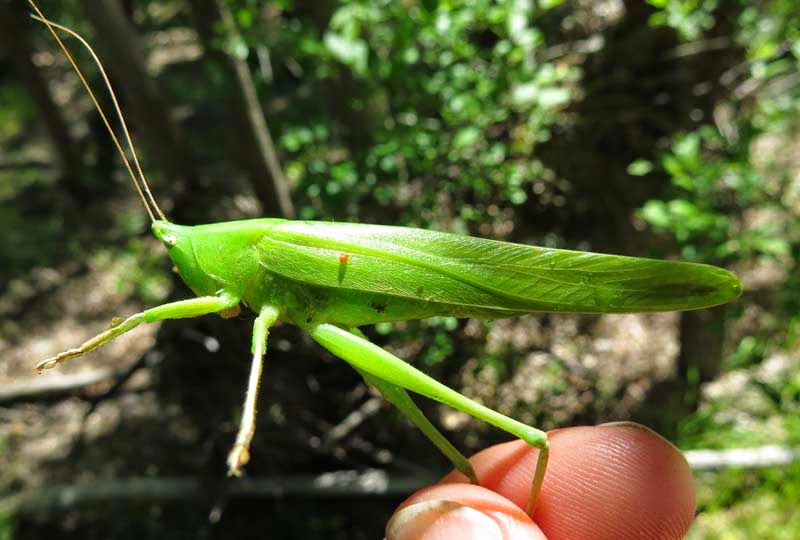 Thanks to the water, there were several of these gorgeous Santa Catalina Indian Paintbrush, Castilleja tenuiflora. 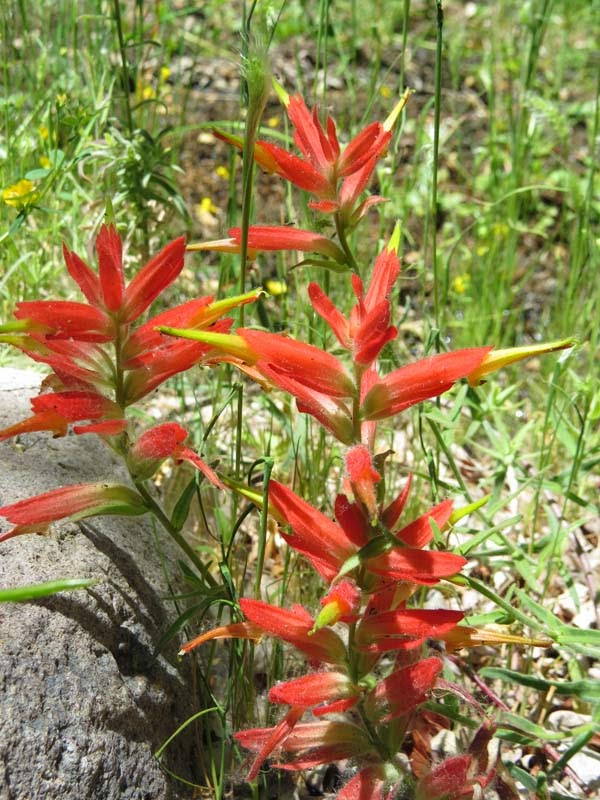 Yet another Sheep Skipper, Atrytonopsis edwardsi, this one on a thistle that I did not identify (they can be tricky, and I don’t trust the old keys to be current). 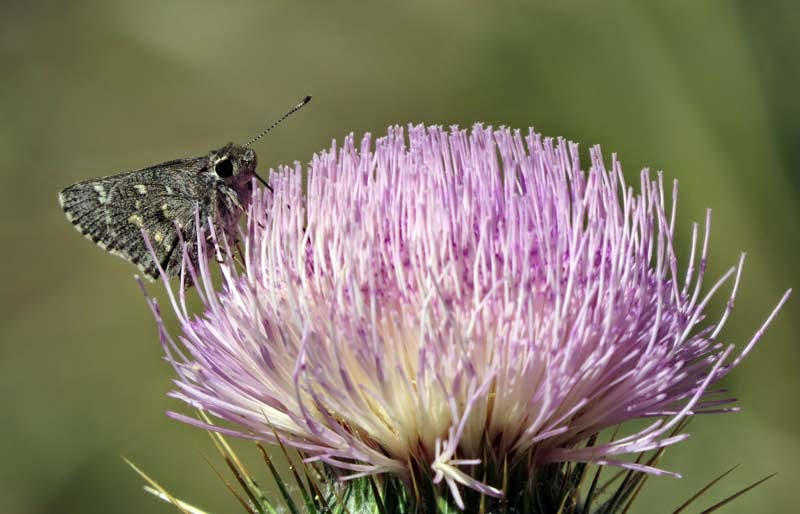 Our last stop before heading out of the Atascosas was a side draw I call Thumb Rock Wash, where this Siva Juniper Hairstreak, Callophrys gryneus siva, was getting moisture from the mud. 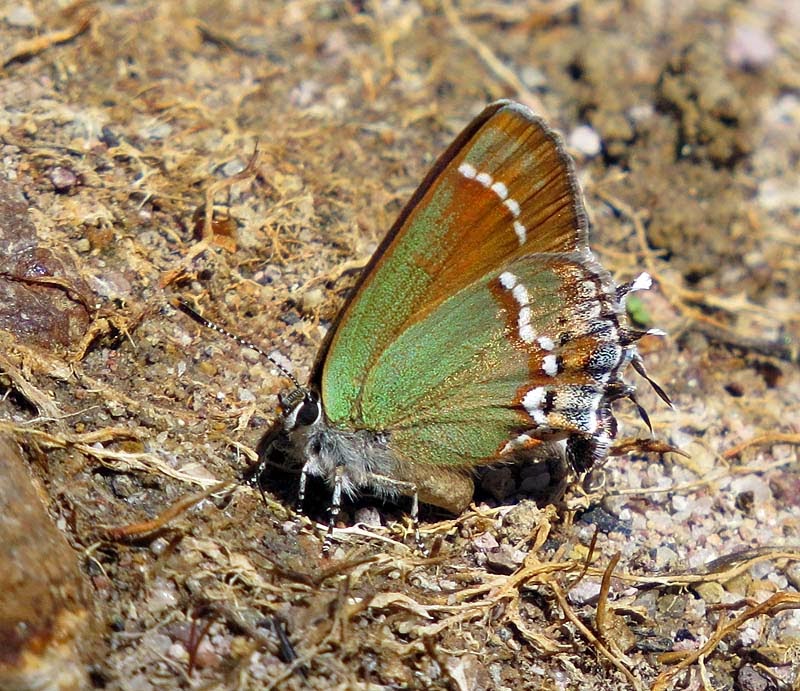 While scrambling up the hillsides near here, I found a cell phone just under the edge of a border. Long story short: I took it home, charged up the battery and turned it on to find that it apparently belonged to an undocumented immigrant. There were photos, mostly of a group of camo-dressed immigrants on their hike, but also one of a grocery store and two of some toddlers. And there were quite a few text messages dating from last June, some in a native language that my friend Carlos Ross determined is Ma, a Maya language spoken in Guatemala. The ones in Spanish mostly said things like “miss you,” “love you,” etc. I sent the phone to a human rights organization in Tucson that works with missing immigrant cases. I haven’t heard if they were able to find out the continuation of this guy’s story.
Posted by Birdernaturalist at 8:24 AM