A Nearly Perfect Day in Jamaica, Plus Some Beetles and Moths

Our second full day of birding in Jamaica was nearly perfect, a ideal day of sublime birding, one amazing bird sighting after another, mixed with odd plants, vertebrates, and invertebrates, many also endemic.

I can barely imagine a more enjoyable day of birding for my clients. I had gotten up extra early, prepared a scrambled egg, toast, and cereal breakfast for them so we could be out in the good habitat at dawn (and our housekeepers had prepared fruit plates the evening before), and by noon we had seen 22 of the island’s 27 endemics, most of them extremely well. Just the evening before, after some effort, we had amazing views of a Jamaican Owl and earlier that day we had perfect views of this Jamaican Lizard-Cuckoo with no help from my iPod. 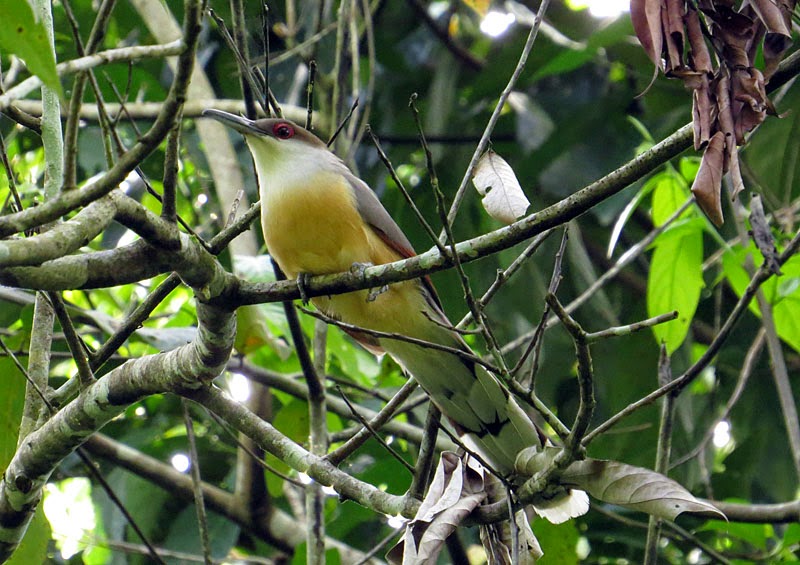 That meant by lunchtime this day, which was a delightful preparation by our housekeepers (and I had to order it from home several days in advance), we had seen (SEEN!) 24 of Jamaica’s 27 endemic birds.

We had views of a perched Ring-tailed Pigeon. We hadn’t yet had our best views of Crested Quail-Dove (see my previous blog), but everyone had countable views. A Chestnut-bellied Cuckoo was very obliging, and if the Jamaican Mangos weren’t satisfactory, one was at the feeders at our lodge, and the same could be said of the Black-billed Streamertails. We saw several Jamaican Todies, some at a ridiculously close range, like this one. 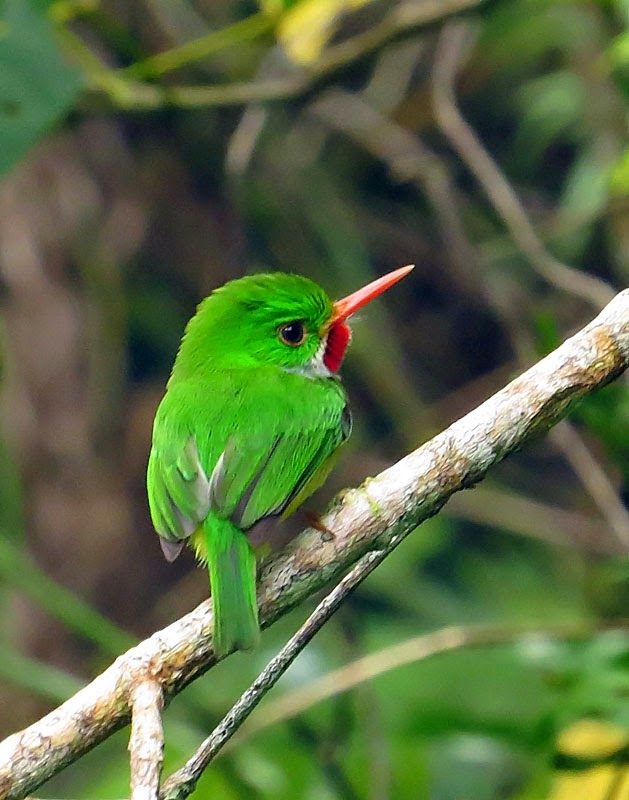 We had seen Jamaican Woodpecker the day before, but today we had spectacular views. Black-billed and Yellow-billed Parrots perched for scope views, Jamaican Elaenia responded to playback like nothing else existed, and this Sad Flycatcher was almost close enough to touch. 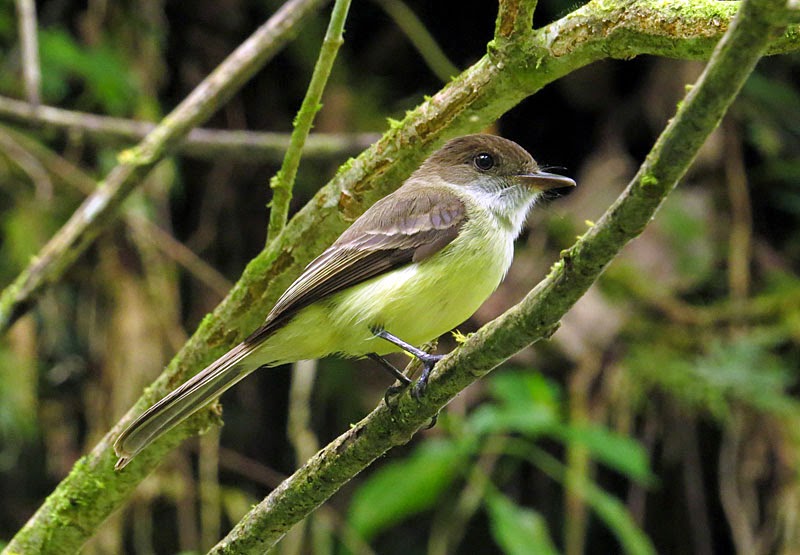 We got our best views of Rufous-tailed Flycatcher, saw Jamaican Vireo well enough to count, and enjoyed the oddness of a Blue Mountain Vireo. Jamaican Crow called here and there and flew by well enough to see that it was indeed a crow, and we even saw the white chin on White-chinned Thrushes. The strange Orangequit was everywhere, the monotypic genus of Yellow-shouldered Grassquit couldn’t have performed better, Jamaican Spindalis was hard to avoid, Jamaican Blackbird was easier than usual, and Jamaican Euphonia showed up here and there with no effort.

So what kept this day from the absolute pinnacle of perfection? After all, how can you top seeing 24 amazing endemics in 24 hours, all lifers for everyone except for me and my co-leader Ann Sutton? And we even had heard a 25th endemic superbly, the White-chinned Thrush, which has a marvelously musical voice superseding its own appearance by any measure. There were only two endemics we hadn’t seen or heard, and to be sure I was keeping track, and we still had FIVE more days on the island. I had worked hard and enjoyed showing these all to my clients; after all, I had developed a personal relationship with all of these species over the past 16 years. So what kept this from being the most perfect birding day ever?

It came at about 3:45 p.m. when one participant asked, “So, what are our chances that we’ll see Jamaican Pewee?” I found that question more than just annoying, though I simply and pointedly responded by saying just that. A happy and thoughtful person should have been still swooning over just that one Jamaican Tody, or even more so over the Jamaican Lizard-Cuckoo we saw as it pried apart clusters of dead leaves right over the road. And I’m certain most of the participants were doing just that. I was fully aware we hadn’t seen Jamaican Becard, White-eyed Thrush, or Jamaican Pewee, for that is my job, and I always want my clients to see everything. I was also aware that most people needed better view of Jamaican Vireo and Arrowhead Warbler, and we hadn’t yet seen a Jamaican Crow perched, for example. But who in their right mind would have been thinking about those misses after all we had seen? Isn’t it fair to assume that our chances for seeing any more endemics were as good as they’ll ever be, given that that’s my job, and I was currently doing it nearly 12 hours a day and we had five days left? Besides, is there really an answer to that question that makes any sense? Of course with birds, it’s never 100%, so was she honestly hoping for answer like 91.29% or 88.4%? Since there obviously isn’t a correct answer to that question, I instantly regarded it as a rhetorical and offensive criticism of my effort and abilities. I saw it as an indication that everything I had done this day, starting with getting up extra early to make breakfast had been a complete failure and that nothing we had seen that day counted towards anything. But of course only after I thought about it for some time did I conclude that it wasn’t meant to be that, and didn’t reflect on me at all – it reflected only on that one person’s mindless goal of getting all of the endemics and a persistent internal state of dissatisfaction and unhappiness. I can’t change that in anyone, but then why not a more thoughtful and less critical way of asking that question, such as “is the Ecclesdown Road the only place we had a chance for Jamaican Pewee, or might we see it later in the tour as well?”

It’s impossible for me to not be preachy at this point, and maybe I’ll encourage people to be happy if I vent just a little. There are anywhere from 10,000 to 15,000 species of birds on this planet. No one will ever see them all. If your goal when traveling somewhere is just to see all of the birds, you will probably fail, and why would you want that? I’m not against listing, and in fact I encourage it – it takes you to interesting places, and it’s a great portal for learning about bird biogeography, behavior, genetics, and identification – as long as the list isn’t your only goal. My career is a joy only as I share others’ delight in discovering the amazing birds we see on my tours. But if their one and only goal is to see them all, to miss nothing, then they are setting themselves up – and me as well – for disappointment, and at the same time they’re not really able to enjoy the birds they’re seeing each step along the way, for worrying about missing the next one is always there. I try to not market my tours as those on which you see every endemic, every specialty. Except for that first tour in 1999, when we only heard Crested Quail-Dove, I have never missed an endemic species in Jamaica (though don’t tell anyone that, nor the fact that I showed Joe Thompson all 27 endemics in just over 12 hours one day a few years ago). If the Greater Antillean Elaenia gets split, we’ll certainly miss that endemic from time to time, though I’ve now seen it three years in a row. And sometimes we get just one Bahama Mockingbird or just brief views of Rufous-throated Solitaire, both of which could be split and become island endemics. There’s no sign that Jamaican Blackbird is getting any more common (and it’s probably the scarcest endemic and the pickiest when it comes to needing very good habitat), and on some tours I’ve come close to missing Jamaican Lizard-Cuckoo. So it will happen.

But I don’t want to stress getting all the endemics, because I don’t want people to have that nagging worry instead of having fun. Enjoy what you’re seeing in the moment and let me worry about missing birds. No matter what, we’ll see some spectacular birds, including some common birds performing spectacular behaviors, and we see some pretty amazing moths, butterflies, fish, reptiles, amphibians, miscellaneous invertebrates, and maybe even some mammals.

So I fumed (mostly internally) for the next day or so, but then we saw the pewee, had amazing views of a Rufous-throated Solitaire feeding on berries below eye level, and had the mind-blowing looks at Crested Quail-Dove; and that one unhappy moment dwindled in importance. We eventually had superb views of White-eyed Thrush, had plenty of Jamaican Becards building nests, even saw the crows perched and even better views of Black-billed Parrots. Though I added no new bird species to my island list, I still enjoyed showing them to people for whom almost everything was new, and who will probably never get a chance to see them again. Besides, you can never see too many Jamaican Todies, and we saw some every day of the tour. I also still delighted in learning more about Jamaica’s natural history, including plants and bugs. I actually knew the name of this Eburia tetrastalacta long horned beetle after lunch on our first day (though most participants wouldn’t even get out of their chair to come see it, sigh), since I had seen it every year so far that I have been paying attention to beetles in Jamaica. 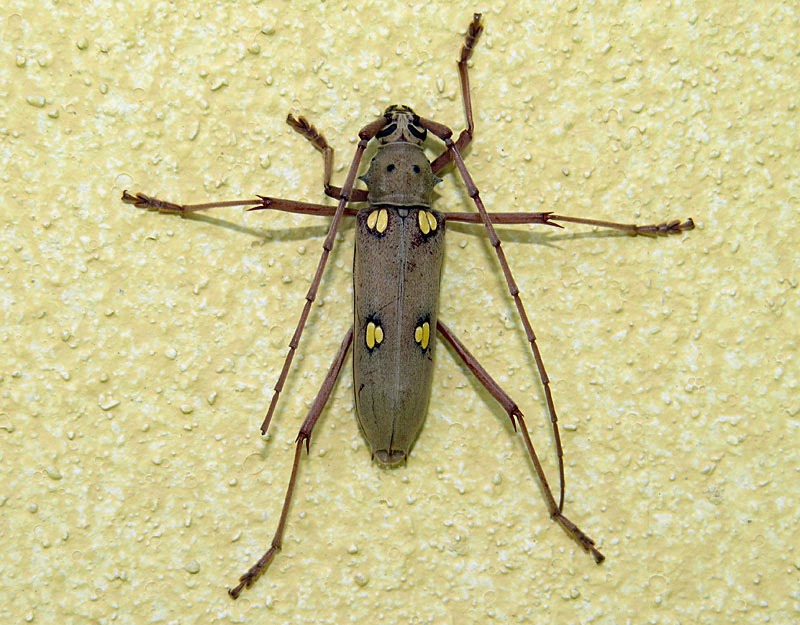 But then at lunch two days later everyone got to see this longhorn, a new one for me, Elaphidion spinicorne. Though not an island endemic, it’s apparently a Greater Antillean specialty. Many thanks to the folks who created the New World Cerambycidae Catalog. 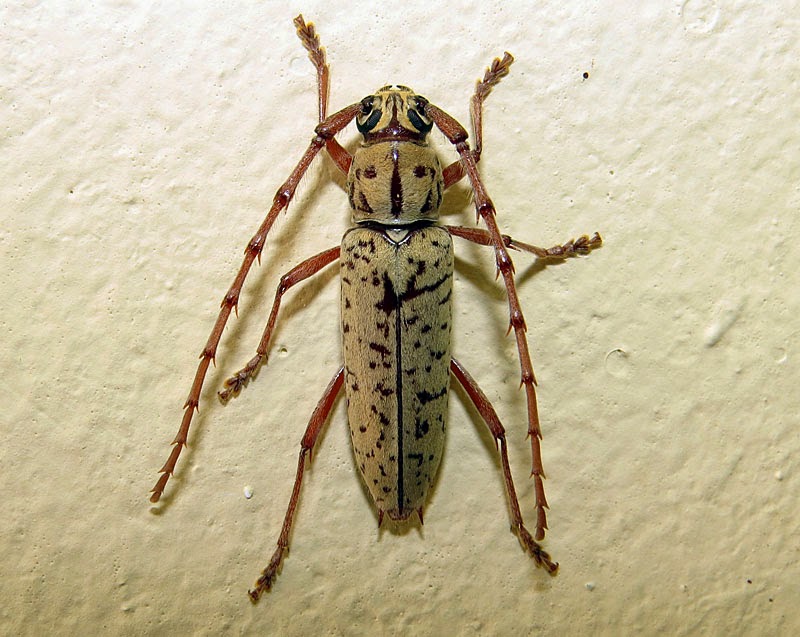 There were several interesting moths at Starlight Chalet this time, and this spectacular endemic Jamaican Wasp Moth, Horama grotei, was my favorite find. 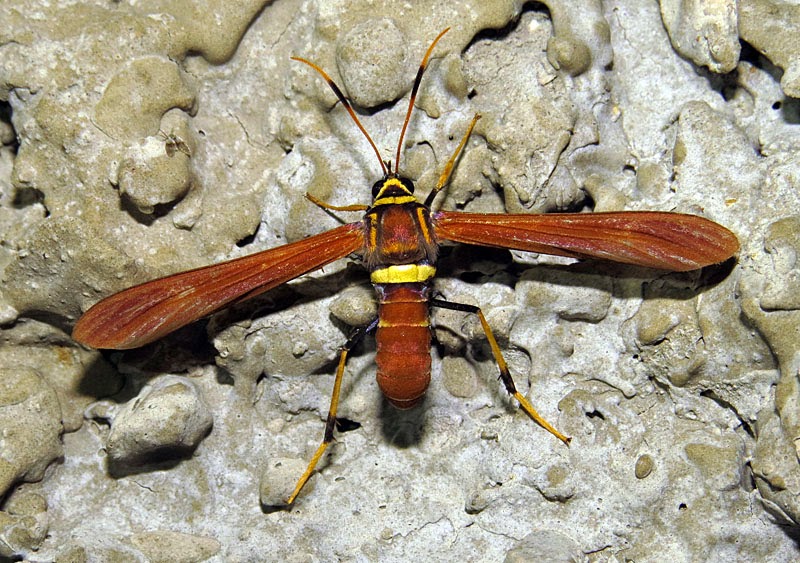 This erebid Eulepidotis modestula isn’t endemic, but it’s one of the prettiest of this genus I’ve seen. It looks extremely similar to photos of Eulepidotis micca, known as a vagrant in Texas, and I suspect there might be some confusion there. 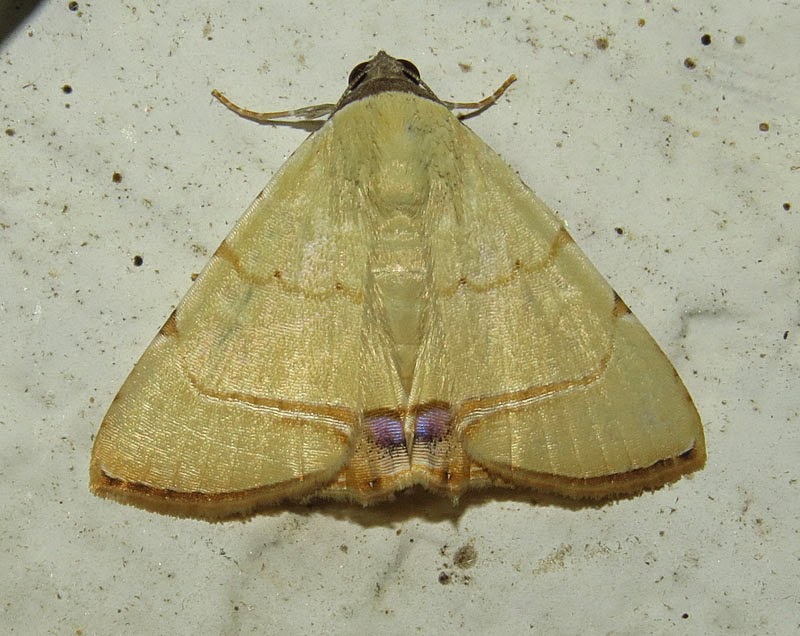 This is Epimecis scolopaiae, probably one of the largest members of this geometrid genus (with something like 44 species) and a Greater Antillean endemic as well. As far as I can tell, there are no live photos of this species online. 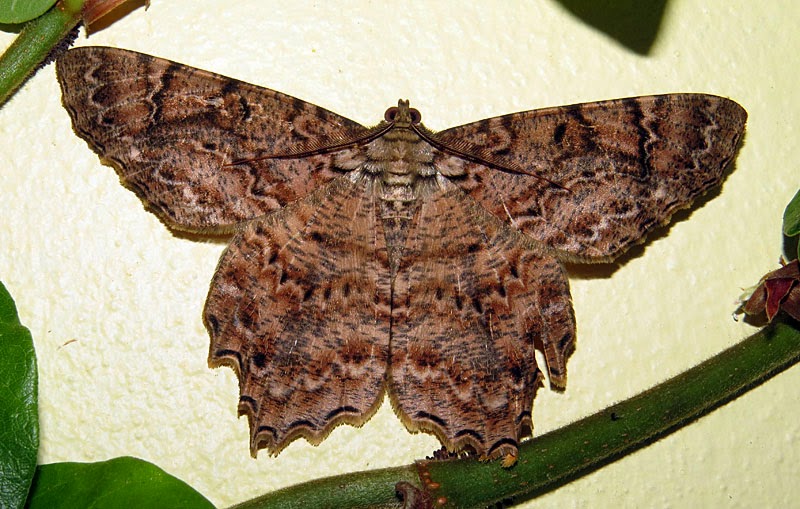 Also new for the internet as a live bug is this noctuid Bryolymnia floccifera, apparently a Jamaican endemic. "Bryo" refers to moss, but I don't know what "lymnia" means, unless it's related to "limn," perhaps in the sense of  "highlight." And "floccifera" means bearing woolly tufts. 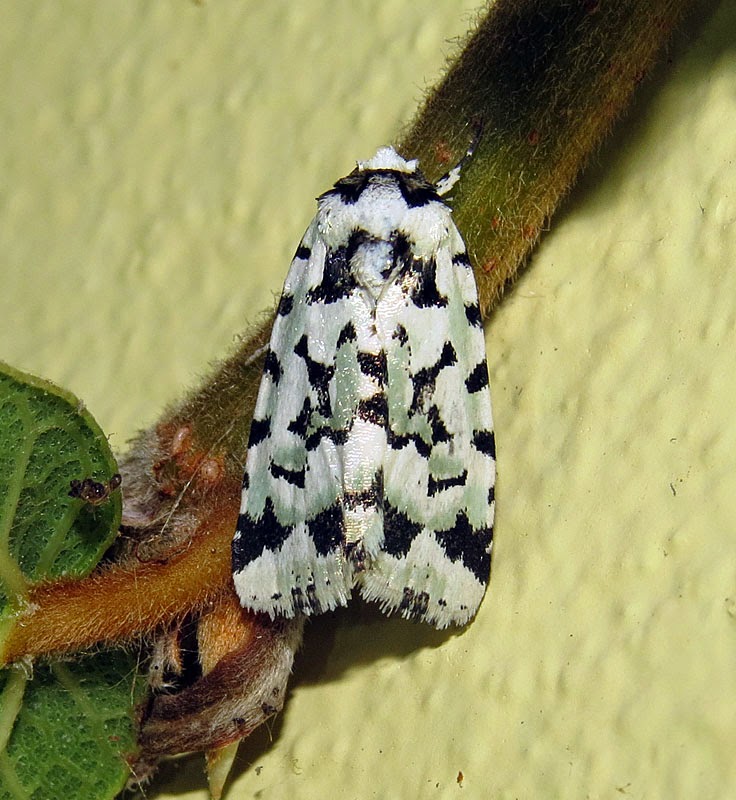 I had photographed this little geometer once before, and with more specimen photos of similar species available online, I’ve decided this is probably Semaeopus callichroa, found in Jamaica and Cuba, and represented online only by a 90-year-old illustration. 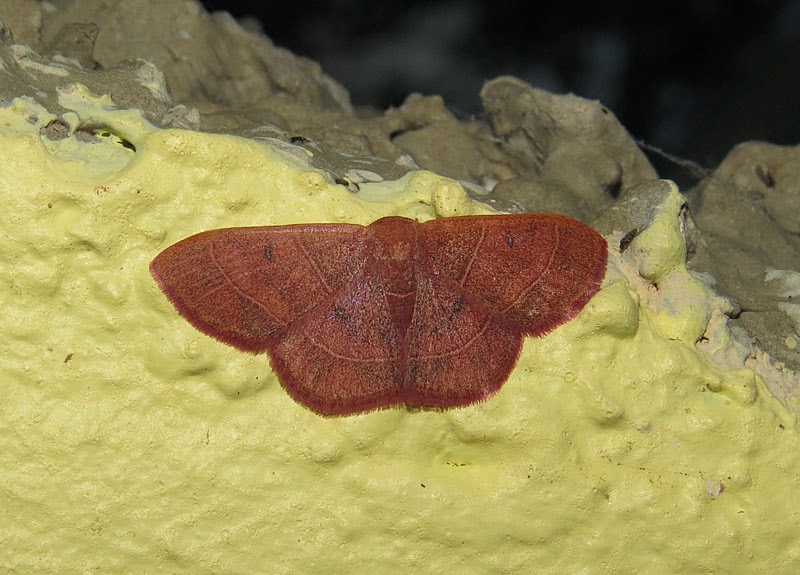 One last photo is of this Aegisthus Swallowtail Moth that one of my participants spotted on a window at Marshall’s Pen. I’ve seen it once or twice in the past, but I’m still a bit uncertain what to call it. Almost all lists now use Sematura as the valid genus, but there is an undecided three-year-old case before the International Commission on Zoological Nomenclature that admits that Mania has priority but should be dropped for the simple reason that Sematura has been used for so long. Further confusing the issue is name Nothus, which is even older than those two names and is still used by several authoritative-looking websites (such as the London Natural History Musem); but since it was used for a beetle first it is clearly invalid for a moth. But for now it’s looking like Mania aegisthus is the best name. 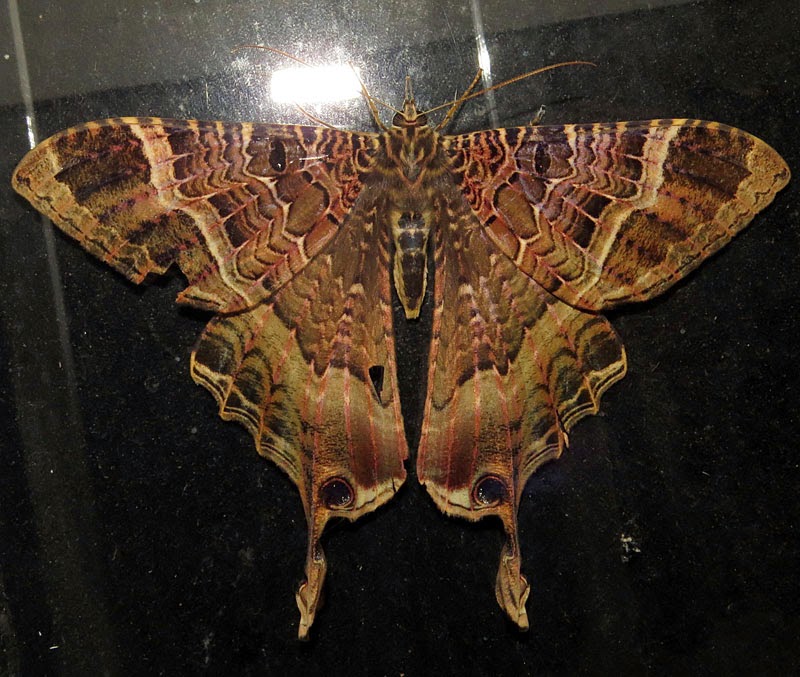 Posted by Birdernaturalist at 2:52 PM