I came to Nepal for two reasons: the first is to spend time with my friends Kate and Mich, who no longer live in Tucson and who also have two adorable children. And the second is that it’s about as far away from anywhere I’ve ever been on this planet and certainly has a bunch of really different birds, butterflies, plants and other critters I’ve never seen. I’ve been planning on this trip for about two years.

A lot of foreigners travel to Nepal; it’s one of the most popular tourist destinations in Asia. But why? Since none of them know Kate and Mich, and virtually none of them are birders, what in the world are they doing here? I certainly wouldn’t have given Nepal a second thought without friends and birds. It turns out all those travelers come here to trek.

Apparently, travelers have been doing this for decades, but I wasn’t quite grasping the concept. You just go walking in the mountains because….the roads are too bumpy? Because you heard someone else did it, and it sounded exotic? Much of Nepal is extremely mountainous with very few roads, and local people have been traveling by foot to remote villages for centuries. I’m guessing a few decades ago the vanguard of world travelers found that they could walk the same trails and see some landscapes and cultures that few people had ever seen. Word got out, and now it’s just something you do.

My dear friend Andrew is here with me for a couple weeks. Also friends with Kate and Mich from Tucson, he has a very good excuse to be here for a visit, but he’s only mildly interested in birds. He’d been to Nepal three times, always stuck in the Kathmandu area, and this time he finally wanted to do what everyone has been clamoring about – a trek. “Whatever,” I said. If it goes through anything resembling natural habitat, it will have some amazing new birds for me. I’d rather not walk miles and miles through rice paddies and tea farms, but even there I’d probably see some new birds and different landscapes. Let’s see what this trekking thing is all about, I agreed. 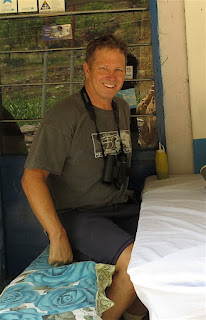 Instead of doing one of the two- to three-week expeditions that circumnavigate one of the larger Himalayan massifs, we inquired at our Pokhara hotel about a simple four-day, three-night trek, hiring a guide to show us the way and a porter to carry our bags. Call it the Queens of the Andes trek. At what would amount to about $30/day for the entire four days, including all services, food, and accommodation, I thought that was a pretty good deal.

Our first day we departed around 8:30 by taxi for the 75-minute drive to the bustling village of Nayapul, along with our guide Resham, and his cousin Ananta, hired to carry our small bags. The first few kilometers were actually along a rather decent dirt road that any vehicle with some clearance could cover. 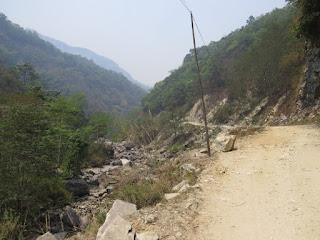 Our guide Resham was a cheerful guy. 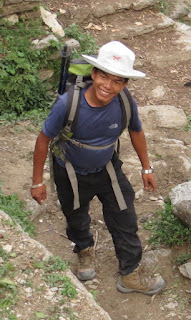 We stored the bulk of our luggage in our Pokhara hotel and tried to pare down what we brought. We felt kind of bad even having much less than the 15 kilogram limit, as 20-year-old Ananta is a small guy. 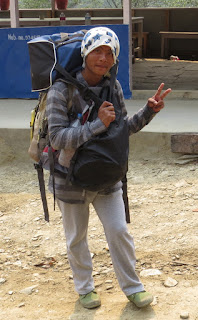 My first lifer, in the rather scrubby lower slopes was this Striated Prinia. 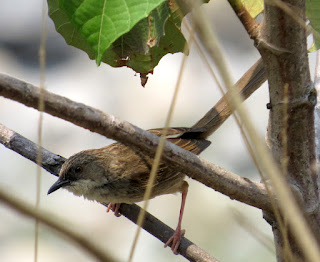 Trekking tourism is huge business here, with all levels of government involved. 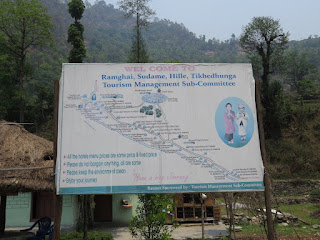 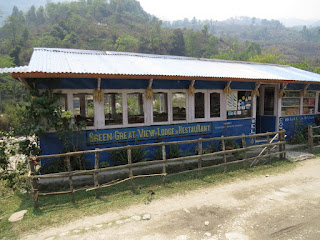 We eventually passed through some nice patches of woods while still along the dirt road. 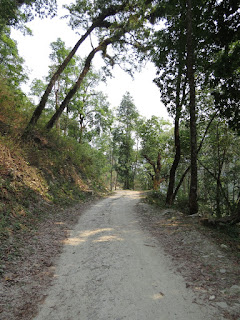 The hyper Crimson Sunbird is not a rare bird in these elevations. 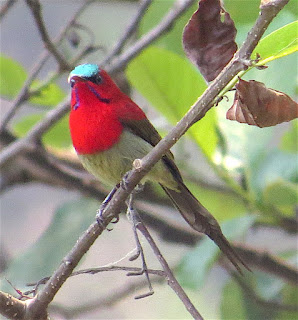 We took a lunch break at a restaurant, where Andrew pointed out this pair of mating swallowtails. I didn’t have my butterfly book with me on the trek, so later I identified it as Papilio protenor, the Spangle. 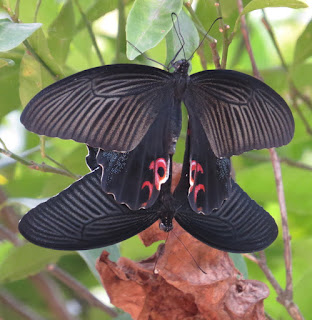 We’re here near the end of the dry season, so there are few things in bloom, other than spring-blooming trees (we’re not quite tropical here, at the same latitude as Corpus Christi, Texas or Tampa, Florida). So it was a surprise to see a few of these orchids Dendrobium densiflorum in bloom while all other epiphytes were all shriveled up. 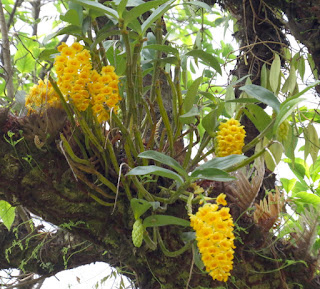 Birds are very responsive to pishing and owl imitations (Asian Barred and Collared Owlets are the species here), including this normally very secretive Red-billed Leiothrix (not a lifer; I had seen it on Hawaii). 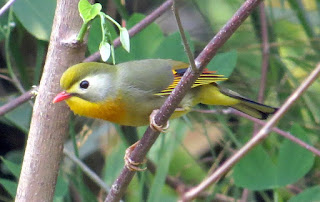 This Mountain Bulbul was a lifer though, and it came in quite well to one of the mobs I stirred up. 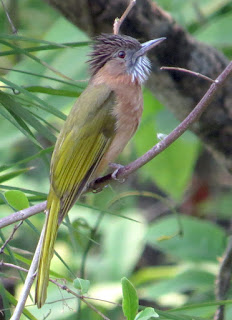 We took another tea break along the way, and Andrew, departing from his usual reading of the Economist and The Week, decided to study my Birds of Nepal. 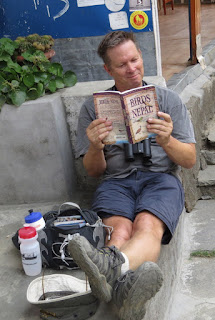 Finally, the jeep track came to an end after 9.8 kilometers of rather gradual ascent, and we finally felt like we were trekking on a real Himalayan trail. 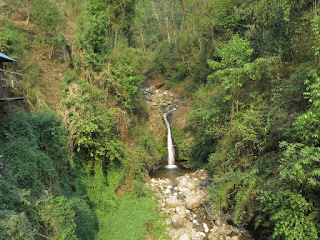 The trail still ascended very gradually for another kilometer or so, but after we crossed this bridge, the steep part began, which Mich had warned us about. 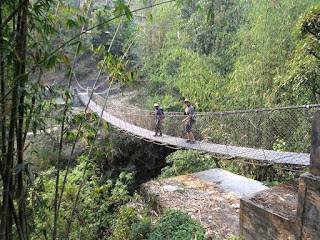 Any excuse for a rest was welcome, and any butterfly would do. This looked like a metalmark, and I was right: Zemeros flegyas, the Punchinello. There relatively few metalmarks in the Old World, with only about 10 species in Nepal. 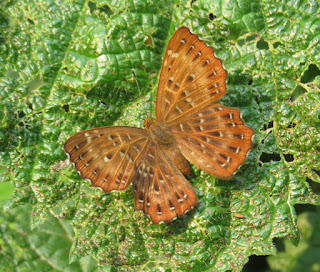 Gray Bushchat became common in open habitats up this high. 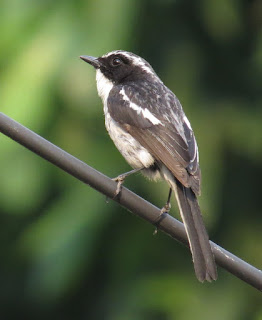 Andrew’s and my big gay trek got even gayer when we came across these humping billy goats. 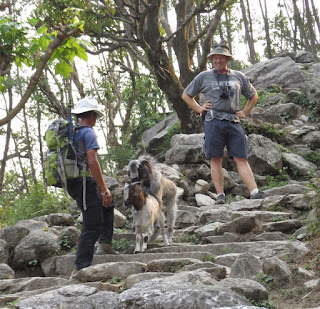 Ananta turns out to be an amazing spotter of birds. I walked right past these Gray-hooded Warbler fledglings, and he rushed back down several dozen steps to show them to me (I usually lagged behind the group, trying to see birds and photograph butterflies). 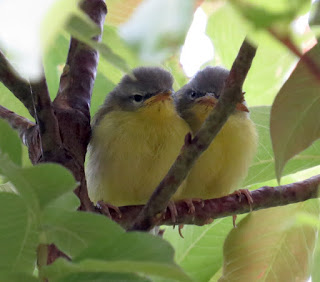 One of the smallest birds in the area, and very difficult to get a photo of, is the Fire-breasted Flowerpecker. 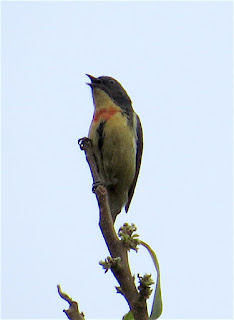 We weren’t in very good forest yet, only with patches of woods in the ravines, but that was enough for a boisterous flock of  White-throated Laughingthrushes. 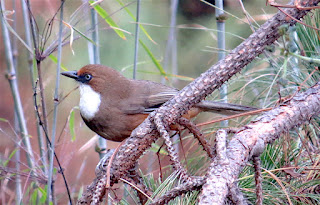 I pished and whistled in a big mob here, and Ananta thought it was hilarious how everything came to close to me. This is Verditer Flycatcher. 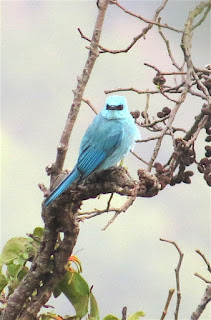 This looks shockingly similar to western Eurasia’s Great Tit, but it’s actually Green-backed Tit (the Cinereous Tit in my last blog is actually more closely related to Great Tit, having been split only recently). 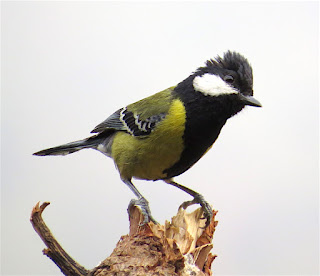 The last bit of steep steps as we arrived in the village of Ulleri. 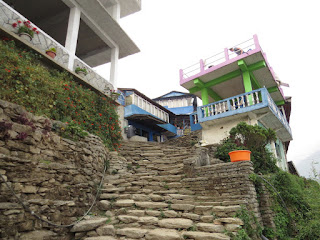 We had time to relax in the garden of Purnima Guest House, which Resham had chosen for our night, and we chatted with some of the other trekkers here, from Germany, Netherlands, and England. 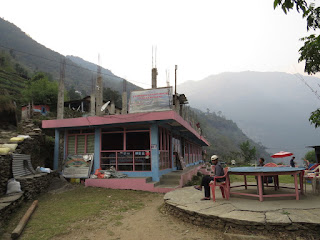 A bumblebee in the roses, the only one I saw on the whole trek. There are probably a couple or three dozen species of Bombus in Nepal, so I didn’t even try to ID this one. 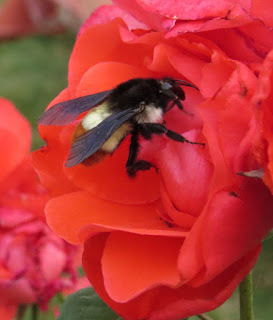 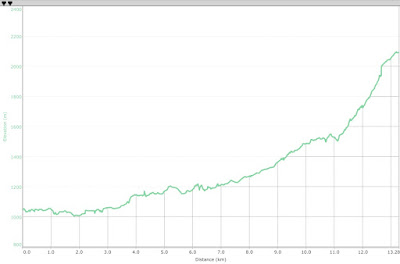 Posted by Birdernaturalist at 5:15 AM