It turns out that one of the main draws to doing a trek in Nepal is the scenery. If you look up once in a while, you should see a different angle on a most abrupt spine of snow-covered peaks that jut up to over 8000 meters (26,500 feet) in elevation. Crazy people climb them, but most people are happy to just see them. Our guide Resham chose this particular hotel for the fine views of Annapurna South (the 10th highest mountain in the world), and this is the view I had just before sunrise. 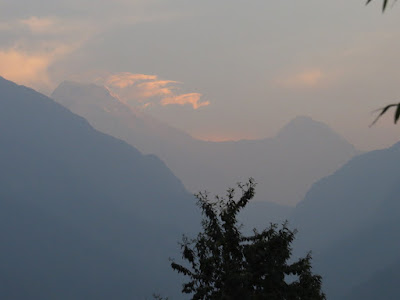 That would end up being the clearest, sharpest view anyone would have of the mountains for weeks. One guy we met suggested that regional humidity and evaporation from the snow fields during these hot days has created the haze. But the haze is in all directions, all over the country. And it’s brownish, obvious in the morning sun or the scarlet moon. There are little and big brush, grass, and garbage fires everywhere in Nepal and India, nothing to stop them, and no rain for weeks to wash the skies. And the air is in fact quite dry, dew disappearing very early in the day. Thank goodness the views of the mountains aren’t my primary reason for doing the trek as it is for so many others, otherwise it would be a near bust. The habitat is amazing, the forests and streams are gorgeous, the exercise is exhilarating, and it’s fun to meet all the other travelers. And of course there are birds, and today we trek through some beautiful habitat from Ulleri to Ghorepani.

We had a relaxed start, coffee in the garden overlooking small fields of wheat and other vegetables, with some scattered trees. The ravine next to the hotel has a small patch of woods from which some Mountain Bulbuls occasionally sang. One of the better birds here was a male Pied Thrush that flew out and sang from an exposed alder tree below the hotel, but it always perched right behind a branch, avoiding having its photo taken. Somehow I managed a photo of this flitty thing in the apple tree, apparently a Hume's Warbler. These Phylloscopus warblers are as bad as our American Empidonax flycatchers, but worse – they never sit still. 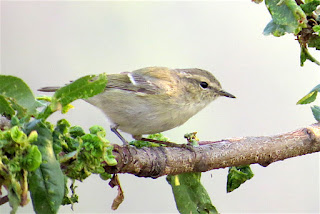 This is Metapora agathon, the Great Blackvein, a member of the white family. 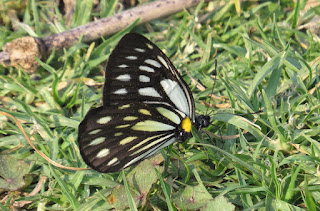 This Gentiana species was very common on the dirt and rock banks created by the terraced farming, but at just a few millimeters across, it went unnoticed by most hikers. 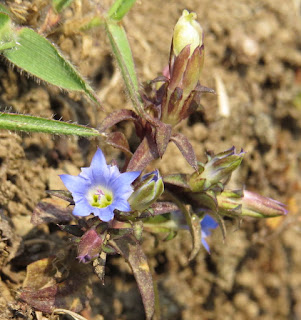 This is how all the more serious trekkers get their camping gear up these trails. Televisions, refrigerators, and all that beer comes up the same way. I stopped feeling sorry for our porter Ananta when we saw the loads that so many porters carry miles and miles up these steep mountains. 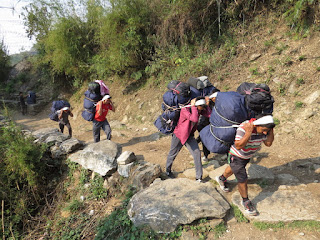 Gray Wagtail breeds here and there in the open farmland, not necessarily on flowing streams like in other areas. 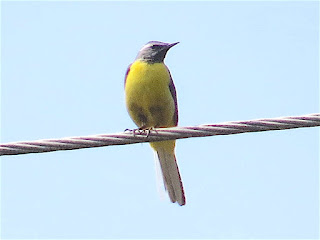 After a kilometer or so through many small farms, we entered some gorgeous forest. Several oak species are among the dominant trees. As you can see, it's hazy everywhere. 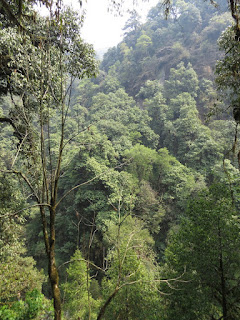 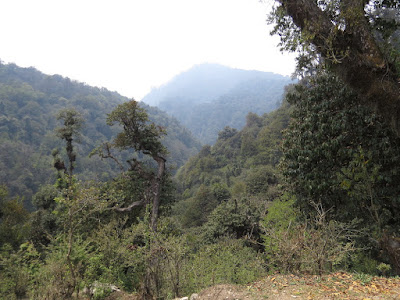 I lagged behind a lot, as there were so many possible new birds for me in this region, and I know virtually none of their voices. I ended up with thirteen lifers today. A singing and very recalcitrant Indian Blue Robin took a lot of time to see and figure out. This Black-eared Shrike-babbler was much more cooperative but still very active; I spent a lot of time trying to get photos – totally worth it, my favorite bird of the day by far. The shrike-babblers were once considered babblers, but that family has now been split up into several families, some of them quite distant from the others, phylogenetically speaking. Perhaps most distant are the shrike-babblers which turn out to be more closely related to the New World vireos, and they are currently placed in that family. They are actually quite reminiscent of the shrike-vireos in their striking colors, behavior, and song. 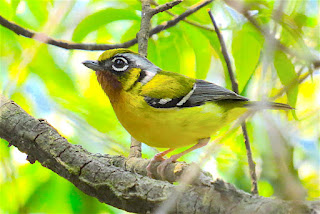 This is a Hoary-throated Barwing, a member of the laughingthrush family, another of the former split-up babbler family. 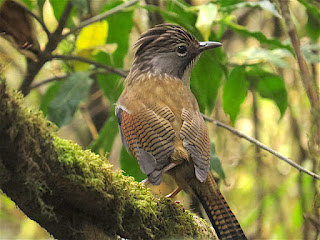 As we got higher, rhododendrons started dominating the forest. 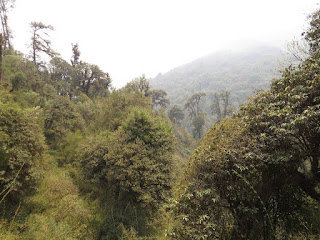 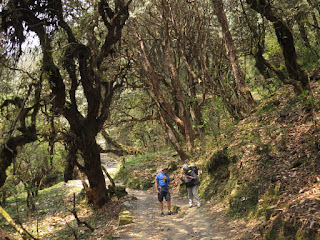 I was puzzled by my first Rufous-gorgeted Flycatcher, a female. I then later found this male, and then another, and another. It’s one of commoner, if not very conspicuous members of the avifauna here. 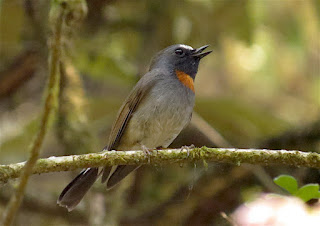 This “cobra-lily” was common in places; it appears to be Arisaema nepenthoides, the specific epithet indicating that it closely resembles the unrelated insectivorous plants in the genus Nepethes. 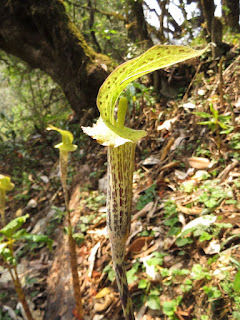 We passed through a couple of small communities with small farms, hotels, and restaurants. This is where I saw my lifer Lammergeier. 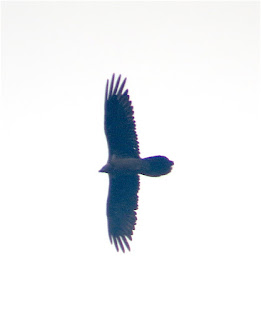 A Eurasian Kestrel was hunting in one of these open areas too. 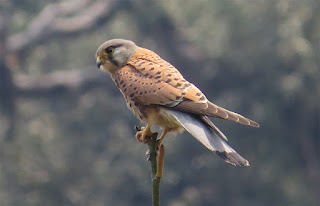 This is Childrena childreni, the Large Silverstripe. It’s related to what we call fritillaries. 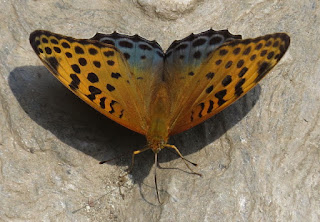 We passed through the town called Lower Ghorepani before another long series of steps. 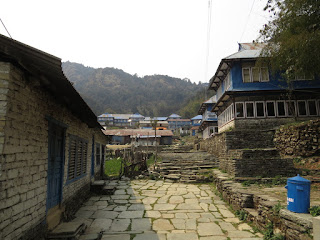 Then we were in our final destination, Upper Ghorepani. Andrew waded through these mules to get to our hotel. 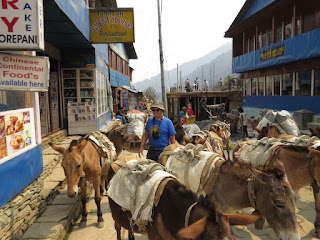 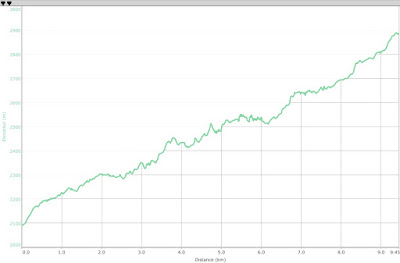 But we weren’t quite done. After a nap and relaxing time in our hotel (which again was supposed to offer a stunning view of the mountains), Resham took us on the steep climb up to Poon Hill. On the way I stopped for birds – a Collared Owlet was tooting from a tree while holding a small rodent in its talons and being harassed by an Ashy-throated Warbler. Another mixed flock had this Chestnut-tailed Minla, apparently carrying food to a nest. Minlas are former babblers, now with the laughingthrushes. 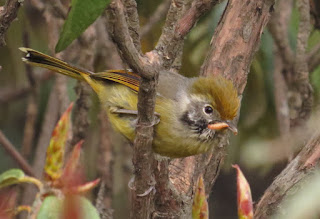 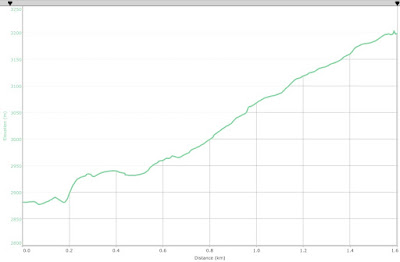 It reminds me of my favorite Marys Peak in Oregon’s Coast Range, with a ring of fir forest and rhododendron shrubs and small meadows around the peak. Different birds are here too –  I managed to see Coal Tit and Grayish-flanked Bush-Warbler in the dwindling daylight. 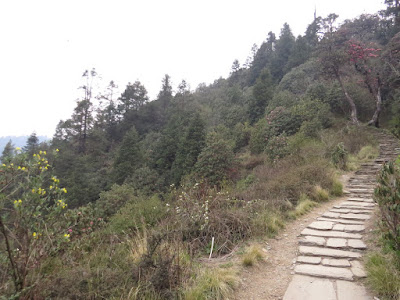 We could just barely see Annapurna South from here, supposedly one of the more spectacular vistas of the Annapurna massif when it’s clear. We were the only ones here and enjoyed a delightful whiskey on the benches until after sunset. We were grateful for Resham’s suggestion to avoid the pre-dawn crowds that gather for sunrise. That’s another one of those things you do here; don’t ask questions. 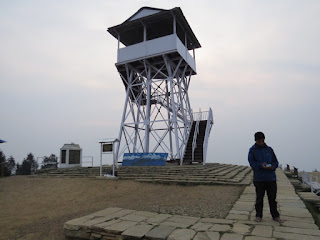 Not far down the steps as it was getting quite dark, we heard a distinctive two-noted owl hooting from the scattered fir trees. Looking through my field guide (a 16-year-old edition of Birds of Nepal) I decided the only option in this habitat was Tawny Owl, except this sounded like no Tawny Owl. Indeed, I later found that it has long been split and is now called Himalayan Owl. I got the following recording.

Posted by Birdernaturalist at 8:52 PM