A Higher Cult of Mortals 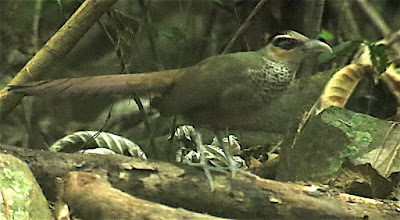 It’s amazing what you can see in just five days at Cristalino Jungle Lodge. On this private tour I’m currently leading for a Finnish couple (with their two kids and a nanny in tow), we saw and heard almost exactly 300 species of birds in just four full days at Cristalino, including some really good ones. Three of them I’d seen only once before (and two were lifers just last year in other parts of Brazil), one was a bird I had only heard before, and two were new for the private reserve’s already huge list, nearly 30 years old.

The title of this blog is stolen from a Robert Cushman Murphy quote after he had seen an albatross. But we now belong to a truly select group of very fortunate humans who have laid eyes on a Scaled Ground-Cuckoo – the bird I had heard once before while leading a tour here. Quick history on this species here, with nearly unicorn status anywhere: One was glimpsed here in the late 1980’s, and then not again until the early 2000’s. A couple more sightings followed, but it still wasn’t settled as recently as five years ago what species they referred to, so brief were these sightings (Rufous-vented Ground-Cuckoo is similar and also very little known). Then began Jorge Lopez’ quest to document the bird. For the past four years he and Francisco de Carvalho Souza, both fabulous local guides and boatmen who have been working for Cristalino since about the beginning of the enterprise, have been quietly and very gradually habituating these extraordinarily shy birds to a bird bath and feeding station (with earthworms). About three years ago Jorge let me and others in on his secret with the first photos. Then last year he had video to show. But he didn’t think the birds were ready to show tourists until this year, and even now it turns out to be a very iffy prospect. Apparently one bird or a pair will come in two or three days in a row, then vanish for 3 weeks or a month, confirmed with motion-sensitive camera traps. On one of our afternoons this past week, Jorge told me that his previous day’s worms had vanished, and that the cuckoos must be coming; he suggested we change the afternoon plan to boat upriver and sit still for an hour watching his feeder from a screened bench in the forest. OK, change made! We waited only 1/2 hour before we heard the bill snapping between two birds, and one came in three times to eat the worms he hung from little nooses over the bird bath. While we waited a Barred Forest-Falcon came in for a drink as well. As far as I know we were the first lodge guests to have this privilege. Jorge has taken a few of the local guides and special friends there, and until now perhaps only six people had seen them. One of the local guides has been there 10 times without seeing it. The next day, Jorge dared take a larger group of 9 well-behaved birders from a Rockjumper tour, hoping the birds would come a third day in a row. They didn’t, highlighting again for us how lucky we were. I had my spotting scope set up on the spot and digiscoped these grainy shots in the dark forest understory. 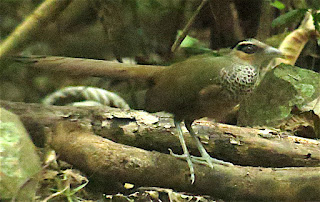 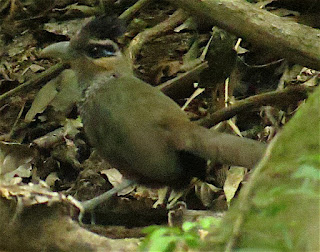 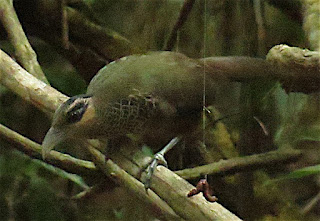 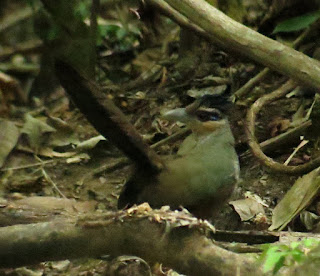 Another one of the surprise birds was a Black Manakin, a first record for the Cristalino area. We saw it briefly a couple times, Jarmo Komi snapped some photos, and I sort of forgot about it, as we proceeded to see another 75 species that day. At lunch we showed the photos to some others, eliciting mostly shrugging of shoulders. But at our evening checklist session, we came to the manakins, and that’s when it hit me what it was. Birds are known from very isolated locations about 50 km north and about 100 km south, but in both places on a very short, scrubby and viny forest on white sandy soils. This was an immature male, probably a bit lost after dispersing from one of those areas, having found a bit of similar looking habitat on the Manakin Trail. This is my photo of Jarmo’s camera screen. 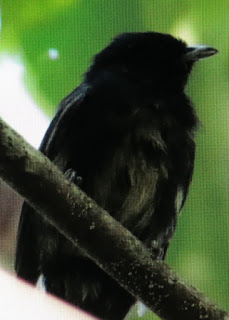 Then another amazing find, right after the manakin, was this Rufous-tailed Attila, a little known bird in the Amazon Basin where it apparently winters very sparsely. In the austral spring it heads back to the more temperate SE Brazilian rainforest to breed. Stupidly, this is my third one here of about 6 local records now, to the consternation of all the local guides, some of whom have Cristalino lists larger than mine. 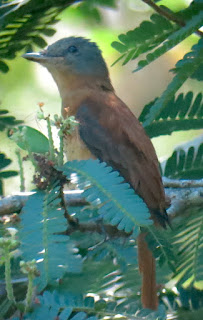 On our hike up the Serra, we tooted in this Amazonian Pygmy-Owl which was precisely the lure we needed to bring in the continuing female Fiery-tailed Awlbill, which we saw briefly, but didn’t get photos of. I had seen one 9 years ago, the photo of which was the first documented record for Cristalino and the state of Mato Grosso. 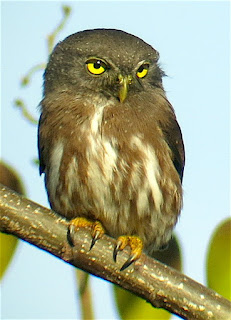 The final “rarity” I found was a Striped Cuckoo on the lodge grounds. This is a common bird with a large range, but it is a recent invader to the shrubby pastures that were all pristine rainforest just 30-40 years ago. Well within the forested Cristalino reserve it was a big surprise. I first saw it feeding on moths and spiders on the side of the guides’ dorm, and then it flew up to the roof of the old kitchen where it sat for a couple minutes as it raised and lowered its crest while thumbing its black alula. The photo isn’t worth sharing.

One of the hallmark birds for Cristalino is the Cryptic Forest-Falcon. They’re not rare here, but they can be very quiet and sometimes shy, unlike this bird that perched over our heads. It was here at Cristalino some 20 years ago that Andy Whittaker first recognized this as being different from the more widespread Lined Forest-Falcon, and he described it as a new species in a paper published less than 14 years ago. 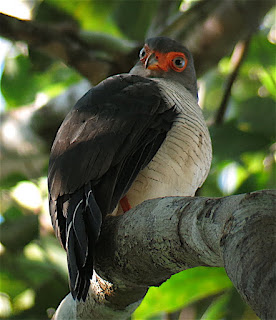 Cristalino is so much more than just birds. This family of Giant Otters was in the river as we were arriving, and we drifted downstream with them until they clambered on this rock. What a greeting committee!

Inger spotted this very quiet Southern Tamandua in a vine tangle over one of the trails one afternoon. I’ve seen only 3 or 4 here over the years. 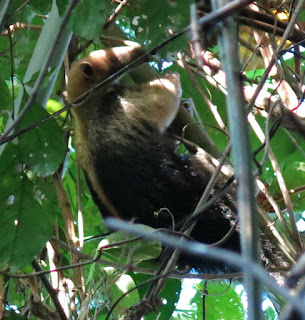 I went to the rocks on my own one evening to look at fish. I had never seen this long-nosed thing before, and there were several there. It appears to be a pike characin of some sort, according to Gavin Bieber.

Gavin suggests this is an Ancistrus sp., bushy-nosed catfish, and that’s about the closest you can get to an actual name for virtually any fish here, so little known is the piscifauna. 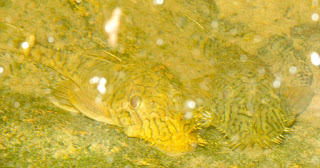 This butterfly look-alike is actually a cane-borer moth in the family Castniidae. Best match with online photos is Castnia icarus, the prettiest I have seen. 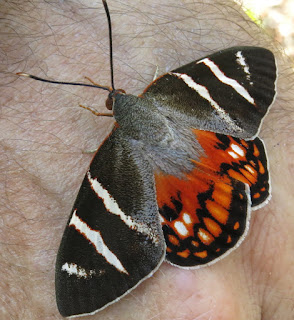 While on the Serra we saw the usual Cyrtopodium sp. orchids, even some in bloom, but new to me was this Encyclia cachimboensis, a plant which I’ve obviously walked past several times, but never in bloom. It has a wonderful floral perfume, slightly spicy. 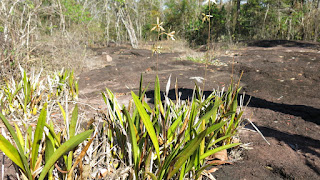 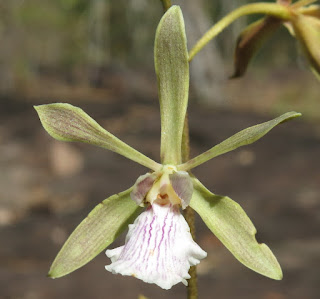 Butterflies on the beach were underwhelming, despite my efforts. It’s perhaps too early in the season; numbers seem to peak just before the rains in early September. Neographium thyastes, Orange Kite-Swallowtail is always a nice find though. 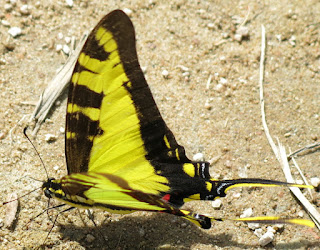 I’m slowly trying to learn spider families, most of which can be identified simply on the basis of the eye placement. Most spiders have eight eyes, and a while back I had already identified the common large, flat spiders on the rocks by the river as members of the mostly neotropical family Trechaleidae. 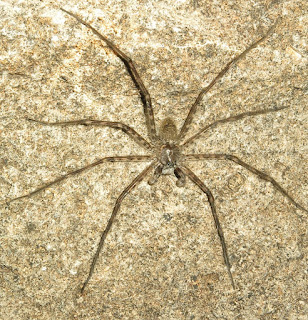 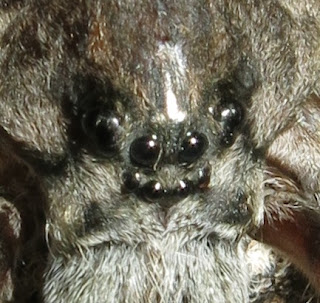 This much smaller one looked very similar, but it was on a tree trunk well inside the igapó forest on the Manakin trail. A close-up of the eyes shows that it has the same arrangement so I assume it’s in that family. 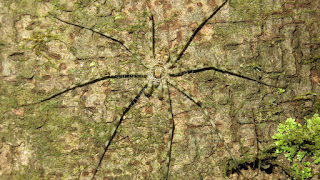 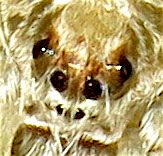 A final photo of dawn at Tower 1, a memorable vista with an unforgettable soundscape. 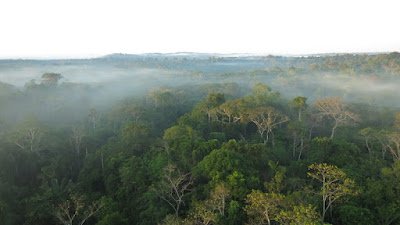 Posted by Birdernaturalist at 7:07 PM