I was at home just a week between tours, but I got a lot done, not just editing all the photos from the Galápagos. In the garden I sowed about a hundred black-eyed peas as a suggestion for a nitrogen-fixing green cover, and I bought another tomato plant (guess what happens when the landlord turns off the automatic drip timer and doesn’t water until it’s too late…). The first pea was out in just 4 days, a ton more after 5. It should be a veritable carpet when I get back.

I missed the 117.5°F temperature on the 19th, just as forecasted. But then we did get some nice  early rain. About 1 1/3 inches fell in a big storm the day before I came home, and then we had another 3/4 inch in two different long, slow night rains early in the week. So even before the traditional average starting date of the monsoon (July 5 in the past) we’ve received a third of the average allotment. Then again, we might night get any more the rest of the summer.

A big cholla cactus toppled from too much water, so I carefully chopped it up and worked it in into two big compost piles, layering with old straw, wind-blown leaves and bark from the Eucalyptus after the storm, and partially finished compost from the previous pile. That took parts of 3 days.

After the second long rain, this Incilius alvarius, Sonoran Giant Toad was on my doorstep eating the insects attracted to the porch light. It’s the first I’ve seen in the yard. 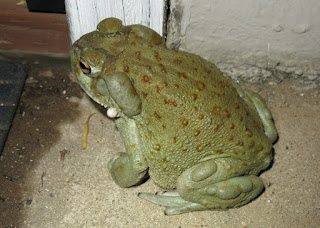 This is what it left the next morning, which had Paul really guessing. It’s mostly indigestible beetle elytra and wings. 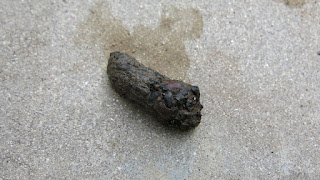 This jeweled flower beetle is Acmaeodera gibbula, the first one I’ve seen in the yard; sadly it was dead in a hummingbird feeder moat, but there aren’t many flowers to be looking at yet. 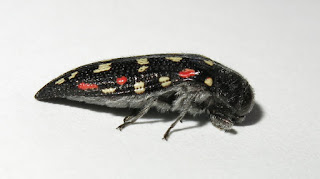 My spearmint was doing really well, then just two days ago it suddenly looked like this, overnight. 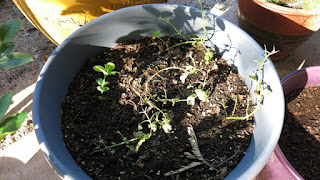 I looked very carefully and found three little green caterpillars, and by using the handy “site:” search feature looked for the word mint at the MPG (moth photographers group) website. After cross-checking with Bugguide, I’ve decided they almost have to be Pyrausta laticlavia, Southern Purple Mint Moth, though there are no photos of caterpillars online. Other mint-feeding Pyrausta species have similarly shaped caterpillars, though most have more distinctive stripes, and they don’t seem to be known from Arizona. In any event, I put them in a small jar with some leaf litter and sticks, capped it with cheese cloth, and will inspect it for moths when I return in 3 weeks. One had already started to pupate in a loose webbed cocoon yesterday. 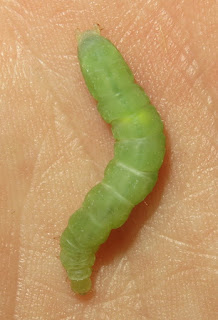