WINGS Marvelous Mato Grosso Tour: Deep in the Heart of the Pantanal – Jaguars and More

On my tour in late June, we made several stops on the Transpantaneira Highway on the way south from our lodge at Pouso Alegre to Porto Jofre. We spent most of our time in the late afternoon close Porto Jofre, and then birded much of the morning on it as we headed back north three days later. We saw many species only on these drives, the standout being this rare White-naped Xenopsaris. 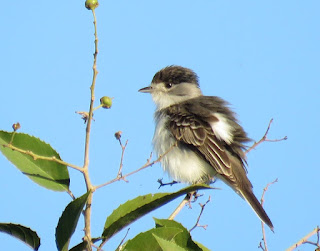 This rusty-tinged Grayish Saltator was not typical; perhaps it was stained from having taken a recent dust bath? 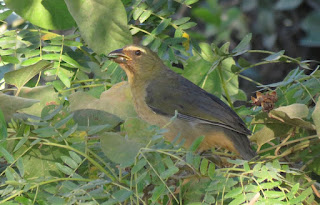 There are probably lots of butterflies here during and immediately after the rainy season, from December through April, but it’s been weeks since the last rain, a couple of cold fronts have passed through already, and we haven’t seen very much diversity. This is the widespread Strymon astiocha, Gray-spotted Scrub-Hairstreak. 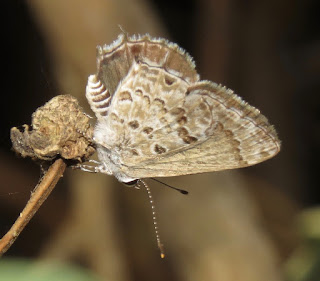 Close to our Porto Jofre hotel were several of these gorgeous day-flying moths Hypocrita plagifera. 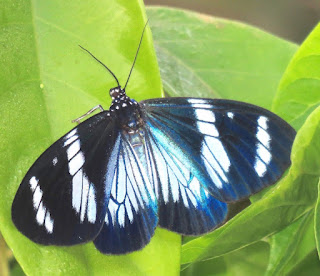 On one night drive we stopped for this tarantula species, for which I haven’t yet found a name. 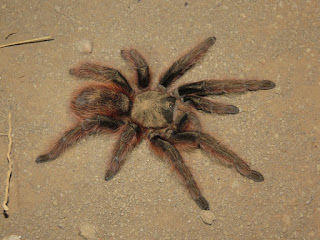 One of the most ubiquitous birds in the Pantanal is the Yellow-billed Cardinal – seen around ranch buildings, in roadside hedgerows, and along the rivers during our boat trips. 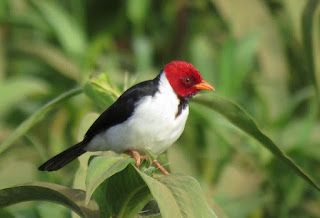 Other additions along the Transpantaneira were a difficult-to-find Subtropical Doradito, adorable Little Cuckoos, a single Striped Cuckoo, our only White-tailed Goldenthroat (making this one of very few tours ever to see both goldenthroats), a Sungrebe swimming along at one bridge, and an American Pygmy-Kingfisher that came in very close in the bushes right below the birders. Other favorites mentioned from there were the strange Southern Screamers, a Great Horned Owl hooting during the day in the mango grove, very close Striated Herons, multitudes of Limpkins, a super colorful pair of Orange-backed Troupials, a cooperative Fawn-breasted Wren in a dense vine tangle, a flock of Nacunda Nighthawks, handsome Rusty-collared Seedeaters in roadside grasses, a White-rumped Monjita foraging from the power lines, and this White-wedged Piculet twitching incessantly on a branch overhead. 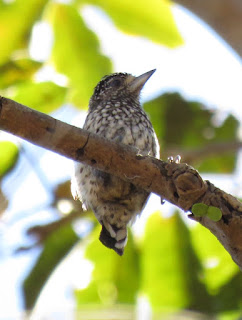 At Porto Jofre, we were again greeted by numerous Hyacinth Macaws on the grounds, providing for endless entertainment, but most of the excitement was on the boat rides up river, where we explored the curixos (creeks and oxbows) of Charlie’s, Negro, and Ilha, as well as the Tres Irmãos River tributary of the Cuiabá. On the first morning we interrupted our first stop for birding on the main river by following up on a radio report of jaguars up the Tres Irmãos. In less than an hour after setting out from the hotel we were already looking at our first jaguars, the mother-daughter pair of Ginger and Amber. It was still rather dark for good photos, and they soon disappeared into the brush, but were elated and looked forward to a more relaxed morning of birding from the boat, with maybe just a chance of seeing another jaguar. Amber is on the left, Ginger is on right. I had our boatman take us up Charlie’s Creek, where we enjoyed good views of duetting Black-capped Donacobiuses, our first of many very nice Rufescent Tiger-Herons, and Ashy-headed Greenlet when we spotted another Jaguar, which we later learned was Carly, famous for climbing trees and dropping into the water to catch the abundant yet wary Yacare Caiman. We stayed with her for over an hour in hope of witnessing such a feat before we moved on to find more birds. 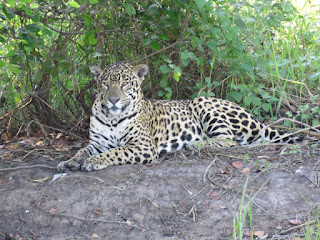 We took two more boat trips up river, the same afternoon and the following later morning, seeing two more individual Jaguars – Salima and Hunter – as well as a repeat viewing of Carly about 1.2 kilometers from where we had seen her earlier. Here’s Carly, on one of her favorite elevated perches later that same day. 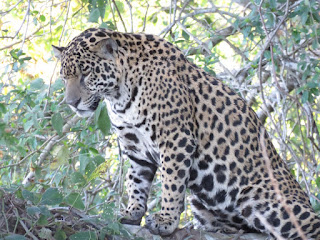 Hunter we watched for only about 5 minutes before she did a quick left-hook leap into the partially submerged grass below the bank and caught a small caiman right in front of us. The entire maneuver was way to brief to get a photo. 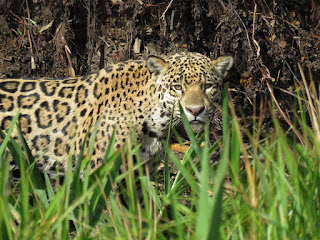 Salima was on the main channel of the Rio Cuiabá as we headed back to Porto Jofre for the last time. 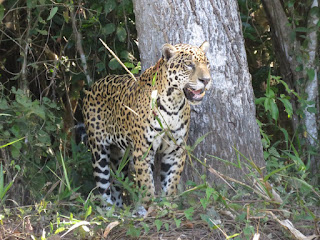 Some of the birds we enjoyed as we boated to and from the jaguar areas were on the sand bars. Here is Black Skimmer, one here in a typical resting posture. 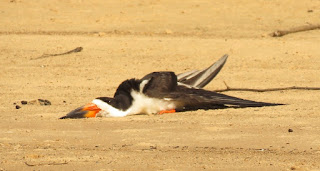 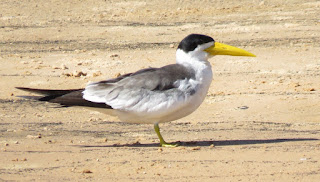 Black-capped Donacobius is interesting enough to see as they forage and flit in the riverside vegetation, but it’s a marvel to see a pair duet – they bow, wag their tails, and inflate their neck sacs. 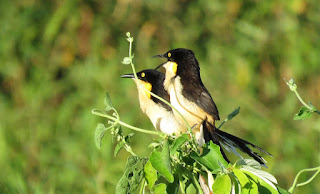 We also had Orange-backed Troupial, Crimson-crested Woodpecker, and a family group of White Woodpeckers frequented the narrow gallery forests. An amazing sight as we boated back at sunset was a flock of about 40 Snail Kites drifting over the river on the way to their communal roost, while at the same time countless Band-tailed Nighthawks and both Greater and Lesser Bulldog Bats emerged from their daytime hiding places to forage over the river. Of course in addition to the birds, we enjoyed the many Capybaras and even a few Giant Otters (one enjoying a personal spa treatment), as well as Green Iguanas basking on the riverbanks. We saw several Black-collared Hawks, but almost always as individuals; three on one branch was unusual. 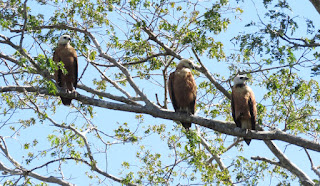 Here are two of the Giant Otters. 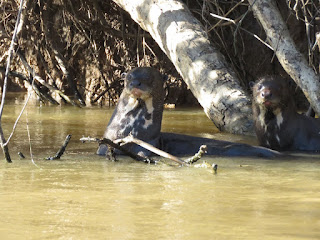 As we departed our Porto Jofre hotel, Southern Caracara, Great Black Hawk, and Bare-faced Curassow consorted on the private airstrip. 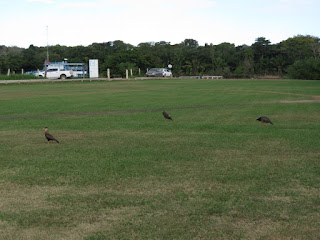 We made a few stops on the way back north, but this Scarlet-headed Blackbird was undoubtedly the best bird. 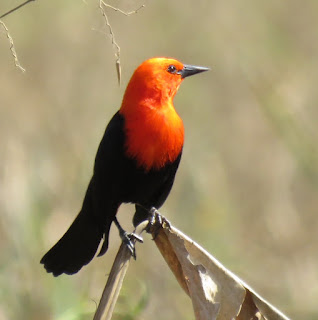 Our final morning of birding in the Pantanal was on the grounds of Pousada Piuval in the much drier northern edge of the region. Highlights included couple of Greater Rheas right outside the yard, Pale-crested Woodpeckers along the driveway, and many new birds on the loop trail though the “cordilheira” forest, including Streak-necked Tody-Tyrant, Gray-headed Tanager, Olivaceous Woodcreeper (of the Bolivian viridis subspecies), Crane Hawk, an uncommon Dull-capped Attila, and Crimson-crested Woodpecker (surprisingly numerous, including a pair excavating a nest). 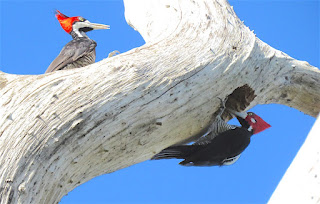 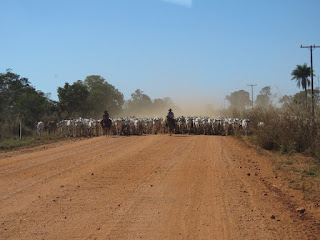 Posted by Birdernaturalist at 3:54 PM