My First Time to Iguazú Falls

To finalize my Brazil tour blog from this past June-July, I’ll just post some photos from our extension to Iguazú Falls. The whole tour group from the Marvelous Mato Grosso tour signed up for the extension, which made the logistics a bit easier than if there had been multiple departure times from the Cuiabá airport. We flew as a group from there to São Paulo, and then from there to Foz do Iguaçu, the city on the Brazilian side of the border. But for the better access to habitats and viewing of the falls we transferred by bus to our hotel near the town on the Argentinean side of the border called Puerto Iguazú.

Since I had never been there before, WINGS hired Argentinean birder and biologist Julian Quillien Vidóz to be our local guide. I had birded with him in one day Bolivia eight years ago, just as he was beginning his guiding career, so it was a real treat to bird with him again. 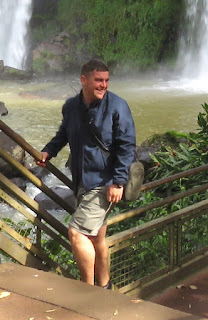 We made the most of our mid-afternoon arrival at the town of Puerto Iguazú, first finding this Buff-bellied Puffbird behind the hotel, my first of four lifebirds. 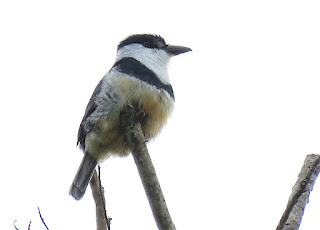 In a short check of the hotel’s garden, we found Ochre-collared Piculet and Ruby-crowned Tanager (even seeing the difficult ruby crown spot). Then at the well-known Jardín de Picaflores in town we saw Black Jacobin, Swallow-tailed Hummingbird, Planalto Hermit, Violet-capped Woodnymph, Versicolored Emerald, White-throated Hummingbird, while Chestnut-bellied Euphonia briefly visited the bananas and a Blue Dacnis insisted on visiting only the bright pink hummingbird feeders for quite the clash. This hummingbird didn’t quite fit any of the possible species here, and I presume it’s a hybrid Versicolored Emerald x White-throated Hummingbird. 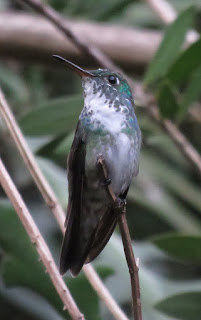 Mixed flock activity was high during our morning along the 101 road that crosses the national park, both in terms of numbers of birds and where in the trees they were. Creamy-bellied Gnatcatcher was the best find (and another lifer for me), though it was hard to pin down in the tree tops, while Green-headed Tanager and Surucua Trogon were a little more cooperative. Even better was an Ochre-breasted Foliage-gleaner that came down much lower for great views. It was quite cool in the morning (being mid-winter here, and only subtropical in latitude), but the sun warmed things up to the mid 70’s F, and butterflies soon became easier to observe than the birds. This region is famous for its abundant butterflies, at least in summer. I photographed just a few. This skipper I recognized from my first trip to Brazil, a very long time ago: Trina geometrina, Geometrina Skipper. 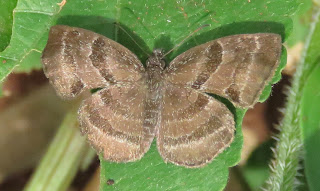 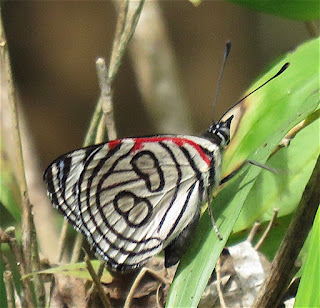 The left of these two eighty eights is harder to identify than I had first assumed and leave it to genus, Diaethria sp. The one on the right is Callicore pygas, Pygas Eighty-eight. 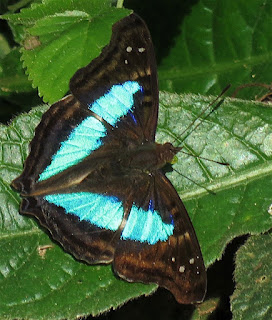 I know a few hairstreaks in the genus Arawacus, all black and white striped, so I was surprised to find that this one was in the same genus – Arawacus meliboeus, Meliboeus Stripestreak. 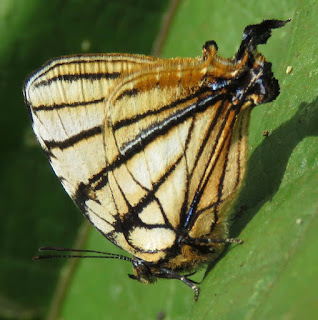 The sisters are very difficult to identify, but I think I got this one down to Adelpha melona pseudarete, Melona Sister. 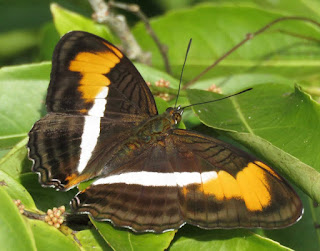 Birds in the national park were acclimated to throngs of people (though we were thankful to be there in the low season, with fewer tourists than normal), making them quite fearless. By the entrance we pished in quite a mob that included several common birds, such as this Rufous Hornero. 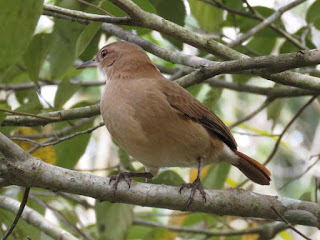 A pair of Great Kiskadees joined the melee. 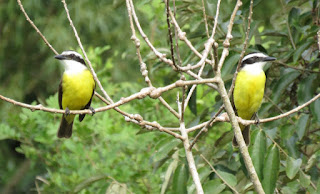 Red-crested Finch doesn’t always show its crest so well as when it thinks there’s a Ferruginous Pygmy-Owl to be harassed. 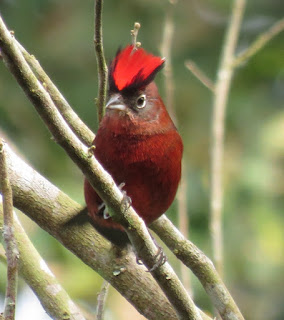 We got close looks at splendid White-bearded Manakins, Golden-crowned Warblers, and a pair of Riverbank Warblers, while Toco Toucans were nearly as easy to see on the boardwalk to the falls. The flight of Great Dusky Swifts came too late for us to see them at the falls but it was still amazing to see probably well over a hundred of them heading towards the falls during and after our relaxed walk and train ride back.

This Magpie Tanager was one of a pair that showed no fear on the walk to the lower waterfalls. 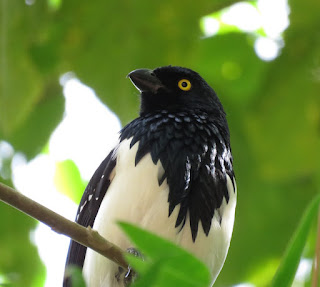 These Plush-crested Jays were used to getting handouts from the tourists that took the little passenger train to and from the main falls viewing site. 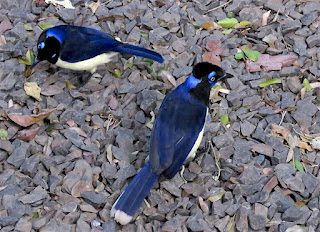 It was about a kilometer walk on a boardwalk to the main waterfalls, and it crossed several small islands in the river which had habitat for birds. Along the walk was this Tropical Parula. 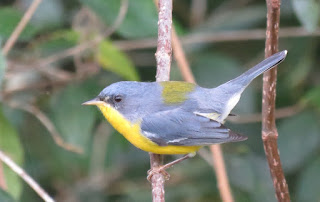 This Boat-billed Flycatcher provides a nice contrast to the Great Kiskadees from earlier. 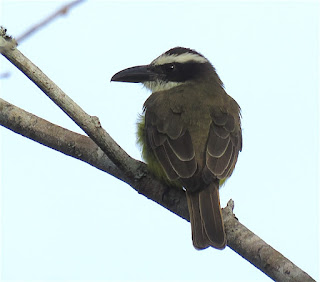 As we departed the national park, an utterly fearless Southern Lapwing stood on the paved walkway near the ticket booths and posed for portraits. 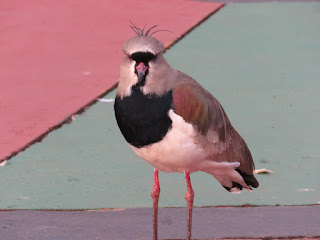 Our final morning of birding was at Urugua-í National Park, which began with a very lucky sighting of Black-fronted Piping-Guans on some riverside rocks below the bridge by the guard station. On the trail system we caught up with a confiding Scale-throated Hermit, Sepia-capped Flycatcher, and the distinctively yellow Southern Bristle-Tyrant (another lifer; like a big and yellow Eared Pygmy-Tyrant, which was also there). We made a quick stop en route and scored quickly with Gray-throated Warbler-Finch (my fourth and final lifer) and the appropriately named Araucaria Tit-Spinetail. This Blond-crested Woodpecker was one of the day’s highlights from the provincial park. 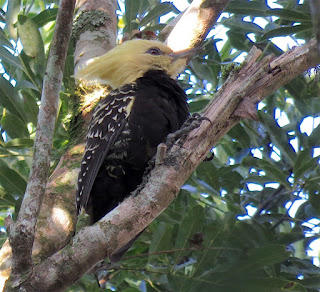 We then finished up the afternoon birding near the hotel with a distant Black-and-white Hawk-Eagle in flight (amazingly, our second of the tour and the only hawk-eagle species we saw, even though it’s the rarest of the trio) and a pair of Rufous-capped Motmots. 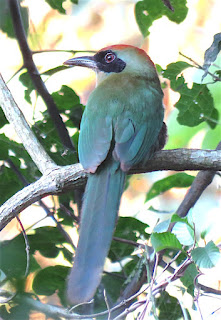 We did try for owls, but there was little activity, save for a heard Solitary Tinamou that whistled just once. It was quite chilly, but that didn’t stop me from finding a moth, which had an unusual enough wing shape that I correctly guessed that it was in the family Uraniidae, related to the day-flying swallowtail moths in the genus Urania. This is probably in the genus Psamathia, but the genera Nedusia and Syngria are similar. 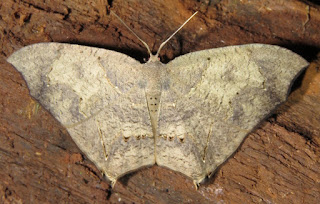 The tour’s official birding ended with a short walk near the hotel where Plain-winged Woodcreeper, Southern Antpipit, and a gorgeous male Spot-backed Antshrike popped up into view for an appropriate grande finale. On the road by our hotel was this big and fancy hairstreak Theritas lisus, Lisus Hairstreak. 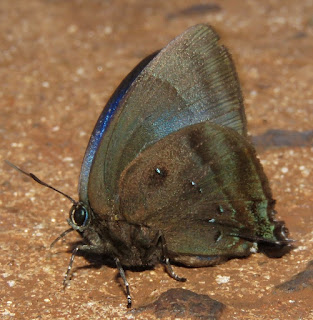 Posted by Birdernaturalist at 9:24 AM