Every day is different in the rainforest. You never know what’s going to appear, and you need to be ready at every moment for something surprising. Today, that surprise came as a message over the radio in the morning – Harpy Eagle about 3 km upriver! We were headed that way this morning anyway, to see what fungi have appeared in recent days on the Castanheiras Trail.

So Susanne, Andreas, Susanne, and I zoomed upriver and were shown the bird by one of the guides. Harpy Eagles are huge (the largest raptor in the New World), with a big, shaggy crest, and massively thick legs. Something wasn’t quite right with this one, but it was very badly back-lit. These digital cameras are amazing though, and in the photos I could clearly see that it was the smaller but decidedly rare Crested Eagle! I’ve seen about 4 before in the past 15 years at Cristalino (and two in Peru and one in Ecuador). 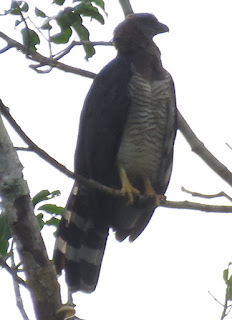 I think the fungi diversity along the trail wasn’t so great today (it was really good here last year), so I usually hung back or birded onward while Susanne inspected things a little more thoroughly. But then I did spot something – a white candle of a fruiting body emerging from the leaf litter. 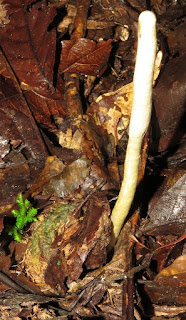 Another cordycepitaceous fungus on a spider – but this time it’s on a big trapdoor spider, one that Susanne knows well and has collected here before. It’s Purpureocillium atypicola, but we didn’t exhume the spider to get a better look at it. 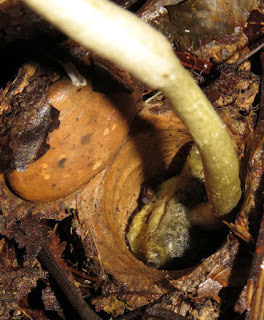 One of the times I hung back, I found this amazing congregation of what looks like owlfly larvae just hatching from their eggs on a small palm leaf rachis. Owlflies used to be in their own family, but now are relegated to a subfamily, Ascalaphinae, in the family with antlions, Myrmeleontidae.

As I brushed the palm something dropped to the ground from the underside onto the leaf litter. It was a moth, playing dead, and where it had been was a second one, larger and fatter, also a bit duller. I recognized them immediately as silk moths, members of the family Saturniidae, but they were unlike any I had seen. Thanks to Ryan St. Laurent, I now know it as Psilopygoides oda, and he says it’s not very common, and females are barely known in collections. 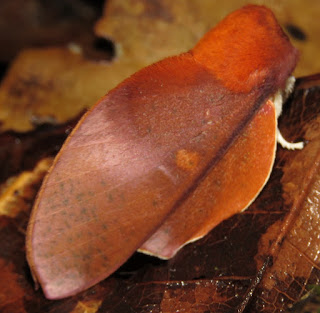 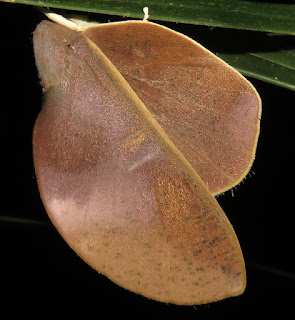 In the afternoon we checked up on a fruiting Connopus sp. that was found by one of the other guides on the Caja trail not far from the lodge. It’s not really known what this mushroom is, as it appears to be rather rare, and this name is a guess. There’s another on the Castanheiras trail, though not fruiting this year (it has been seen in multiple years), and Susanne and I found one at Tambopata Research Center last year. It in all three cases, the mushrooms appear as a huge cluster like this, growing out of a termite mound at the base of a tree or palm. 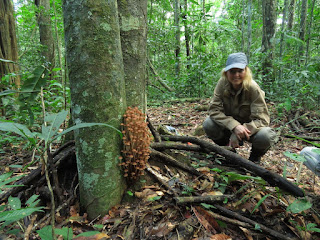 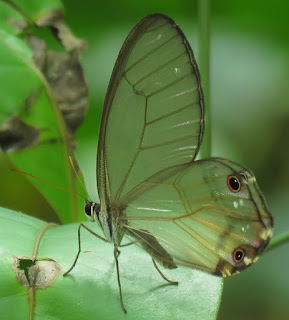 This lovely little slime mold is on a log by our cabins. It is Ceratiomyxa morchella. 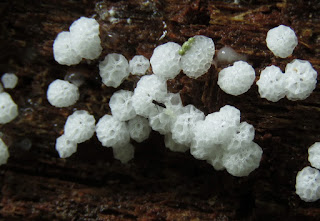 After dinner I went on a night walk on my own around the Taboca Trail to see if I could get photos of the super mean wasps that were found a few days earlier by a family of ecotourists, all of whom got stung, some several times, before their guide realized what was happening. They had taken residence in a hollowed-out log lying right alongside the trail. We knew about it when we went by the next day, but even though we stayed wide of the log and walked fast, one nailed Susanne on the leg through her trousers, resulting in a several-day swollen calf. They were simply unapproachable, during the day at least. I got just two photos on my night walk before I noticed the low-level hum suddenly increase, and I ran like hell for about 50 meters and didn’t get stung. I slowly walked back to them, and as I approached I could see a half dozen or so perched on small trees in the middle of the trail, and before I was even 5 meters from their log, one flew right at me. Of course I ran again and didn’t turn back. The next day guide Sebastião cut a new trail to completely circumvent the log, but I don’t think anyone did that trail again this month. From what I can tell, the wasp is probably in the genus Agelaia, known as one of the more vicious in the Amazon. 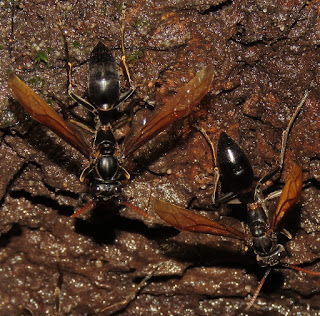 I saw a ton of spiders and other critters this night as well. It was fun to get up close to this Phoneutria reidyi. Yes, this is a wandering spider, and dangerously venomous, but I didn’t try to pick it up. 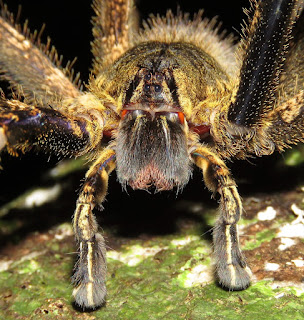 I also stopped to photograph this bark mantis, Liturgusa sp. 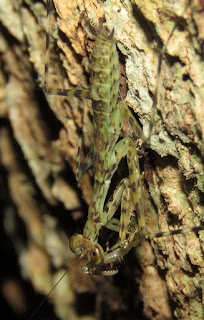