Dawn in the Saguaros

This past Saturday my friend Celina and I made a dawn field trip to the Saguaro forests northwest of Tucson in search of a special item. As we crossed the agricultural flats of Marana, a red sunrise warned us of the heat to come – the low temperature in most areas this morning was only 85°F, and the forecast said it was going to be well over 100. 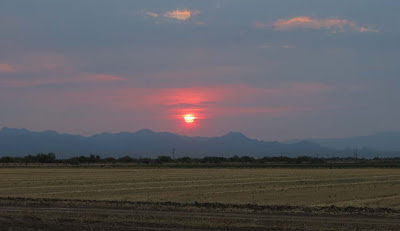 If you have lived amongst Saguaros for a few years, you take them for granted, and most people here don’t even see them any more. But I try to remind myself how utterly amazing and bizarre this huge cactus is. 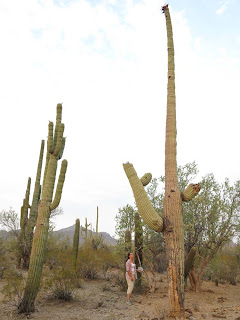 They bloom any time from April though June, with the peak sometime in May. But the season is spread out a bit, and even now you might see a stray flower like this one. 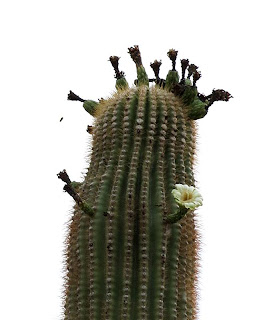 What we had hoped to sample were the sweet fruits of the cactus. Unlike the indehiscent fruits of prickly pear (like tiny watermelons, their flesh is solid and moist, and the fruits do not open), the carpels of the Saguaro fruit split like the peel of a banana, exposing a combined mass of the inner pulp and seeds, which usually separate from carpel walls, fall from the plant, and dry in the sun. 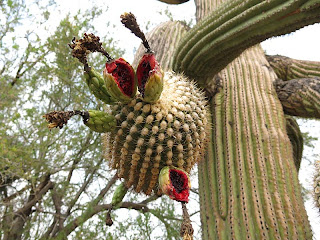 Everything eats them – squirrels, birds, ants – you name it. Even people. If you find a dry one, preferably one that hasn’t fallen into the dirt but instead baked in the sun after falling into the branches of an acacia or other plant  below, the crunchy morsel is like candy. But we were too early to find but just a few – most of the fruits were still unripe at the tops of the columns, and those that were the first to ripen and fall were snatched up by the eagerly-awaiting wildlife. Perhaps in a week or two, when the main mast falls and most animals are saturated, there will be more lying around. There is no more pulp and just a few seeds left to this fruit, perhaps eaten by a Collared Peccary. 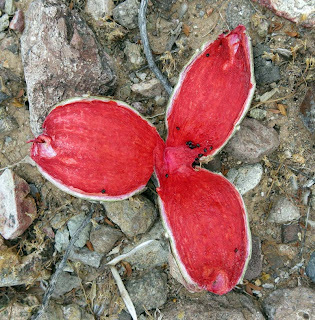 But we enjoyed just poking around in the desert, looking at plants and critters. Most productive was a dead Saguaro that had fallen months ago but was still a rotting mass of flesh beneath its flattened trunk. It was teeming with beetles and their larvae.

Identifiable only as far as genus by me is this clown beetle, Hololepta, in the little known but very large family Histeridae. 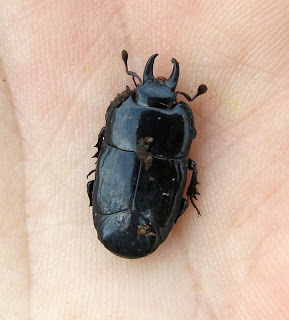 This hyper little thing is a rove beetle, and so far I’ve managed to identify it only as far as family – Staphylinidae. It looks a lot like an earwig but is actually a beetle with short elytra that hide its wings; earwigs are a different order altogether. 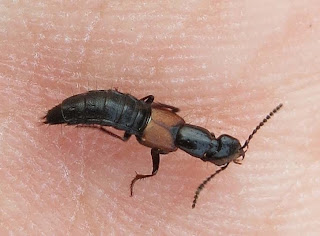 Back at home, it was indeed very hot – up to 109°F. This Bronzed Cowbird was seeking shade in the mesquite right outside my window. 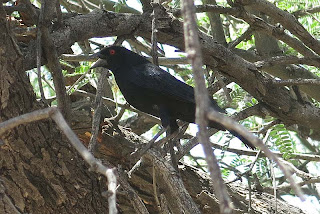 And this juvenile male Costa’s Hummingbird, rather a rarity in my yard, wisely took up residence in the cool(er) breeze emitting from my back door (left open a crack to let the moist air from my evaporative cooler vent) and hung out on the plant stand all afternoon. 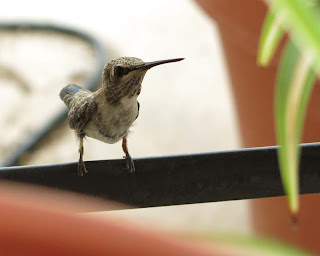 Posted by Birdernaturalist at 1:57 PM