Here are some photos from my fabulous, memorable day on the Atascosa Highlands Christmas Bird Count on December 22nd last year.

Jake Mohlmann, my close friend and now sole compiler of this spectacular and unequalled CBC, assigned me to do the hike into Sycamore Canyon from the trailhead, joined by Alex Baish, a graduate student at ASU. Alex was game for anything, so I suggested we camp, get up early, and get some owls down in the canyon and that way avoid covering the same stretch of canyon twice during daylight hours. 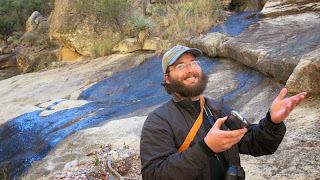 We awoke just before 2:00 a.m. and soon had a pair of Whiskered Screech-Owls at the trailhead, just after Jake came by as he was owling his way down Ruby Road. Alex and I began hiking down at 2:25 a.m.

This is a pretty rigorous hike with two rather tough spots – in the daylight, that is. During the dark, it turns out to be downright treacherous. Here's an older photo from the toughest spot that had me sweating it. 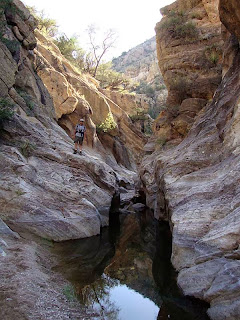 But we made it without injury and had a great day. We heard 8 Whiskered Screech-Owls (seeing two of them), heard a pair of Great Horned Owls, and most amazingly, heard then saw the eye-shine of a caterwauling Mountain Lion. I barely could make out that there was some sort of body below the eyeshines in my head lamp's beam, but that was cool enough.

One of the first birds of the morning was this female Elegant Trogon. This one and another that we heard ended up being half of the 4 seen on this year's CBC. This is the best place in the US for this species in the winter. 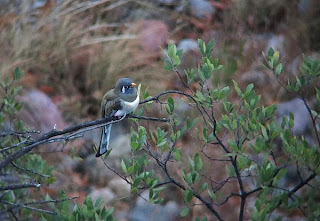 Some scenery shots from the canyon: 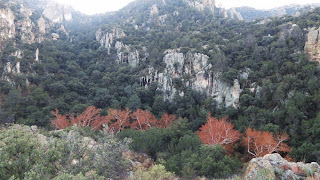 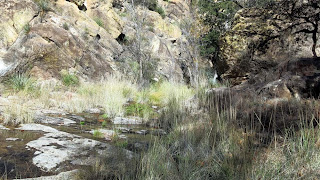 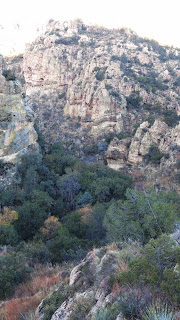 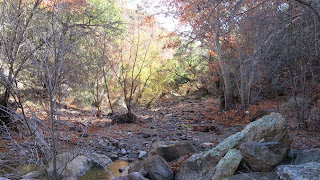 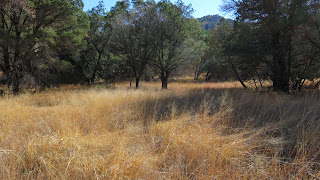 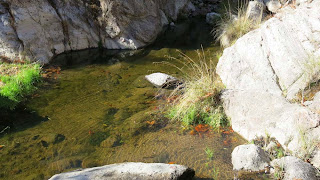 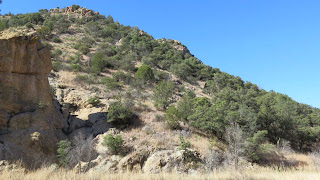 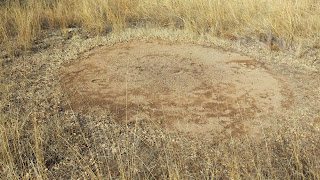 Finally, on the way out of the canyon, we heard the Mountain Lion again, but only very distant, and weren't exactly certain what we had been hearing. Before we got very close to the sound, she had stopped. We had forgotten about it, and perhaps 20 minutes and a couple hundred yards later stopped to pish in a group of birds, and then she started yowling again. She seemed to be in a cave about 50 meters upslope but not visible from where we were (which is probably why she felt safe to start calling again). Her voice came and went as we assume she turned and faced into the cave, just out of sight. I got this recording:

Back at the trailhead, I discovered this Jerusalem Cricket underneath my tent. 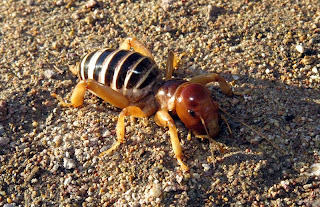 Jake will soon be posting a summary of this great CBC at http://atascosahighlandscbc.blogspot.com.
Posted by Birdernaturalist at 6:45 PM