This last week I birded the Santa Cruz Flats of Pinal County with my close friends and birding guides Keith Kamper, Jake Mohlmann, and Gavin Bieber. We tallied 67 species of birds, including Bendire's Thrasher, Ferruginous Hawk, American Pipit, and Horned Lark, but after many stops to look at weedy fields, brushy hedgerows, and well-watered sod farms, we stopped at a patch of native habitat that hadn't been plowed, graded, or watered – a rare thing in this valley. We were looking for Sage Sparrows.

The name Sage Sparrow is a bit misleading on two counts. It doesn't occur in sage and it's not a sparrow. With Sage Sparrow being officially split into two species this past year, we are now a bit closer to the truth, Sagebrush Sparrow being the name of the Great Basin breeder now known as Artemisiospiza nevadensis. That's its winter habitat in Pinal County, Arizona above. The other half of the split is Bell's Sparrow, Artemisiospiza belli, which has two subspecies.

Here are some definitions to help you understand.

Sage = Salvia. A genus belonging to the mint family, formerly Labiatae, now Lamiaceae, with the familiar square stems, opposite leaves, bilabiate flowers, and a fruit comprising four nutlets. It's a very large genus that includes the common kitchen herb, among many other aromatic plants.

Sagebrush = wormwood = mugwort = Artemisia. A genus belonging to the aster family, also known as composites, formerly Compositae, now Asteraceae, having many tiny flowers in compact heads, all with inferior ovaries, each with one-seeded fruits. Another huge genus, not used commonly in cuisine in this country as far as I know, even though very aromatic, but at least one is used in the classic version of Absinthe. Notice that the new genus of Sagebrush and Bell's sparrow, until recently part of Amphispiza now gives a nod of recognition as this plant being the favored habitat.

Passerellidae = the newly named family of New World "sparrows" or "buntings" formerly lumped with the Old World bunting family Emberizidae, and also not to be confused with Passeridae, the original sparrows such as House Sparrow and the petronias. This hasn't been adopted by any of the taxonomic committees yet, but it's inevitable.

One problem is that the subspecies of Bell's Sparrow (A. b. canescens) that breeds in saltbush desert in the Mohave Desert and San Joaquin Valley looks extremely similar to Sagebrush Sparrow – so much so that field identification is not a sure thing. It is a short-distance migrant, mixes in winter with Sagebrush Sparrows, and has been known to occur as far east as where we were. (The other Bell's Sparrow, A. b. belli, is non-migratory in California's chaparral where its favorite plant is Chamise, Adenostoma fasciculatum, in the rose family, and it looks and sounds quite different.)

In winter, Sagebrush Sparrow leaves the freezing Great Basin and Colorado Plateau sagebrush steppe and winters in lower elevation saltbush desert. Here's the habitat in south-central Pinal County. Scattered mesquites and wolfberry break up the monotony of the saltbush. 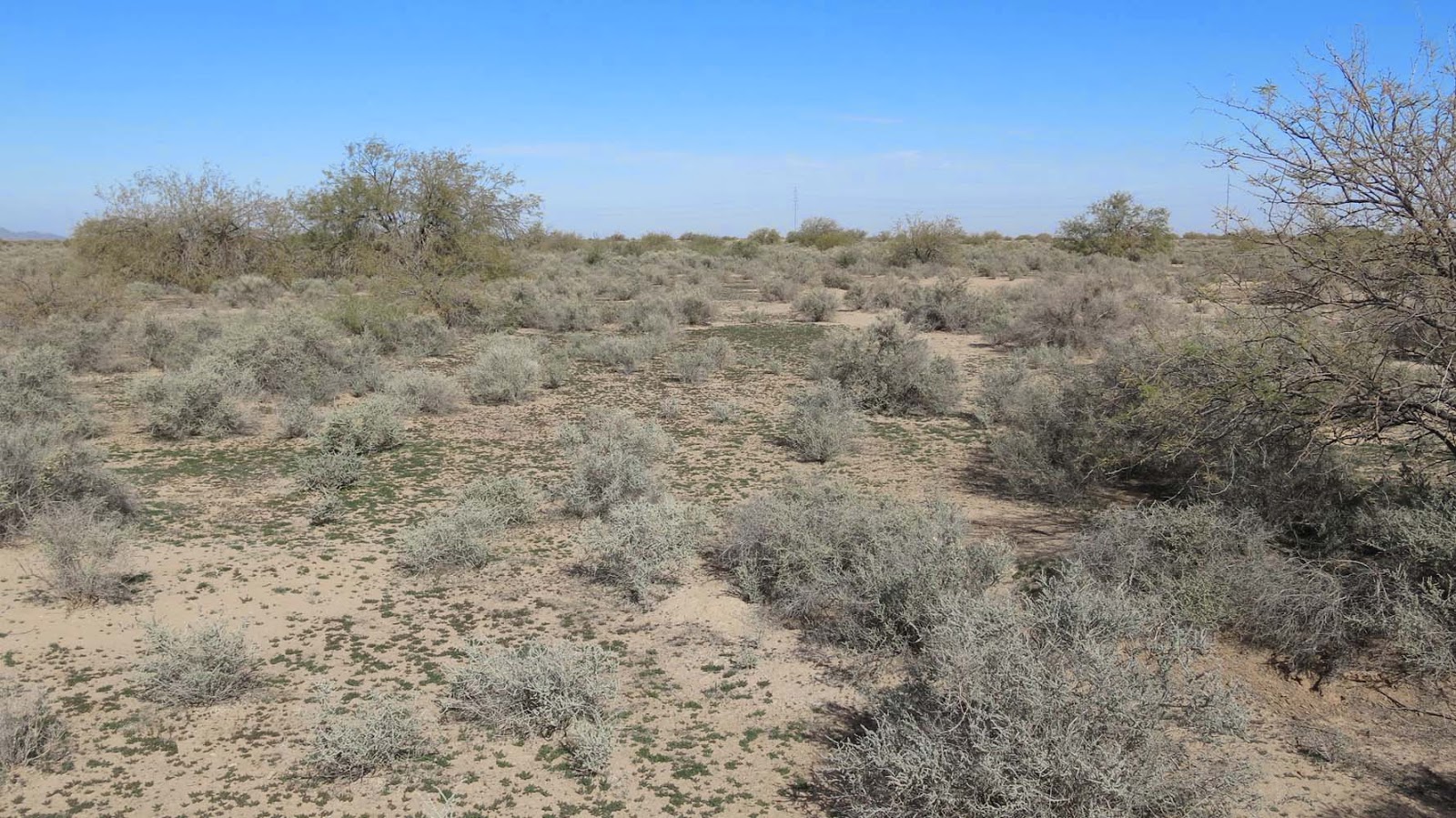 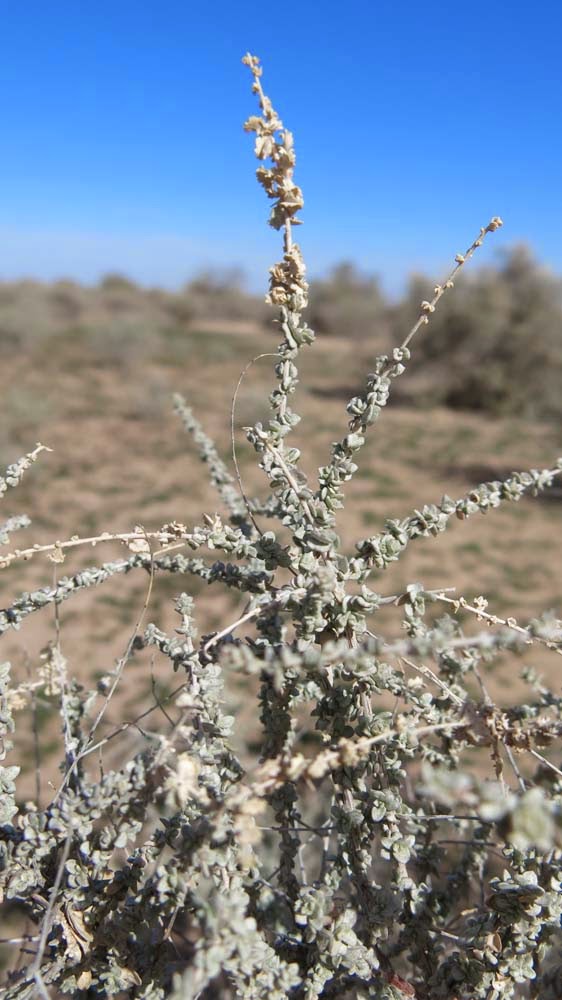 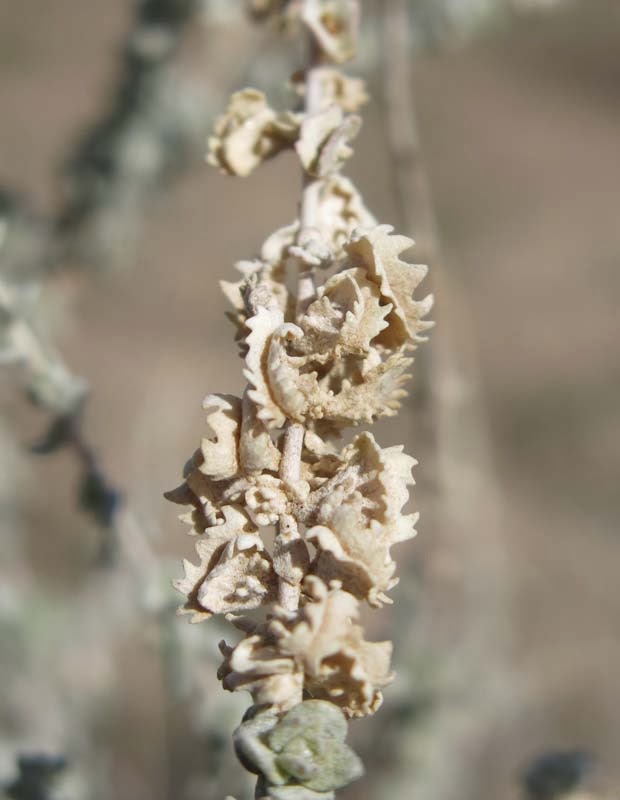 Thanks to the long, soaking rains we had in late November and early December, the Fremont's Wolfberry, Lycium fremontii, is in full bloom. A Costa's Hummingbird staked out one as his territory. 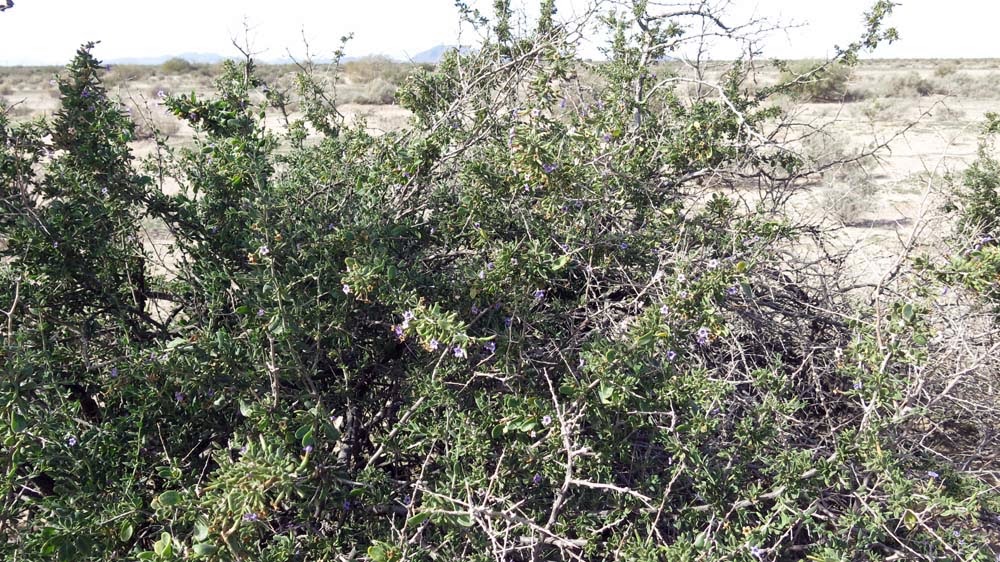 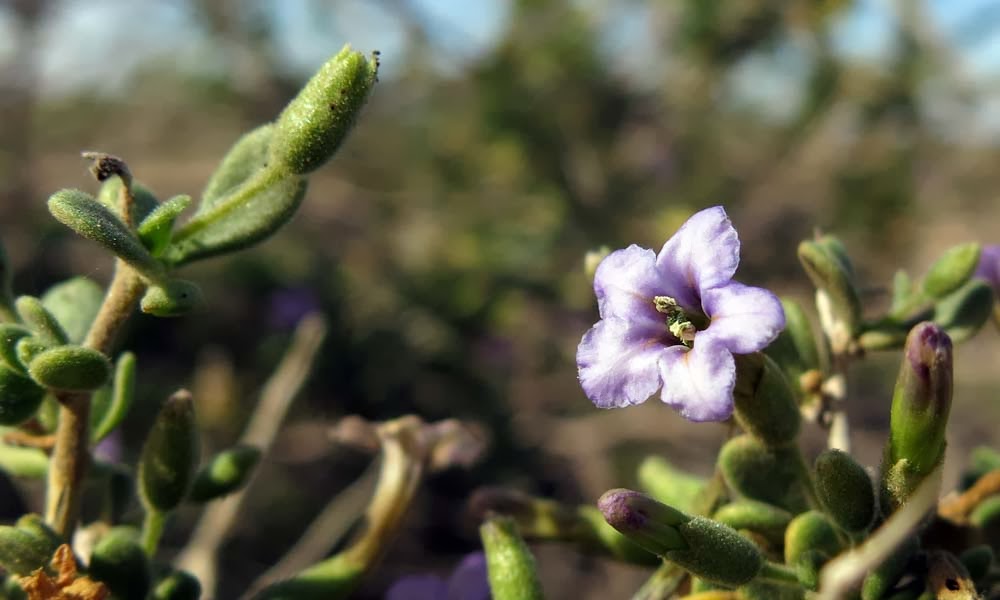 With pale malar streaks and obviously streaky backs, most if not all of the sparrows we saw were probably Sagebrush Sparrows, though I can't swear we didn't see some canescens Bell's Sparrows. More study needed. 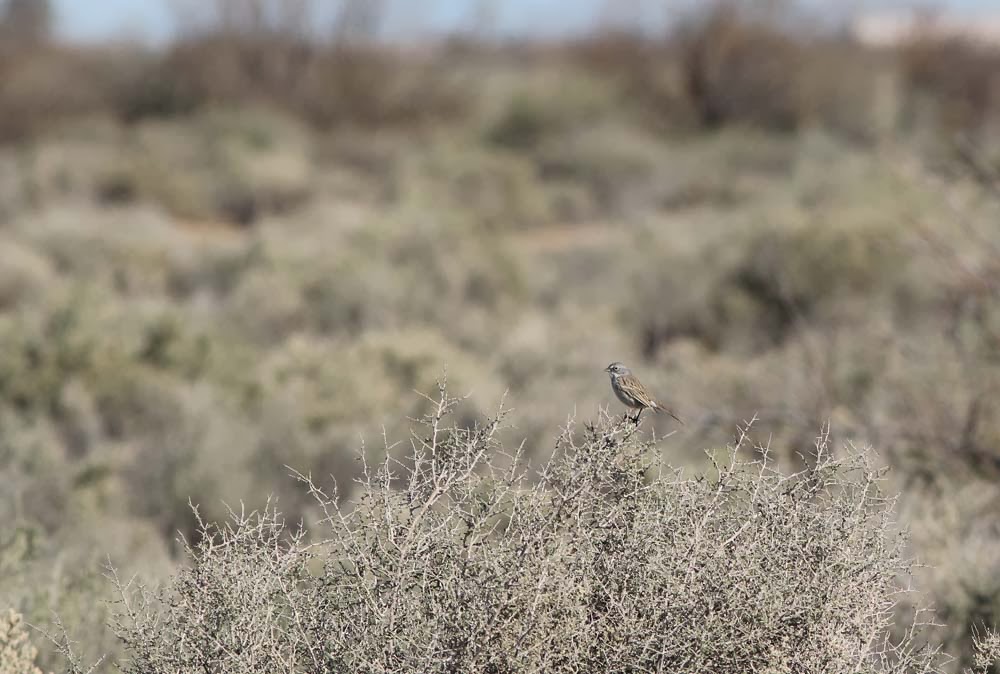 Posted by Birdernaturalist at 12:02 PM