This morning we returned to Sumidero Canyon National Park, this time heading straight to the highest elevations for dawn bird activity. We had great experiences with a coralbean (Erythrina) tree full of Streak-backed, Black-vented and Altamira Orioles, as well as a Wild Ackee tree (Cupania americana) providing fruit for Masked Tityra and Blue-and-white Mockingbird.

The view of the canyon here is amazing. 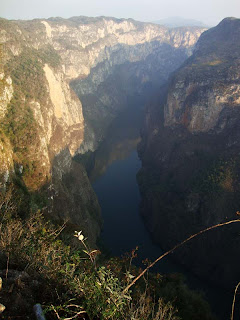 One of the more distinctive plants in this woodland is the bottle-palm or ponytail-palm Beaucarnea goldmanii. Sometimes placed in the genus Nolina, its family assignment is even more confusing. Depending on the authority, it is in Liliaceae, Agavaceae, Ruscaceae, Nolinaceae, or Asparagaceae. Take your pick. 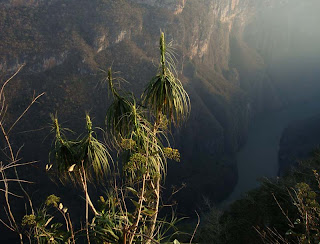 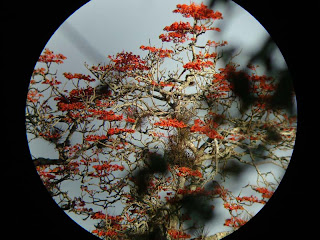 Closer inspection of roadside flowers resulted in this leafless orchid, Aulosepalum hemichreum (thanks to Gerardo Salazar for the name). 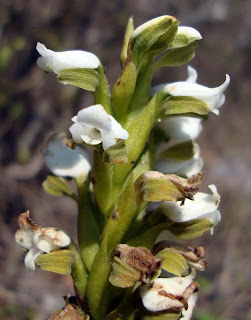 Also a great find was this deciduous bromeliad with pink flowers. The new green leaf clusters are just emerging. [Update on Aug 1, 2016: my photo on Flicker was finally identified for me this past week as Pitcairnia heterophylla by Dr. Carlos Rommel Beutelspacher.] 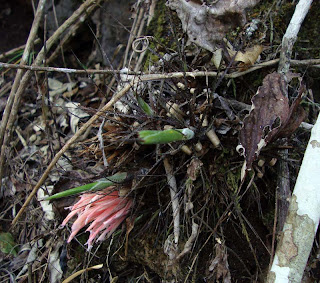 This dragonfly is Red Saddlebags, Tramea onusta, seemingly out of place in the dry forest. 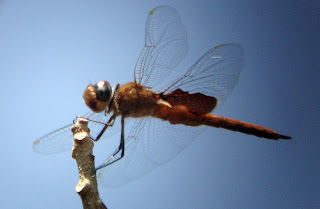 In the afternoon we drove just 45 minutes to the NW of Tuxtla Gutierrez and found ourselves in a subtropical wet forest in a limestone karst region. Plant diversity was amazing here, with ferns, begonias, palms, and many trees.

I haven't yet figured out what this blooming tree is.
[Update on Aug 1, 2016: I just found out from botanist Marcos Escobar that I took this photo more than four years before this species was even described! It was named Mortoniodendron ocotense in December 2014 and is endemic to this very region of limestone. It is in the relatively recently expanded family Malvaceae, in the subfamily Tilioideae, the same as the famous linden or Basswood.] 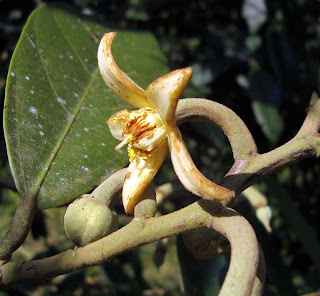 Here are Eve and Rob Gill underneath the same tree. 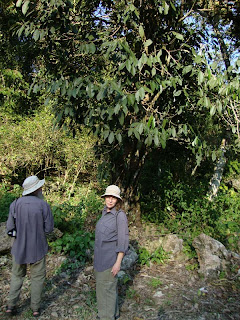 This orchid, Maxillaria elatior, was blooming in the crotch of a tree some 50 feet high (thanks to Gerardo Salazar for the ID of this one too). 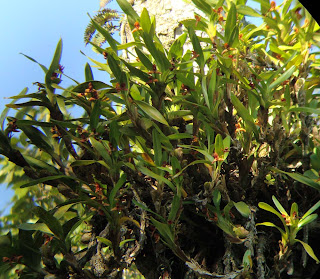 One of the main birds we were looking for here was the extremely local Nava's Wren. It's often very shy, not venturing far from the rocky limestone in the forest understory. This one got quite bold and perched on a roadside rock for all to see. 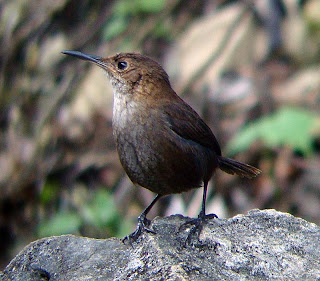 Posted by Birdernaturalist at 4:09 AM