March 20, 2010
This was a more relaxed morning spent in the drier eastern part of the valley of Oaxaca near and in the ruins of Yagul.

There are several kinds of columnar cacti and giant prickly pears that dominate the habitat. We saw many Boucard's Wrens and Curve-billed Thrashers, several Beautiful Hummingbirds (including one male), Virginia's Warblers still on their winter grounds, and a Lesser Roadrunner singing on a rock while carrying a lizard it its bill.

This is a view from the back side of the ruins to the northwest. 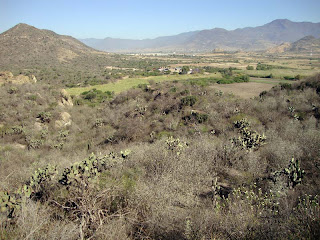 On the way back to our hotel for lunch we made the traditional stop at the giant, 2000-year-old Montezuma Baldcypress in the town of Santa Maria del Tule. 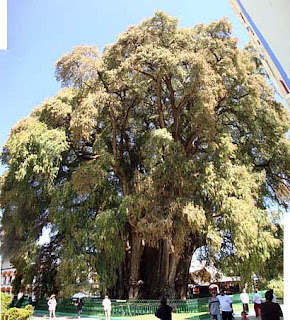 A stomach flu-like bug has been moving through some of the group, slowly hitting one person after the other, but each in a different way. After a siesta at the hotel, those of us still feeling well took a picnic dinner back up to Cerro San Felipe, first seeing some nice birds such as Mexican Chickadee, Red Warbler, and another Dwarf Jay. 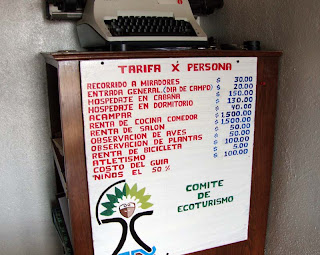 The land here is owned by the community of Santa Catarina Ixtepeji, and they started unofficially charging entrance to the roads about 13 years ago. Now it's all official, and birding at Cerro San Felipe is one of the more expensive activities. On person suggested we could save a lot of money if our driver dropped us off at the highway and we jogged in.

As dusk approached, multiple Mexican Whip-poor-wills began calling, and at least two groups of distant Long-tailed Partridges chorused. Then I began whistling and playing tape for the several species of owls that are possible here. For the first hour we walked and drove up the road, stopping to troll for Flammulated, Whiskered Screech, Northern Saw-whet, Stygian, and Barred Owls to no effect.

Finally, a shape flew in over our heads and landed in plain sight in response to my whim to play Fulvous Owl, a species known only from south of the Isthmus of Tehuantepec. It's a horrible photo, but we had amazing views. It also called and sounded much like Jesse Fagan's Fulvous Owl recording from Guatemala. It looks like we'll have to publish something on this find, once we know what's going on with the genus Strix here and in other parts of Mexico. 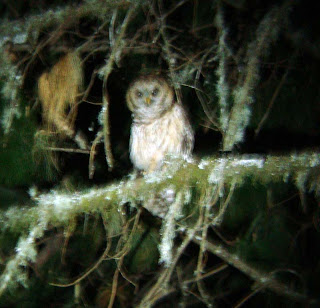 Posted by Birdernaturalist at 10:56 PM