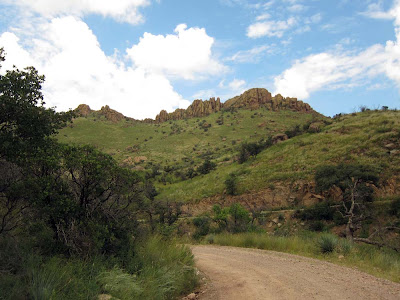 This past week I went bugging with my friend Margarethe Brummermann to the Atascosa Highlands of SE Arizona, about a couple hours south of Tucson. This area is famous among biologists for harboring an amazing diversity of plants and animals, especially those with tropical affinities, barely entering the US here. Birders know it as Five-striped Sparrow country, and it has one of the most fabulous Christmas Bird Count circles in the country. It's also extraordinarily beautiful country.

Margarethe and I pottered along here and there, stopping to photograph and identify any beetle, spider, moth, bee, wasp, butterfly, grasshopper, or whatever we happened upon. I happened upon this caterpillar, hidden in a folded-over leaf on a Coral-bean, Erythrina flabelliformis. 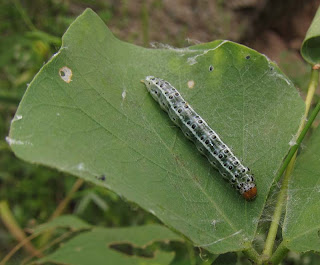 I thought it would be possible to ID with some clever internet searching, and sure enough I found it at home the next day. First I went to Bruce Walsh's website, which has a nearly complete list of Arizona's moths, lists many of the known food plants, and even has photographs of many of the caterpillars. So first I searched the website for "Erythrina," and came up empty.

So then I went to Bug Guide and searched there. There were a few hits for that word, but one that jumped out at me was a moth called "Erythrina Borer, Terastia meticulosalis." With no photos of caterpillars there, it was back to Bruce's website. Erythrina Borer did not have any larval photos there, rats, but the next species listed did...and that was it: The Erythrina Leafroller, Agathodes designalis! Then I discovered why my first text search did not pan out – a simple typographical error:

Later in the evening, as it would turn out, at Margarethe's bug sheet (we stayed until about 10:00 p.m., her small gas generator powering a mercury-vapor lamp and an ultra violet bulb), we had adults of both of these moths in the family Crambidae. 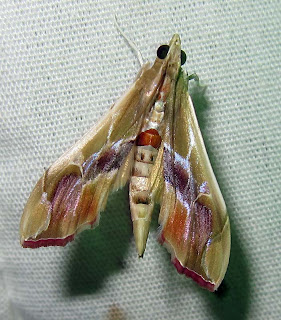 The Bug Sheet, at which we identified over 50 species of moths. 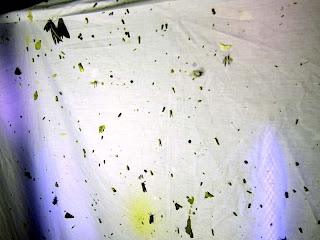 We had a couple other interesting moth caterpillar finds this day. One was Apatalodes pudefacta, a moth looking a bit like a small sphinx moth, which I've seen as adults only in the tropics. And we found a target species: an apparently unknown species of Datana moth (family Notodontidae), the caterpillars of which feed on Point-leafed Manzanita (Arctostaphylos pungens). They were actually quite common, and Margarethe shipped them off to a contact who will be rearing them to determine the species. 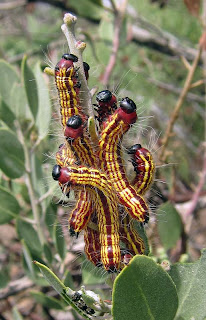 They look very similar to the caterpillars of Datana perspicua (adults at Bug Guide here), which I found feeding on Fragrant Sumac (Rhus aromatica) just a couple weeks ago. 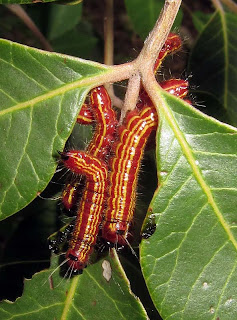 The caterpillars that Margarethe shipped off to David Wagner in Connecticut were received along with plenty of food plant, but then David discovered another caterpillar on the leaves that we had totally overlooked. What a bummer that I missed it – Limacodid caterpillars are so cool!


There are many other moth caterpillar mysteries. This one still remains unidentified to species, though Bruce Walsh was able to tell me that it is in the genus Cucullia. I photographed it in Montosa Canyon four years ago. Update on 1/25/16: This is a Eulithosia sp., in the same family as Cucullia. At about the same time I wrote this blog, Jennifer Bundy collected this same species of caterpillar feeding on the same plant (Porophyllum ruderale) and posted her find with this name on the website http://southwestmoths.org/Eulithosia_sp.html. Then two years after that, John and Jane Balaban at Bugguide.net found my old photo there and updated the name. I got an automatic email notification from Bugguide, and quickly updated my on Photos library as well as my uploaded photos to Flickr, but this one remained incorrectly labeled until now, when I was reminded by a thoughtful comment. The species is still unknown, it seems. 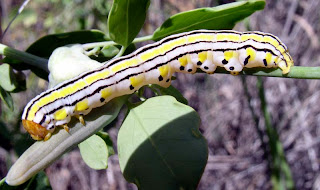 Such a pretty caterpillar, yet the adults of this genus (the Hooded-Owlets) are all rather drab and nearly impossible to identify. This one was on my screen door the other day. It could very well be the adult of the above caterpillar. Who knows? 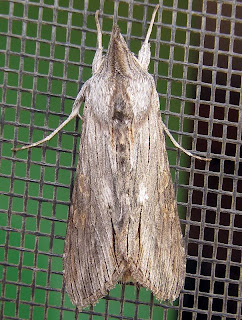