Taking a break from natural history, here's proof that I do more than just birds, bugs, and flowers. Over the course of three days last week I made 35 pounds of bread dough (divided into 75 balls and placed in zip-loc bags), grated 10 pounds of mozzarella cheese, made 4 gallons of pizza sauce (two recipes), and lugged 34 bottles (about 90 pounds) of wine in my backpack, transported from the stores by bicycle.

Here's a row of pizzas waiting to go in the kitchen oven. There was another queue outside waiting for their turn in the gas grill. 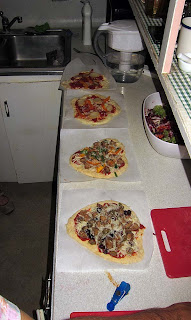 We compared six wines to find which goes best with pizza, building on last year's results – two malbecs, two cabernet sauvignons, and two syrahs. (Interestingly, one syrah from Washington was labelled as shiraz, supposedly an Australian name for the same grape.)

The most exciting result is that the cheapest wine – the Wine Cube malbec from Target – got the highest rating, averaged from the scores from 18-20 tasters. But to disguise the fact that it was a boxed wine, I had to decant it into empty wine bottles, and that may have aerated it, thereby giving it more flavor. I had covered the labels of all bottles, so it was more-or-less a blind tasting. 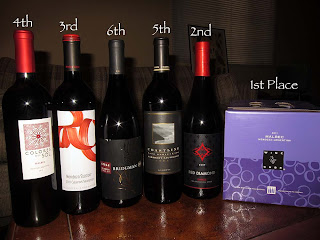 After all was done, I was left with about 2 quarts of pizza sauce, a bunch of mozzarella, 13 bottles of wine, and 13 balls of pizza dough (the latter in the freezer, where they should last for a few months).
Posted by Birdernaturalist at 7:53 AM