From the Field Costa Rica 1

A quick report from my ongoing tour of Costa Rica: We arrived at Monteverde this evening for a two-night stay, meaning our 13 days of birding in Costa Rica were half over at noon today. We've already had almost too many amazing bird and wildlife encounters to remember, but we're snapping lots of photos to keep track. At Cerro de la Muerte we briefly disturbed three Spotted Wood-Quail next to the trail, but then they settled down almost right away for a preening session right next to the trail. Rarely are these birds so confiding. 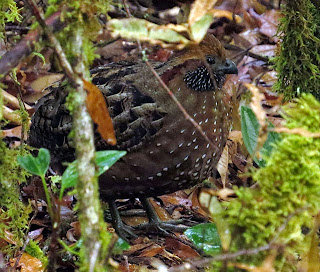 Then we discovered some great things in the far southwest at Bosque del Rio Tigre. While we were watching a Squirrel Cuckoo gathering caterpillars over the road, one of the group noticed something large moving in the grass on the roadside. Out from there emerged this Brown-throated Three-toed Sloth, slowly crossing the road right in front of us. 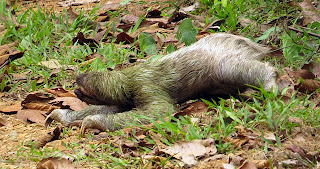 Most of the group took a short hike up a forested stream bed to see this most gorgeous little Gulfo Dulce Poison Dart Frog. 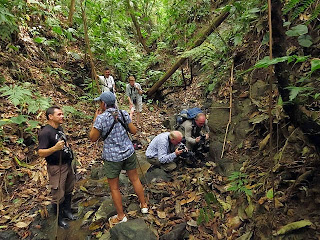 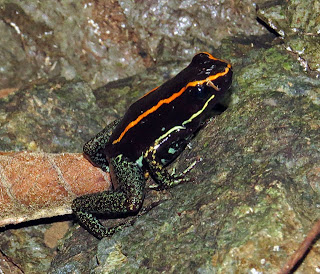 Near the town we found this Gray-lined Hawk, only recently split from the northern Gray Hawk, and this was also a first for me in Costa Rica. 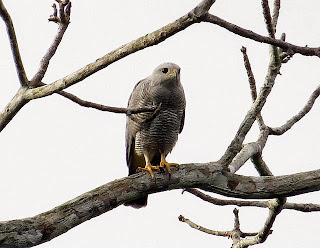 Today we birded Carara National Park for a bit, where one of the most memorable sightings was a pair of Red-legged Honeycreepers feeding on the bright red arils of the open fruits of huevos de caballo, a member of the dogbane genus Tabernaemontana. 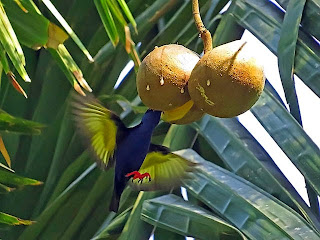 And after lunch at Ensenada Lodge we spotted some good mangrove specialties (Northern Scrub-Flycatcher, Mangrove Vireo, and Mangrove Warbler), but a highlight for everyone was this roosting Pacific Screech-Owl with two fledged young perched right above it. 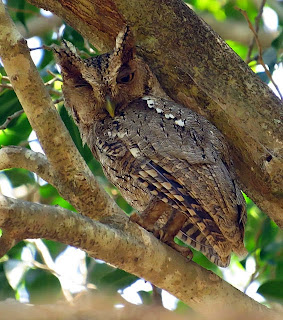 Posted by Birdernaturalist at 10:49 AM