A Morning Hike in Pima Canyon

This past Thursday, Jake Mohlmann and I made a quick early morning hike into Pima Canyon, partly for the exercise, partly with the hope of finding some good birds, and knowing that there’s always cool critters and stunning scenery.

We started hiking at about 6:15 am, when most of the canyon, draining toward the SW, is still in the shade. This is a view from near the start of the trail looking south over Tucson and at the Santa Rita Mountains in the distance. 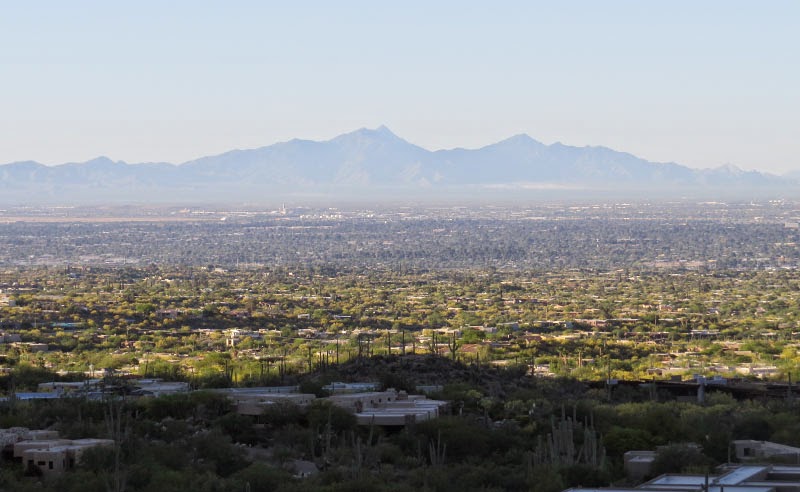 Along the first part of the trail were dozens of these Lateral Seed Bugs, Melacoryphus lateralis. 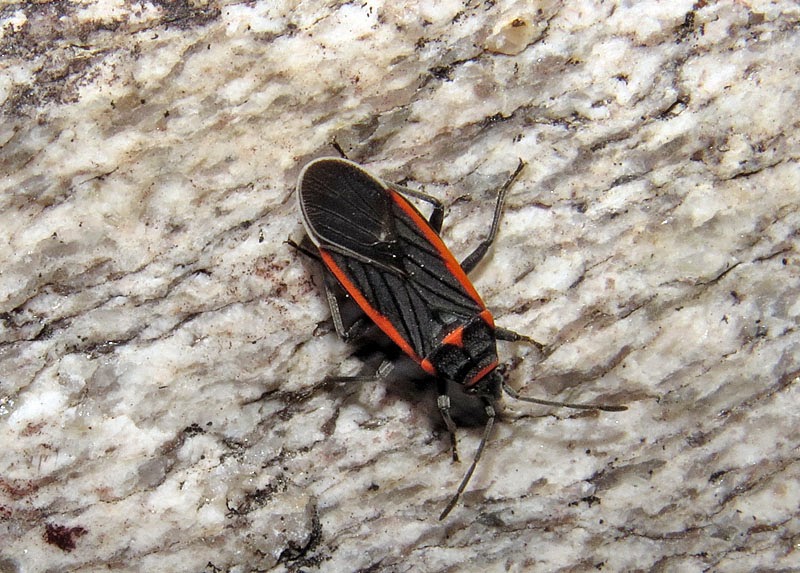 And shortly after that was this Giant Cactus Longhorn, Moneilema gigas. 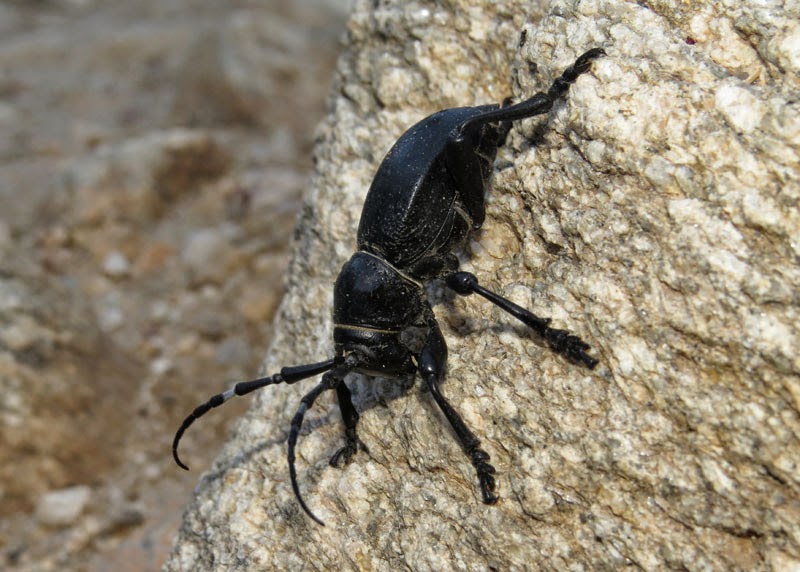 A little while later we found another doing what this odd, huge, flightless cerambycid does – eat cactus. 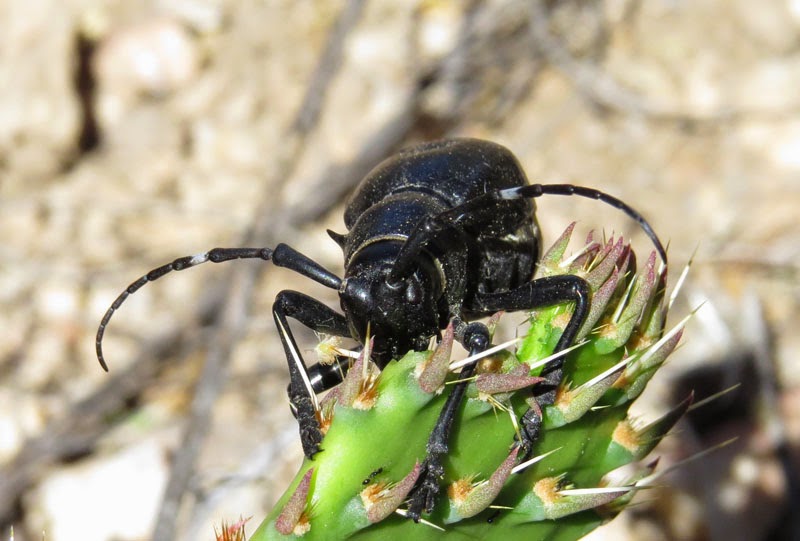 The sun rose quickly to enter the upper parts of the canyon. This is Jake next to a Saguaro, Carnegiea gigantea. 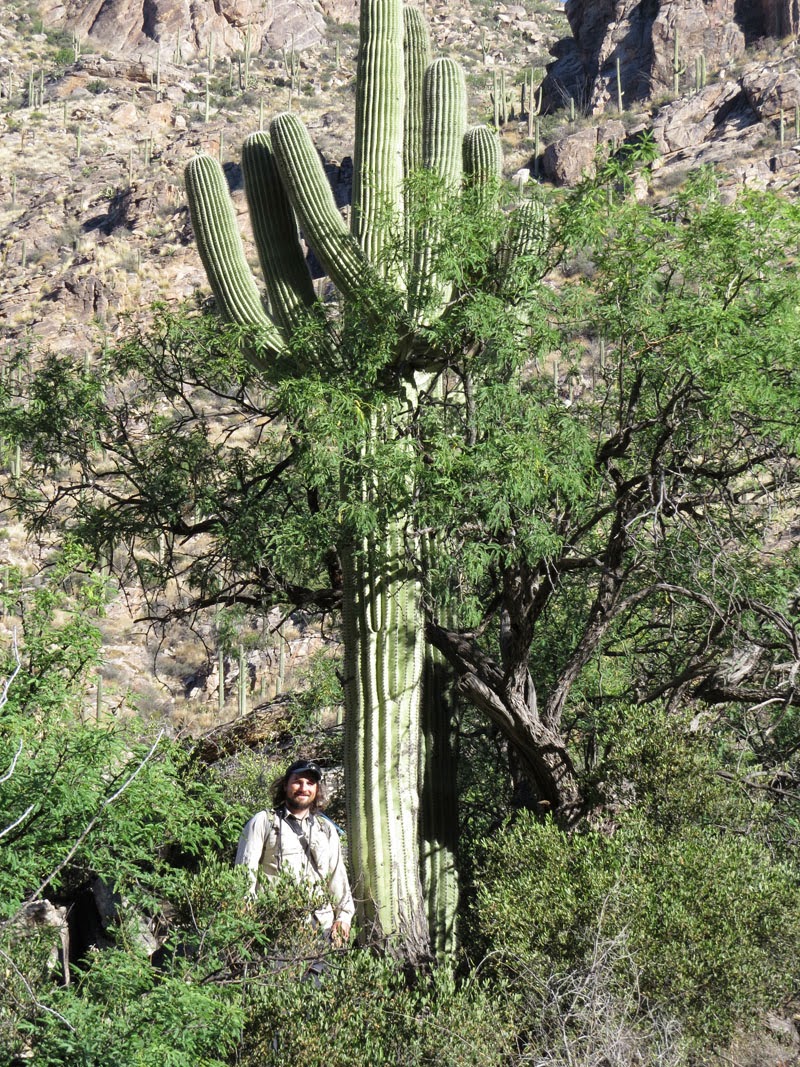 Large stretches of the trail were wonderfully perfumed by the abundant blooms of the Catclaw Acacia, Senegalia wrightii. 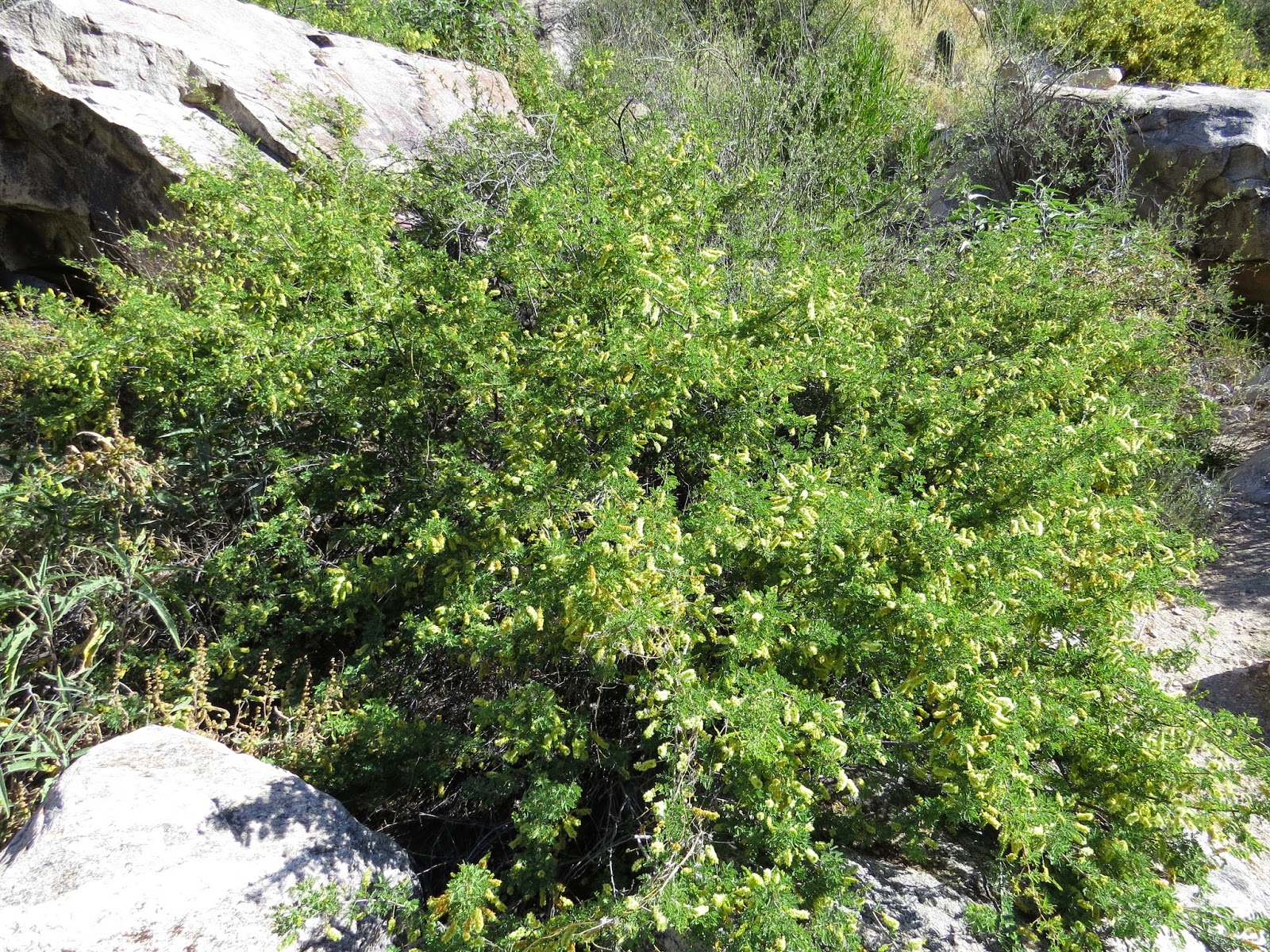 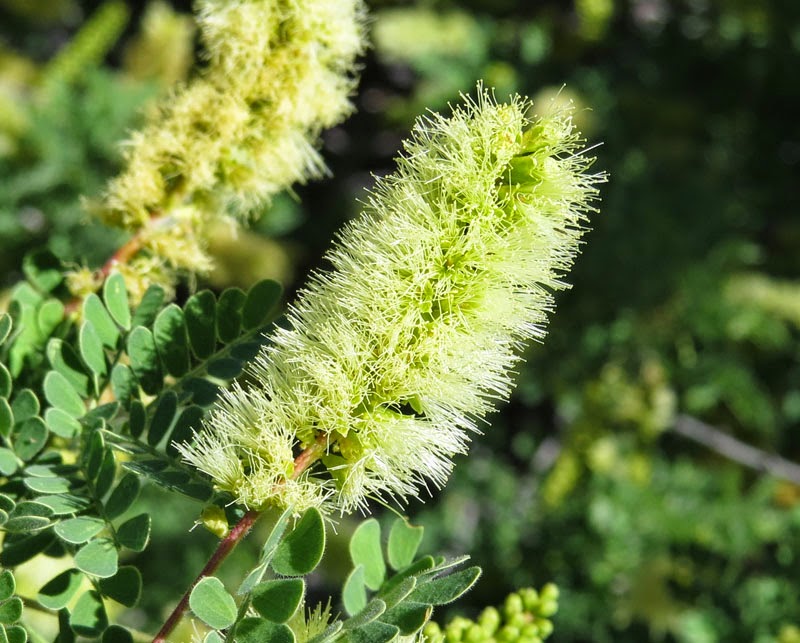 There were lots of bees, flies, wasps and other insects attracted to these flowers. This syrphid fly is probably Mexican Cactus Fly, Copestylum mexicanum. 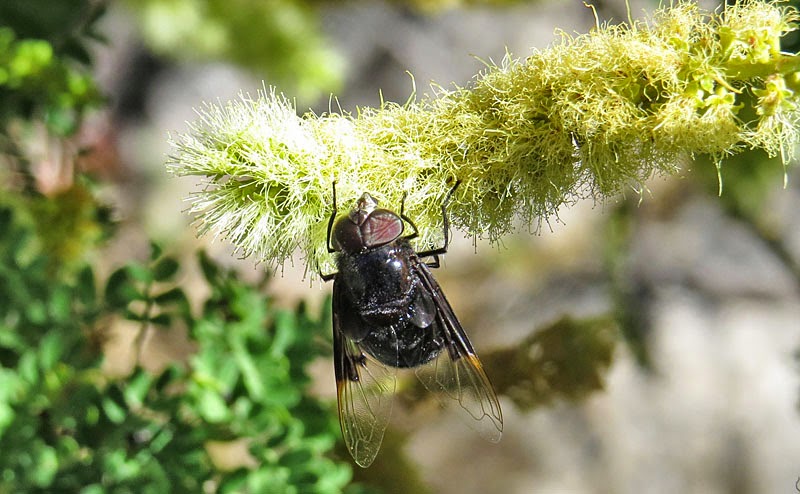 One could spend weeks botanizing here. I took time to key out just two pink composites, both new for me. The first was Acourtia wrightii, Brownfoot or Wright's Desertpeony, which I recognized from its close relative Acourtia thurberi, common south of here. It has a very unusual flower structure similar to Trixis, in that instead of having one-petaled ray flowers, five-petaled disk flowers, or a combination of the two, each flower has two petals on opposite sides – one with three minute teeth and one with two minute teeth. It hints at the evolutionary origin of ray flowers, each tooth being the end result of what once was a single petal of a regular tubular flower. 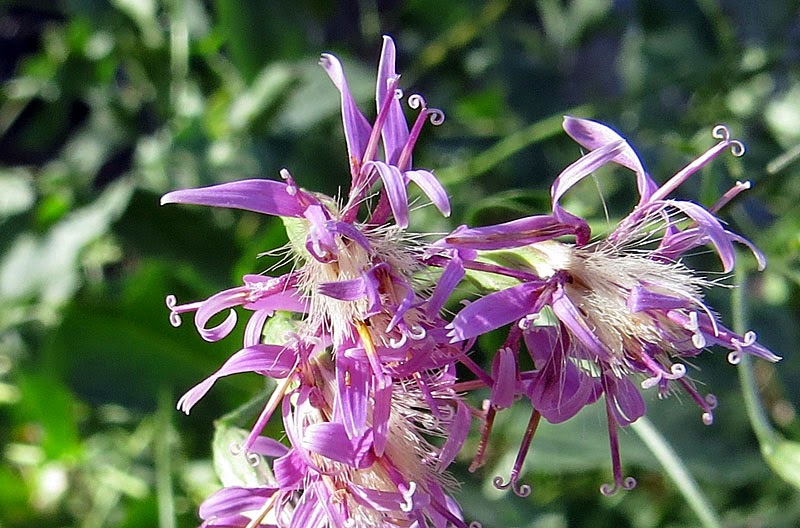 This one is Stephanomeria tenuifolia, Narrowleaf Wirelettuce. Like all members of the chicory tribe (like true lettuce and dandelions), the entire head is composed of five-toothed ray flowers. 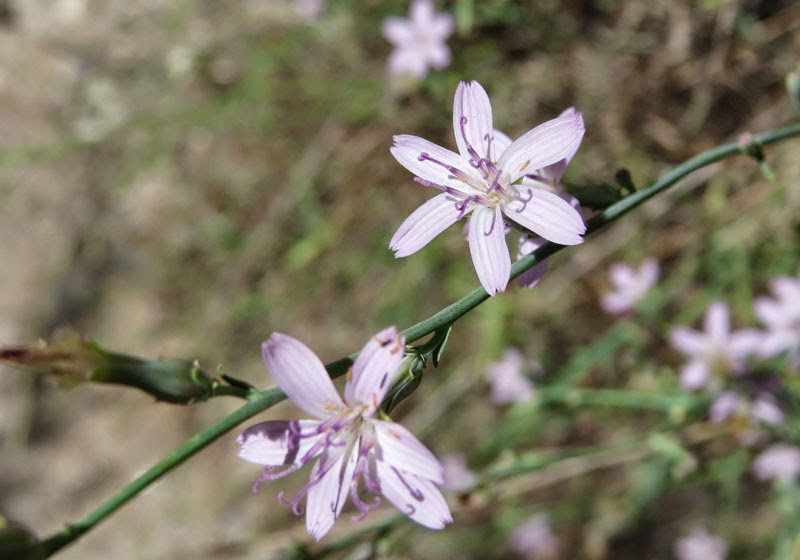 While enjoying the wirelettuce, I noticed that an unusual skipper landed on it, and I quickly snapped a photo before it took off. It was a Cestus Skipper, Atrytonopsis cestus, which I had only seen once before in Brown Canyon near the Mexico border. It’s very scarce anywhere in the U.S. but is known from the Santa Catalina foothill canyons like this one where the host plant occurs, the grass Bamboo Muhly, Muhlenbergia dumosa. We didn’t see any of the grass, but there must be a clump or two somewhere in the canyon. 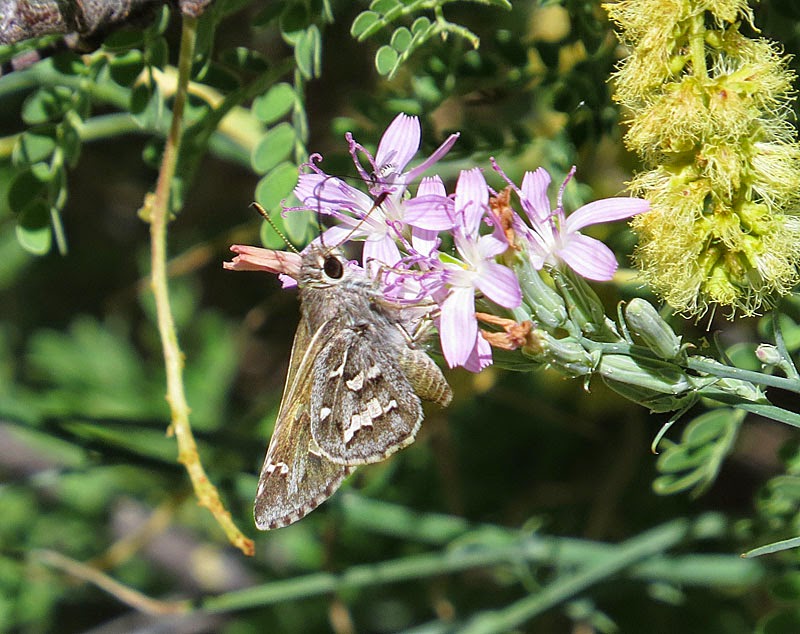 There were lots of butterflies everywhere, but we stopped to photograph just this one Mexican (or Sonoran) Metalmark, Apodemia mejicana. 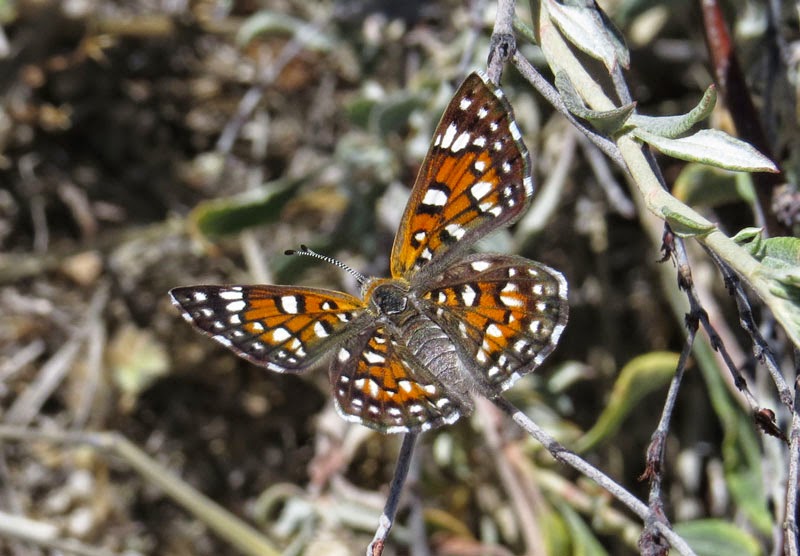 We stopped by a wet part of the stream where there were several caterpillars belonging to Common Buckeye, Junonia coenia, feeding on the monkeyflower. 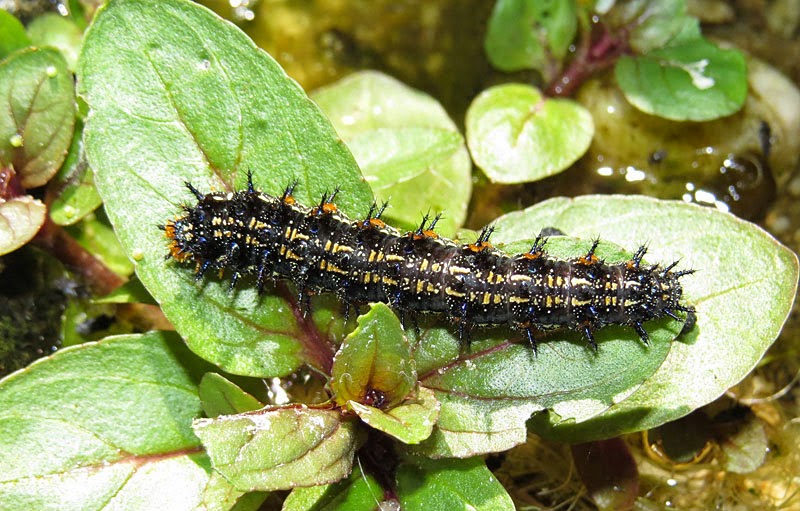 At the same spot I photographed some lovely damselflies, which, upon inspection of the photos, turn out to be Spine-tipped Dancers, Argia extranea. In this photo you can actually make out the tiny projection on the lower appendages at the end of the abdomen that give it the name.

We made it as far as the lower dam at nearly 3 ½ miles, a spot with permanent water, also well known amongst birders as having the northernmost record of Rufous-capped Warbler. 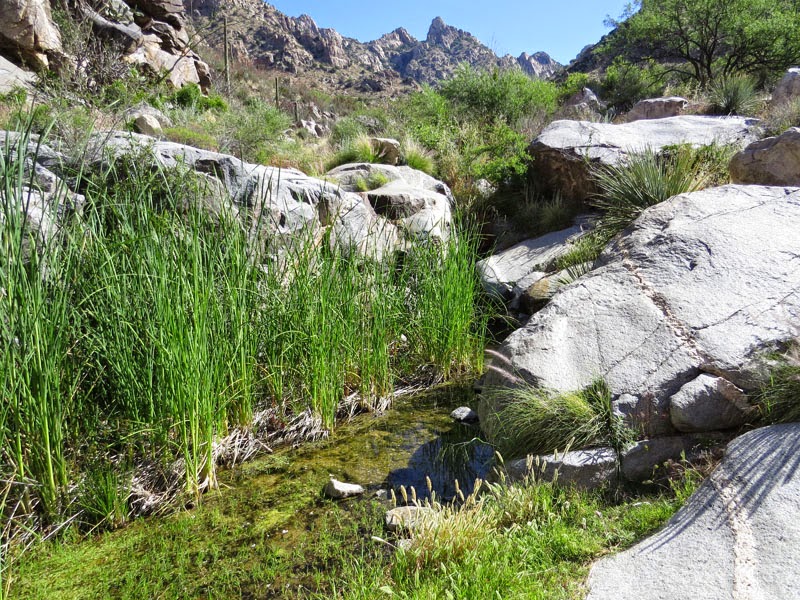 There was lots of bird activity around, and we dallied here for some 15 minutes. This juvenile Anna’s Hummingbird came to bathe on the face of the dam.

Jake called out a very distant Turkey Vulture…or Zone-tailed Hawk, he admitted. It was too far to see for certain, even with our top-of-the-line Zeiss binoculars. 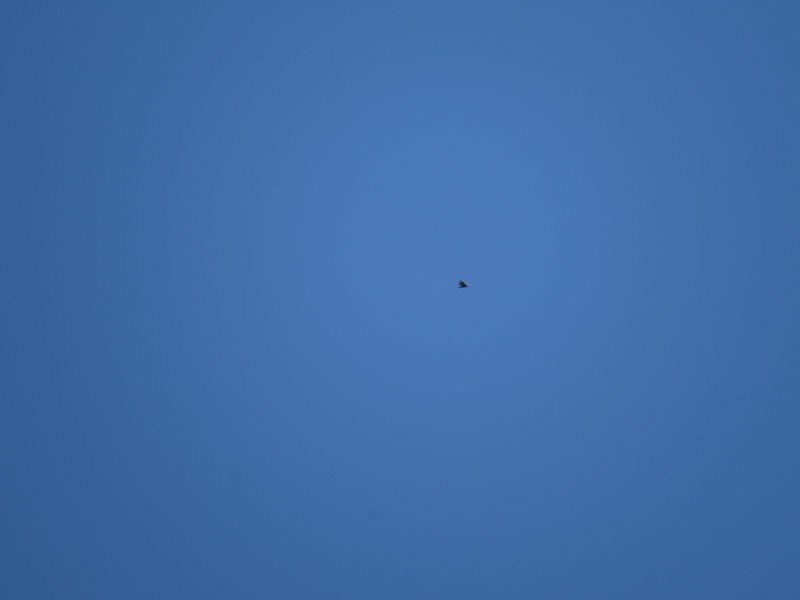 But I snapped a photo with my Canon PowerShot SX50 HD, zoomed in, and I could see that it was indeed a Zone-tailed Hawk. 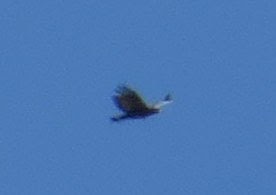 This canyon has a known territory of Golden Eagles which when seen on the Tucson Valley Christmas Bird Count are the only ones. Sometimes they are missed. But looking upstream from the dam, I spotted one flying high across the canyon, and soon we were watching two Golden Eagles soaring and doing a roller coaster display flight to broadcast the occupation of their territory to anyone watching. 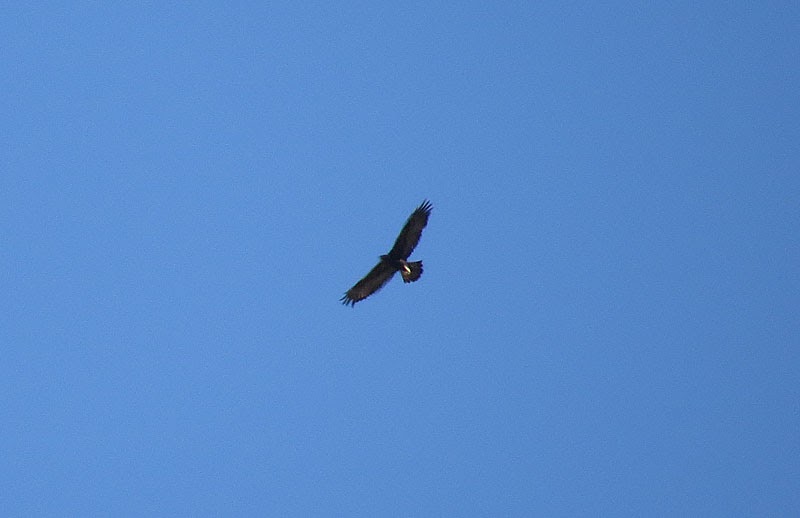 Jake, with his trained eyes, started scanning the cliffs up the canyon and spotted the nest with a juvenile, no less. 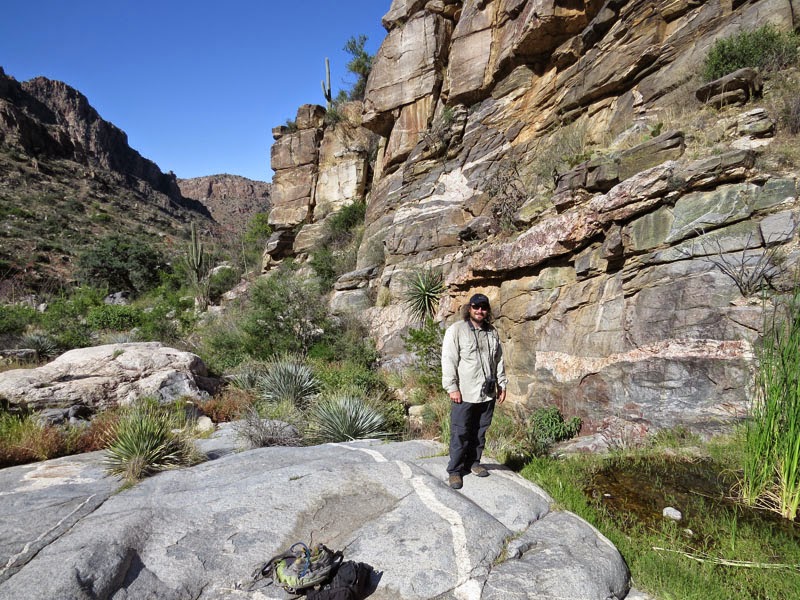 We saw and heard a total of 53 species, amongst which were several migrants. Lazuli Buntings were often in pairs, and the males singing, but they aren’t known to breed here so must have been passing through. There were plenty of lizards around, and this Clark's Spiny Lizard, Sceloporus clarkii, was particularly photogenic. 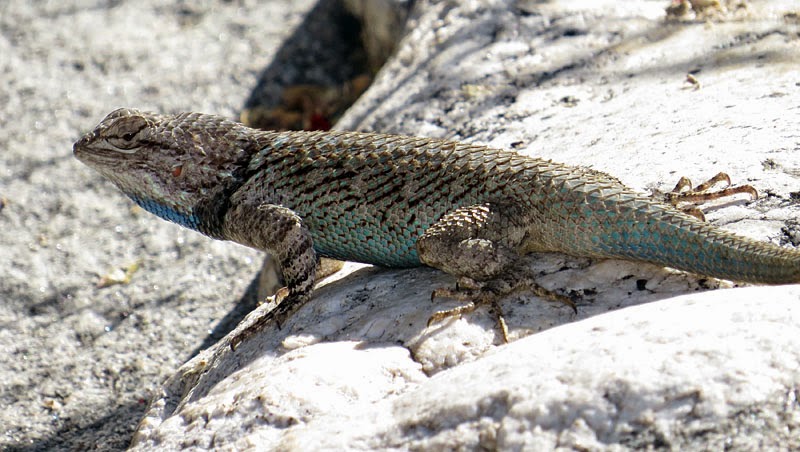 We’re past the prime prickly pear blooming season, but there were still a few on what I think is Tulip Pricklypear, Opuntia phaeacantha. 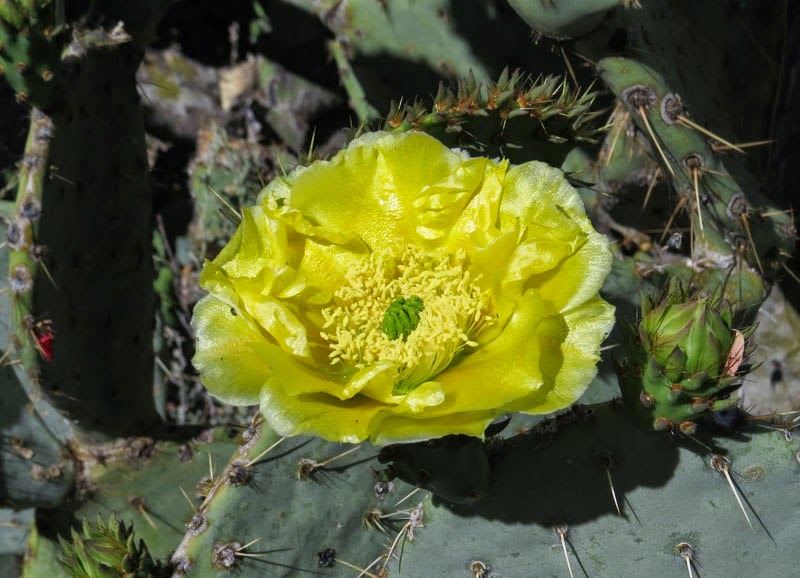 This one had a pollinator in the form of a beetle in the family Cleridae ­­­­­­­– Ornate Checkered Beetle, Trichodes ornatus. 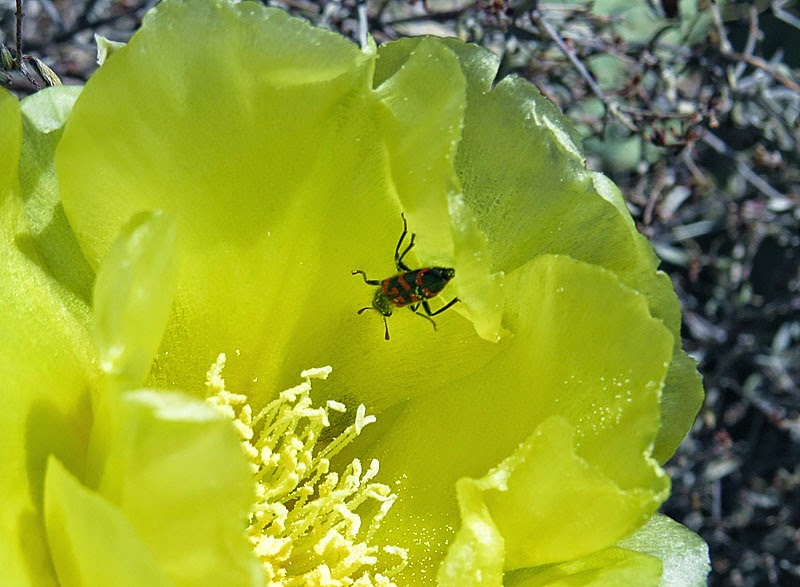 With views like this, it’s no wonder that this is such a popular hiking destination for Tucsonans. We came across 12 hikers, all in pairs, on this weekday morning. 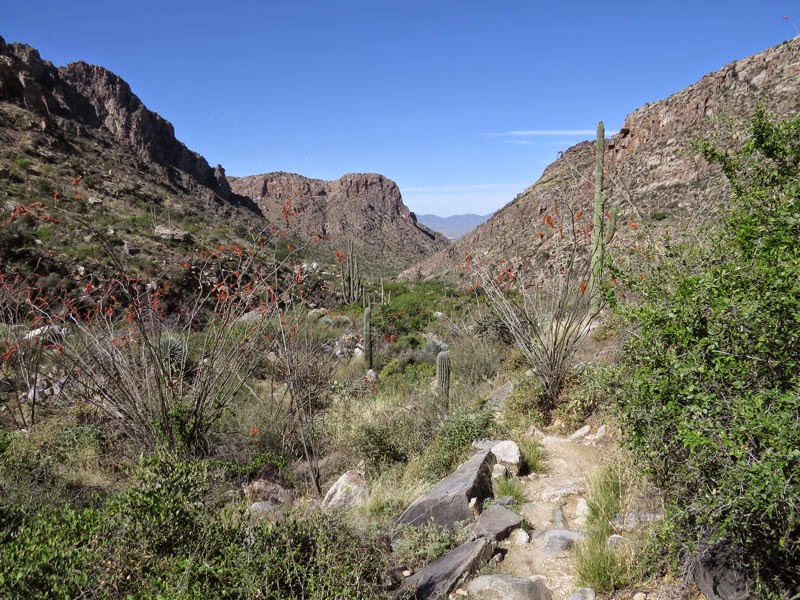 Near the end of our hike I noticed the first bloom on a Saguaro, the state flower. It’s said to be fragrant, but I haven’t had an opportunity to smell one yet. 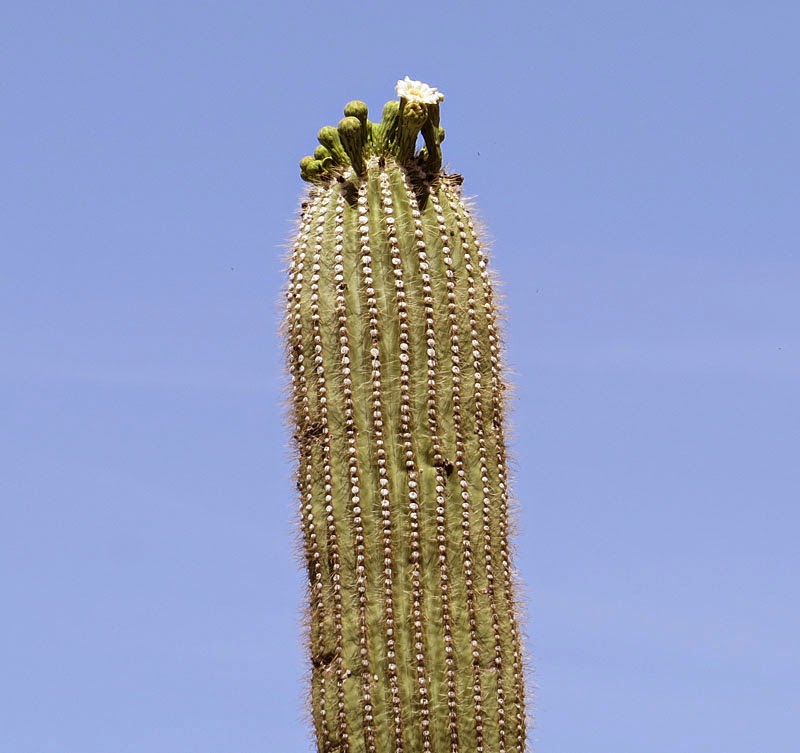 Posted by Birdernaturalist at 4:48 PM