A Second Day at Southwest Wings and More Owling

Just a few photos from today’s long day of field trips for the SW Wings Birding Festival. We started with good views of a Botteri’s Sparrow in the lower elevations then saw the male Elegant Trogon in Ramsey Canyon, where it is a rare bird. We walked up the canyon where we saw a lot of the regular madrean pine-oak specialties such as Greater Pewee, Hepatic Tanager, Grace’s Warbler, and several Painted Redstarts. 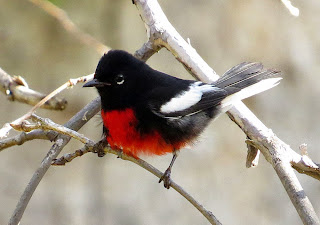 We then worked up to Carr Canyon where we added all the sought-after warblers, such as Virginia’s, Red-faced, and Olive (finally). A highlight was a flock of Red Crossbills, which had at least two different types. This one appears to be Type 6, the largest and largest-billed of all the types, which are all probably good species. 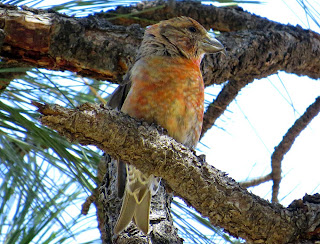 We ended the day’s birding with 74 species. I then led a second owling field trip which was a great success. Back up the Carr Canyon Road we re-found the same owls I had found on Wednesday, including this Elf Owl sticking its head out of the nest cavity. 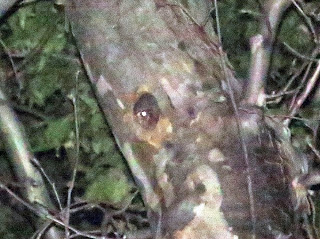 This time I got a photo of one of the very responsive Whiskered Screech-Owls. Notice the little feet and green bill. 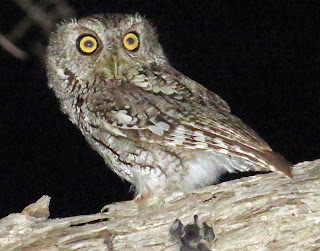 And this is the same Western Screech-Owl as the other night. Notice the big feet and black bill. Of course, they also sound very different. 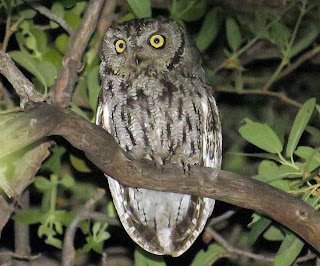 We had these three species of owls in just about 20 minutes, so we went a bit farther up the road and tried for Common Poorwill. It seemed that we weren’t going to even hear one for a while, but then one flew right overhead, popping its wings in defense of its territory as I played its song. Then I spotted its eye shine in my headlamp on a dirt bank above the road. 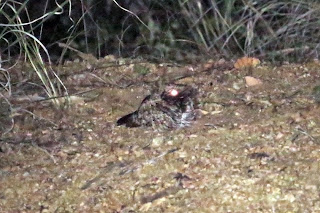 I played a little bit of Mexican Whip-poor-will, and then to just demonstrate how different it is from Eastern, I played that too, as well as the Mexican's closer relative, the Dusky Nightjar from Costa Rica. Then a Mexican Whip-poor-will began singing it’s “will-poor-whip” song just up the road, and within five minutes it was flying over our heads. To wrap it up, we drove a few miles down to Casa de San Pedro and finished out night with a ghostly Barn Owl also flying overhead. Not a bad night.
Posted by Birdernaturalist at 11:55 PM