Much Ado About Nutting

This past Wednesday I had the opportunity camp for a night and go birding and botanizing with some friends of a friend. Nina, Galen, and Amelia are past or present students at Whitman College, and this was their last week of enjoying the out-of-doors on their winter break. I chose to take us to the lowest reaches of California Gulch on the Mexican border to look for the Nutting’s Flycatcher found on the Atascosa Highlands CBC by my friends Dave Stejskal and Thomas Staudt. Amelia chose to hang back in Tucson to work on her undergraduate thesis, so it was just Nina, Galen, and I. 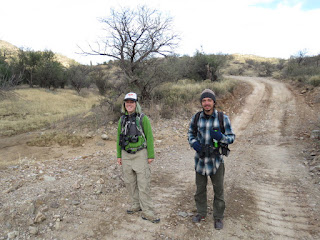 We arrived at one of my favorite camping spots at the confluence of California Gulch and Warsaw Canyon, where two years ago I heard a Buff-collared Nightjar on the early date of March 31. This time we heard just Western Screech-Owl, Great Horned Owl, and Coyotes. In the morning we began birding our way downstream about 1/2 mile to where the Nutting’s Flycatcher had been seen. 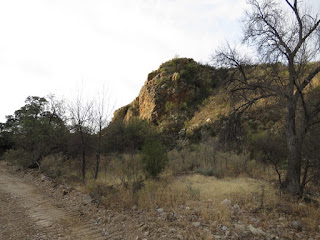 We didn’t find it right away, in fact an Ash-throated Flycatcher was at the exact spot when we arrived. We took this opportunity to study the features on the Ash-throat that would be different if we were to find the Nutting’s – the color of the belly, the pattern of rufous vs. fuscous visible on the underside of the tail (on the outer tail feathers), the edging on the primaries and secondaries, and the color and shape of the crown and its contrast with the face. The Ash-throat was calling too, which is the easiest way to tell them apart. But we didn’t stand around just waiting, knowing that the bird had been seen quite a ways downstream in the past days. We also preferred to explore, making it as far as the Mexican border, about 3/4 mile farther down the canyon. We said hi to the two Mexican military guys who had camped on their side, on a regular patrol it seemed. We exchanged a few friendly words and made our way back to the flycatcher area. 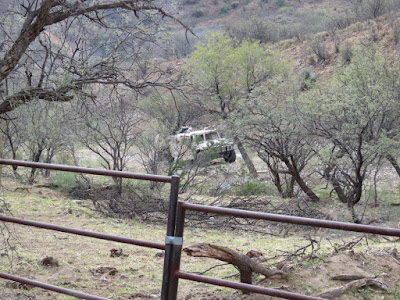 Here’s a view looking southwest up at the fence line that is the international border, and the overgrazed Mexican side is more evident than the fence itself. No, there’s no wall here as you can see, and nor need there be one. 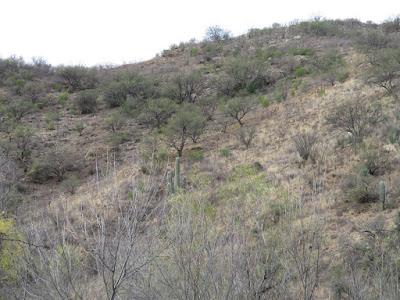 We finally found the Nutting’s Flycatcher at about 11:00 a.m., after some 2 1/2 hours of searching. It never vocalized, and we were lucky to find it about 1/4 mile away from the original location, upstream from where others had seen it. This is Nina’s photo showing the darker yellow belly, the yellow- and cinnamon-edge secondaries (rather than creamy white in Ash-throated), as well as the rounder and richer brown crown that bleeds into the ear coverts and face (which are all grayer in Ash-throated and blend more with the throat). These are very subtle points, and it was a good thing we had practiced on the Ash-throat. 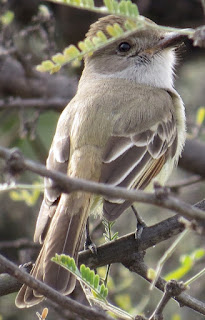 Lucky for me, both Galen and Nina were interested in everything and enjoyed just poking around, looking at plants and bugs. This cactus is Echinocereus fendleri var. rectispinus, the Pink-flowered Hedgehog. It blooms in spring. 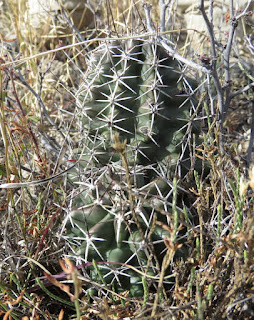 This is the common Ferocactus wislizeni, Candy Barrel or Fire Barrel. This one blooms in the summer, but I don’t know if the scarring in the crown will affect that. 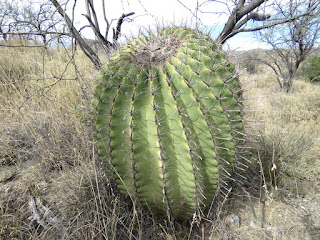 We had two very distant flickers. The first one I used playback to see it fly, and I glimpsed the yellow wing linings. My poor photo also shows the bright cinnamon cap of Gilded Flicker. 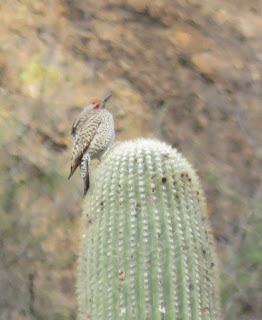 Galen spotted this very distant one later in the day, and thanks to a camera with 65x optical zoom, you can see the red tail shafts of a Northern Flicker. The crown is also browner and doesn’t extend as far back. 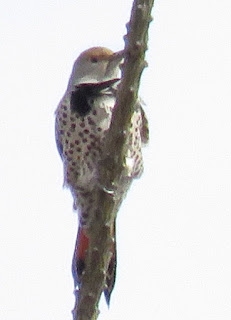 You wouldn’t know it in the summer time, but one of the dominant shrubs here is Forestiera shrevei, the Desert Olive, which I first identified last year on the Buenos Aires NWR CBC (http://birdernaturalist.blogspot.com/2016/01/the-san-luis-wash-on-buenos-aires-nwr.html). They are in full bloom now before putting on leaves, and they really stand out. They were also swarming with pollinators, largely honey bees as many of these native bees which appear to be some mining bee in the family Andrenidae. I’ll post an update here if my photos on Bugguide are identified. The bees on these bushes seem to be the primary food source for the Nutting’s Flycatcher.
Update 1/18/17 : bee expert John Ascher has identified this for me as the mining bee Andrena impolita, Unpolished Andrena. 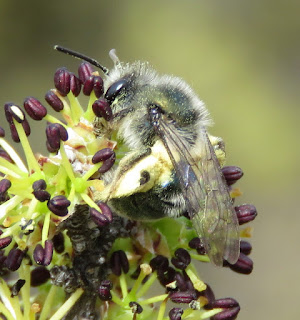 We saw two very different red-bodied wasps. This one is a parasitoid Ichneumonoid wasp, either family Braconidae or Ichneumonidae. Update 1/18/17: Entomologist and parasitoid expert Ross Hill has identified this for me as an Ichneumonid in the genus Cryptus. 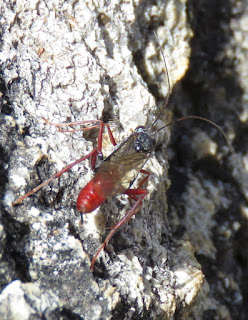 This red-bodied wasp is in an entirely different family, but I don’t know which. I thought it might be a spider wasp in the family Pompilidae, but I’m not so certain now, and I wonder if it might be a male velvet ant (distantly related and in the same superfamily as spider wasps). Update 1/19/17: John Ascher has struck again, conclusively identifying this one as Xerochares expulsus, which confirms my original suspicion as a spider wasp – family Pompilidae (and continues down the line of classification in the subfamily Pompilinae and tribe Pompilini). It appears to be a monotypic genus found throughout Central America, reaching the US only in the desert SW, and as of a 1985 monograph on the subfamily in California nothing was known of its biology. 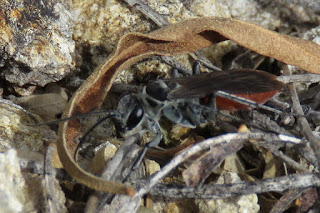 The landscapes here near the border are stunning, where drainages lead south into the Rio Magdalena watershed (unlike a vast majority of Arizona, which flows out the Colorado River). This is looking to the northeast back up California Gulch with Montaña Peak on the far left. 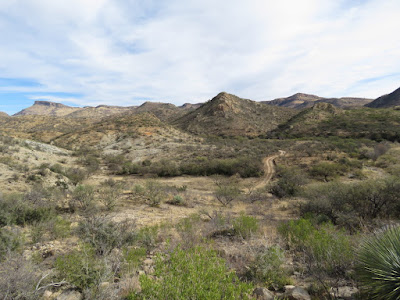 Here is looking to the southeast; Flat Top Mountain just right of center is just barely on the Arizona side of the border. 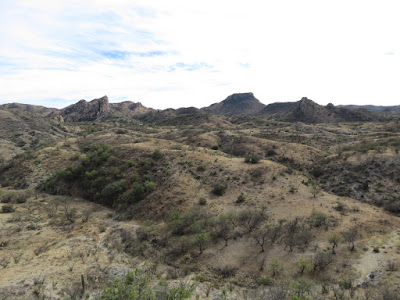 We climbed to a small peak and enjoyed the views. 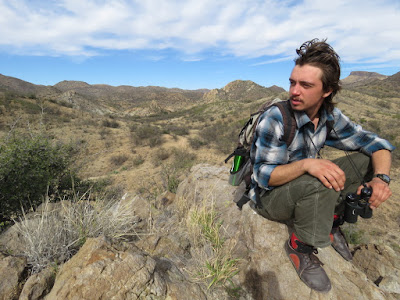