I'm in the district of Miraflores, a part of Lima, for the start of a WINGS tour led by Gary Rosenberg. This is Gary's last tour with WINGS, and I'm here to observe – my first step in learning how to lead this tour starting next year.
This is a West Peruvian Dove, common in the neighborhood near our hotel. It looks a lot like the White-winged Doves back home in Tucson, but with a more intense shade of eyeshadow. They sound completely different though, and there's little wonder it's now considered a separate species. I saw it in Ecuador in 1992 when they were lumped.

Even more common is the Eared Dove, a close relative of the Mourning Dove. It lacks the really long central tail feathers. It was odd, seeing these two species together in this dry habitat, behaving just like ours do back home. 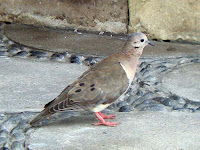 This is our hotel on a relatively quiet back road in the neighborhood. 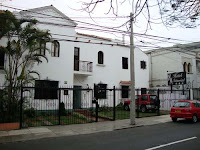 I took a walk a few blocks down to the Pacific Ocean and was surprised to find that we were on a bluff well above the shore. I had to walk quite a ways before I found a road down.

Here's a view looking north from a very upscale shopping plaza at the edge of the bluff. Down below on the spit is a fancy restaurant and club with Inca Terns roosting on it and feeding in the surf. 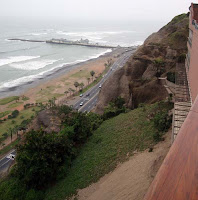 You have probably seen one of these flies on your bathroom wall. Or perhaps on some other bathroom wall, like the public restroom by the beach where I spotted this one. It's a moth fly, in the subfamily Psychodinae. Some species live their entire life cycles in the scum on the inside of a drain. They are harmless and do not carry any diseases. 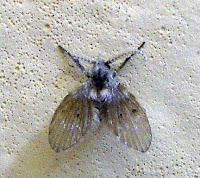 Outside, I spotted only one species of butterfly, this Fiery Skipper. Not such an exotic thing, its caterpillars feed on Bermuda Grass even in my back yard in Tucson. 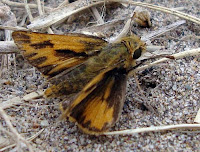 One of the more conspicuous birds on this part of the coast is Belcher's Gull, here an immature bird. 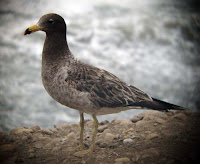 This is an adult Belcher's Gull. 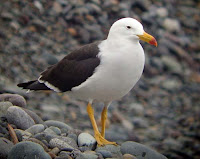