Today was largely devoted to visiting the ruins of Machu Picchu. As everyone knows, these are impressive Inca ruins, mostly because of the setting and their size. They’re not terribly old, and the vast numbers of tourists does detract from their appeal. But you have to be brain dead to not be at least temporarily awed by them.

We had a professional guide, Vilma, who met us at the train station in Ollantaytambo, about a 15-minute drive from our hotel near Urubamba.

After an hour-and-a-half train ride down the Urubamba valley (following the river where we saw Torrent Ducks), we arrived in the town of Machu Picchu, where we then walked to the line of buses waiting to take tourists up to the ruins. 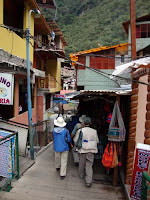 Here is the view down the valley from the entrance toward the road the buses bring you up. 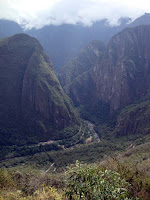 And here a typical view of the ruins. You can’t quite get the perspective to see how the ruins are situated in relation to the surrounding ridges, peaks, and valleys. It’s simply spectacular. 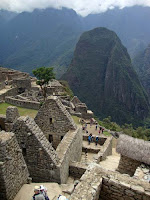 The Inca were not finished with the ruins before they abandoned them, with the approaching Spaniards apparently being a main factor. But the entire hillside apparently originally looked like this jumble of boulders, which they either chipped away or buried beneath terracing.

The three-hour guided walk from Vilma was interesting, and she was captivating. But it was still a bit much for me, and I was constantly distracted by the various forms of wildlife around the ruins.

This Epilobium sp. (or a closely-related genus) grew here and there on the rocks, but they try to keep the walls mostly plant-free. 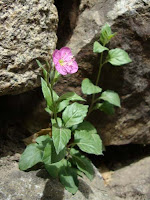 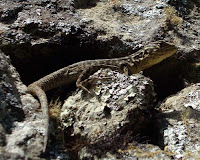 We saw two Northern Mountain Viscachas, Lagidium peruanum, close relatives of the Chinchilla, and in a disctinctive grouping of New World rodents that includes the Capybara, New World porcupines, cavies, and agoutis, among others. 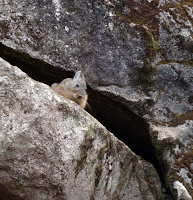 Incidentally, I learned from Vilma that the extra “c” in Picchu is there because you’re supposed pronounce it. Ma-chu peek-chu.

After lunch at the hotel by the ruins, we birded the road a bit, then rode a bus down to the bottom of the steep canyon and birded for the rest of the afternoon.

I was constantly distracted by butterflies, such as this interesting swallowtail. 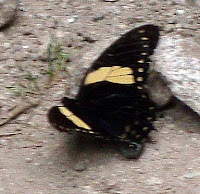 And this unassuming skipper. But I found the white edge and the distinct spots to be very unusual field marks for a grass-skipper. I’ll have to ask the experts to find out what it is. 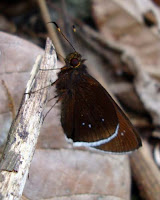 And despite it not being much of a birding day, we still managed 68 species such as this immature Fasciated Tiger-Heron on the river rocks. (Note: all my bird pics are either digiscoped or digibinned, such as this one. I held my little point-and-shoot camera up to my binoculars.) 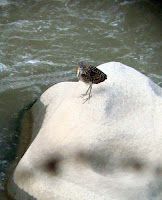 Here’s the group looking down at the tiger-heron.

Posted by Birdernaturalist at 7:08 PM