My Age Has Doubled in Freiburg

As I wandered through the student dorm complex here in Freiburg (StuSie am See is the nickname) and stood before this building that I called home for 10 months in 1990-91, I thought of the current Oregon exchange students that might be living there now. I occurred to me how young they must be, as I was only 20-21 then. And how that was 21 years ago. And…oops! That means they were only just born when I was a student here, I'm twice as old as they are now, and my age has doubled! Maybe I shouldn't have come up the hill around the corner after all. 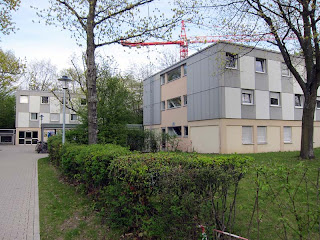 But it was a nice walk down memory lane to check out the birds on the lake that is located right behind the complex, Flückiger See. I checked out the birds here almost every day back then, keeping a record of everything I saw. It's a great location for student dorms, even though it's six light rail stops from the university.

Today there were some migrants in the trees by the lake, including Blackcap, Chiffchaff, and this Wood Warbler. 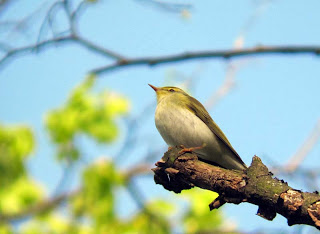 Only 1 pair of Red-crested Pochard was here, as were two pairs of Great Crested Grebes, one on a nest. 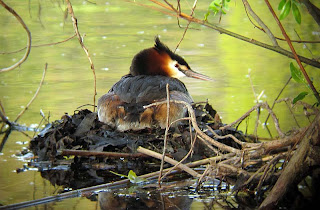 I also got a chance to visit with old friends, here Andreas by the budding garden he and his partner Markus started about a year ago in their really great new house. I had coffee and three kinds of fabulous cakes and torts at Andreas' while we caught up on each others' lives. 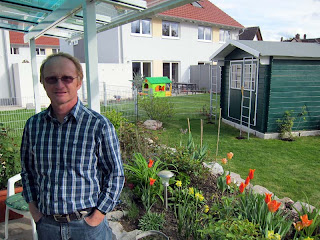 And I had lunch with Christoph and Uwe at the Markthalle in downtown Freiburg, more catching up to do. I'm staying at Christoph's here in Freiburg, while Uwe slipped out for lunch from his work at the Forestry Stewardship Council. Speaking of downtown Freiburg, it's a wonderful, charming place to walk around. The entire center is a pedestrian zone full of shops, and all the little streets are lined with channels called Bächle, Freiburg's hallmark. 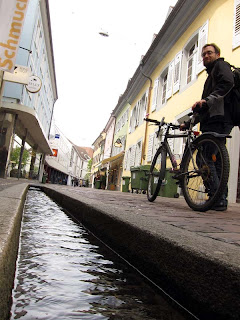 One thing I like about Freiburg is how many people use public transportation and ride their bikes. The light rail system is wonderful and the bike trail system is very well thought out. In Tucson, bike paths – if there are any – are barbarically located on the same level as the street and are often merely marked by a line that in effect only narrows the car's lane. There's often no place in an entire shopping center to park your bike because there is no bike rack at all. Even the gigantic Tucson Mall has space for about six bikes at two racks at opposite ends of the mall, but at least you'll be the only bike there (though I have to admit that after 5 years of lobbying, I finally got my local Trader Joe's to install a second bike rack). Here in Freiburg, if there's no place to park your bike, it's because 100 people have beat you to the racks. 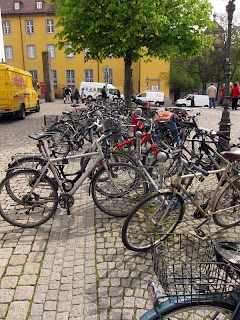 Another thing that strikes me here in Germany is how practical and sensible nearly everything is, even down to the engineering of the urinals in the downtown public bathrooms. The bulging center to the porcelain is carefully designed to minimize splatter and spray, redirecting it into the urinal rather than onto the walls and floor, but only if the stream hits a certain spot – and to encourage that, each urinal has a small fly painted on the spot where one should aim. Fluid dynamics and psychology ingeniously incorporated into a single, simple object. 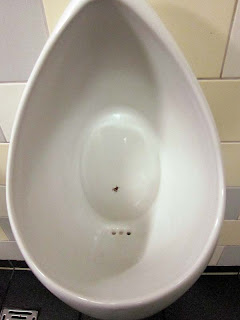 The main cathedral (Münster) is Freiburg's landmark, and I love perusing the farmer's market here. 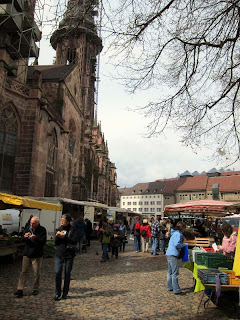 Christoph and his wife Friedericke sing in the cathedral's choir (Freiburger Domchor), and this evening I showed up at rehearsal to watch and listen. If I had arrived earlier, I might have staked out a seat across the hall, but Christoph beat me to it and got permission from the director to invite me to sing with them instead! It was a new program for everyone, so it was sight-reading and playing through the parts for some nice music, such as a Gregorian chant piece and some stuff by Schmider, Mozart, and Palestrina. Great fun. Below you can listen to 30 seconds of a choir practice (with the director tapping out the beat on his music stand), here Sicut Cervus Desiderat by Palestrina, recorded with my iPhone. They were actually quite good sight-readers, and I wish I could be there to hear the finished pieces. 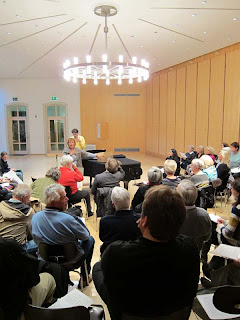 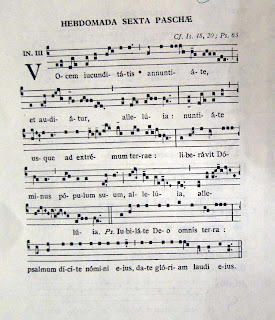 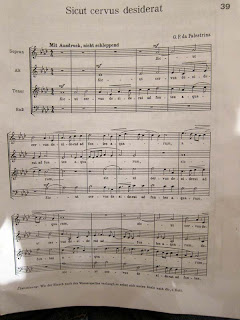