Wagbachniederung bei Waghäusel – A Mouthful for a Marsh Full of Birds

After our day in the Kaiserstuhl and in the edge of the nearby Black Forest, Michael and I had one more full day of birding before I moved on to my next visit. We started with a nice walk into the riparian forest that begins right across the street from his house in Meißenheim. We walked past a White Stork nest at the edge of town. It kept fiddling with its head down, probably turning eggs, then sat down. I should be able to get a better pic somewhere else. 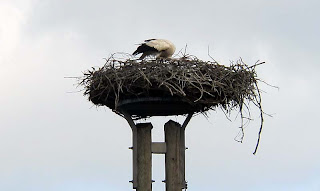 We had countless Blackcaps singing up a storm and even two Common Nightingales. Not an abundant species in central Europe, the shy Nightingale needs dense thickets, preferably with some standing water. I took a photo of one piece of typical habitat where one was singing. 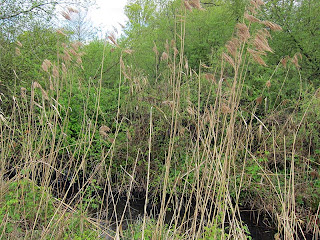 Then it was time to say goodbye to the family, with a quick photo shoot, before Michael and I continued our day of birding. 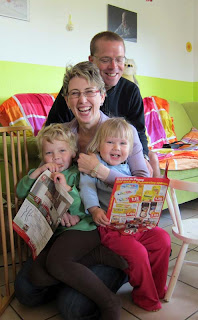 We drove north (through France, to avoid an Autobahn construction project!) to southwestern Germany's most famous birding spot – the Wagbachniederung bei Waghäusel. Not far from Heidelberg, it's a complex of basins with ponds and marshes, trails on the dikes, and it's full of birds. When I was living in Germany in 1990-9, it was pretty famous just for the small population of Eared Grebes (Black-necked Grebe to the Brits, to which the Latin and German names also translate). 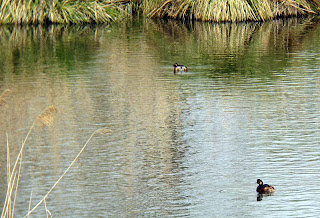 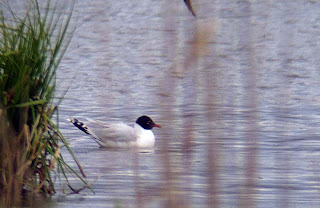 Waghäusel is also a great place for Bluethroats, of which we saw several, and I even glimpsed a Bearded Reedling flying back and forth across one stretch of reed. We saw several Purple Herons sitting on low stick nests partially hidden in the reed beds, another one of the birds that makes this place famous. 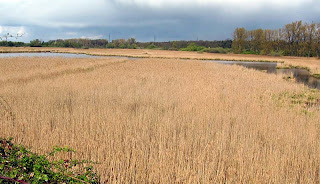 Just a kilometer down the road we stopped at an Aldi grocery store parking lot for this staked-out Crested Lark, a very local bird in Germany. Michael is standing below the lamp post where the bird is sitting. 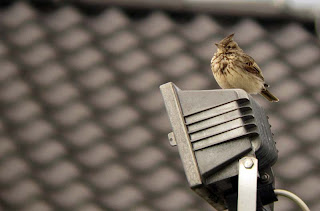 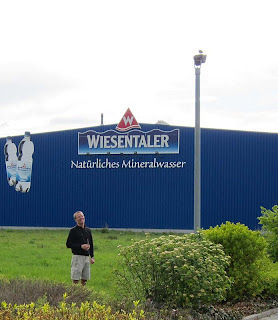 We finished our day of birding by Deidesheim, north of Neustadt an der Weinstraße, on the western edge of the central Rhine Valley, where the valley floor meets a sudden hilly region. The wine-covered lower slopes here are home to several pairs of Cirl Bunting, a very local breeder with only a couple hundred pair known in the country. We spotted a pair of these beautiful birds in short order and finished up with a Middle Spotted Woodpecker in the parking lot before Michael whisked me off to the train station for the next part of my trip.

Posted by Birdernaturalist at 6:38 AM