Birding Together After 20 Years 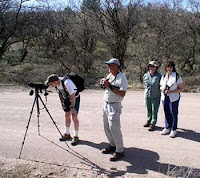 On Wednesday March 26, I led a local tour for four birders around Southeastern Arizona. From dawn to well after dark (for owls), we logged 111 species. This wasn't just any group of birders, though. Twenty years ago, Patty (third from left) was my high school biology teacher. It's been a real treat for the two of us to get to know each other again in the past few years. 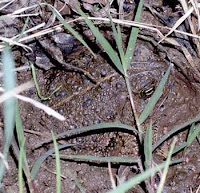 One of the funniest moments of the day was when we found this Woodhouse's Toad, singing while half buried in the mud. It was a very funny sound, like a sharp, buzzy whistle. Apparently, a birder before us had heard this and convinced herself she had heard an Elegant Trogon – just by going by the written description in the Sibley guide: "bwarr bwarr bwarr...." However, this was clearly only a "bwirrrrrrrrrrrrrr." I could mimic it somewhat, and it appeared that the toad was responding. And a second chimed in nearby as well.

The other tour particpants were Wayne, Patty's husband, and their friends Ralph and Sheri from Idaho.
Posted by Birdernaturalist at 5:42 PM