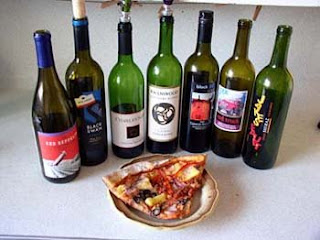 I hosted a terrifically fun party last night. About 15 people, 16 pizzas and 18 red wines was the final tally. When guests arrived with their wines, I had them cover the labels with paper and give each wine a number. Then as we all tried the wines, we rated their appearance, aroma, body, taste, and finish, using a guide on scoring I gleaned from the Internet.

The pizzas were even more fun. I made the dough by scratch, starting with a poolish sponge two days in advance. (Next time I'll take photos of the process.) Then each guest brought one to several pizza toppings. What variety! Each time I rolled out a pizza I had a veritable palette of ingredients at my disposal including four kinds of sauces, three kinds of cheese, chorizo (don't read the ingredients), chicken sausage, olives, roasted peppers, tuna, mixed wild mushrooms, roasted garlic, Thai basil, sundried tomatoes, and even tins of clams, oysters and octopus (Low Tide in Tucson). That covers maybe half of them. I'm going to insist on fresh figs next time – the author of my bread book insists they are excellent on pizza.

The top five wines were: