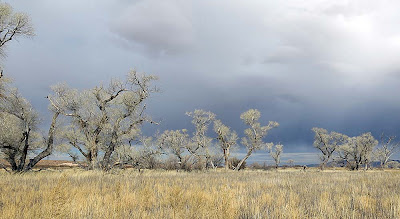 Being so far from any other Christmas Bird Count in the state of New Mexico and nearly touching the Portal CBC circle, the Peloncillo Mountains CBC almost belongs to Arizona birders. In fact, until recently it was compiled by Alan Craig of Portal. But while the core of Portal-area birders and a few visitors from Tucson make it a tradition, it's now compiled by New Mexican Nick Pederson, and there is always a good representation of birders from Santa Fe, Albuquerque, and even farther abroad.

This was my third year doing it, and I was assigned a particularly rich stretch of mostly dry riparian thickets of Animas Creek where it passes through a private ranch. My birding companions for the day were Steve Schmidt from Santa Fe and John Groves from El Paso, Texas.

This is the CBC that holds the all-time records for Crissal Thrasher (113 in 1992), Brewer's Sparrow (13,462 in 1999), and Green-tailed Towhee (389 in 2010). I was there for that amazing showing of Green-tailed Towhees, and I recall standing there with Christopher Rustay, pishing at a good patch of grass and brush, and having twenty towhees mewing in chorus at once. I knew right then that the count would be at least close to a record, but I didn't realize it would smash it by nearly 100 (the old record was 290, held by the Nogales CBC for forty years).

It was a different year this year. First of all I saw no Brewer's Sparrows all day. I was worried that we'd miss it altogether, but at the countdown some groups did report a few. Our area had only 33 Green-tailed Towhees, so it wasn't a record year, but not bad either. (Heck, in 2009, Atascosa Highlands had the annual high with only 19 – presumably the bulk of the population wintered in Mexico that year.) We did have a respectable 16 Crissal Thrashers, so if other teams had as much success Peloncillo Mountains should get the national high this year. In general there were many fewer sparrows this year, but an exception was Song Sparrow. Two years ago we had one in our area and the CBC had a total of six. This year we had nine in our area alone, and it's interesting to note that they were all the colorful, migrant "Eastern" Song Sparrows in areas of dry grass and brush, not the pale resident ones that live only near permanent water

For rarities, we had one White-throated Sparrow (in exactly the same spot where Christopher and I had one two years ago), a nice mixed flock of American Goldfinches and Pine Siskins, and three flyover Eastern Bluebirds. Perhaps the best find on the count was a flock of Lawrence's Goldfinches that one team had at a pool of water. 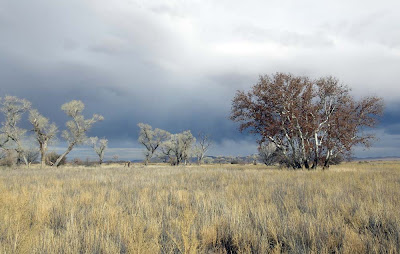 It's a hauntingly beautiful region. Fremont Cottonwood, Arizona Sycamore (at top), Netleaf Hackberry (below), and Wingleaf Soapberry (farther below) form thickets along the Animas Creek wash and provide habitat for an outpost population of Gila Woodpeckers and many other species. We ended the day with 44 on our list.


Posted by Birdernaturalist at 9:55 PM