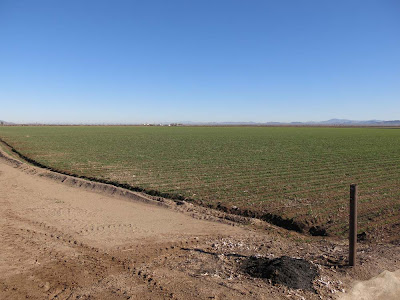 The Mountain Plovers were seen by birders the day before, earlier in the morning, and the following day, but not when Kathie Brown, Chris Rohrer, and I birded the Santa Cruz Flats the weekend before last. Where were the darn things? We still had a great day, and we were comforted by meeting a couple birders visiting from the East who were having the same difficulty.

I used to bird this area a lot in the late 1990's when I still owned a car, and it produced a lot of good birds for me, such as the state's first Pacific Golden-Plover, the third Upland Sandpiper, and vagrant Bobolink and Rufous-backed Robin. I don't get out there nearly as often any more, so when I heard that fellow bird bloggers and super enthusiastic birders Kathie and Chris were headed out there (links to their blogs), I invited myself.

We actually made our first morning stop at Silverbell Lake in Christopher Columbus Park on the west side of Tucson to see the Pacific Loon that had been found the day before. We didn't know if it would still be there, as lost birds like this might get up and fly away at any time. Chris said he couldn't sleep with the anticipation. We later learned that the bird was too weak to fly off and never did manage to feed here. It was picked up dead a few days later with an empty crop and no fat reserves. 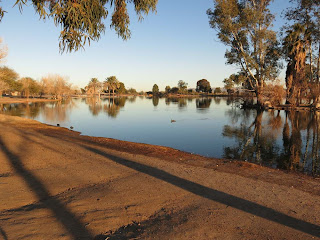 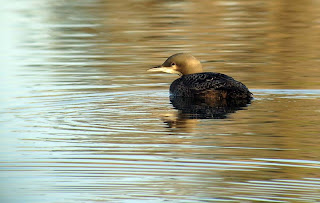 Once out in the flats (the really flat area west of Picacho Peak and south of Eloy at the I-8/I-10 interchange) Kathi and Chris kept track of every bird we saw as we crisscrossed the flats on the grid of roads, most of them exactly one mile apart. There are rows of pecan trees, actively cultivated fields that rotate between sorghum, wheat, and cotton, a few sod farms, some new plots of native brittlebrush plantations (perhaps for seed?), fallow fields that will slowly revert to desert perhaps 500 years from now, and little bits of native desert here and there. The area is well known for the raptor diversity, and as it turned out, today there were teams of volunteers counting for a raptor survey. We saw six species ourselves, including 8 Northern Harriers, 26 Red-tailed Hawks, 4 Ferruginous Hawks, 3 Crested Caracara, 12 American Kestrels and 3 Prairie Falcons. My eBird summary tells me that our day's birding total came to 69 species of 3531 individuals. 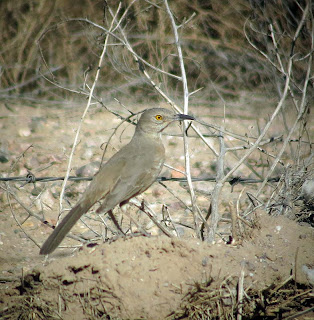 It can be a tricky bird to identify, being so similar to Curve-billed Thrasher. The bill is proportionately shorter and less curved, but they can be quite variable, and it takes a lot of practice to tell them apart. There are also subtle differences in color, especially in the face, and in the shape of the spots on the breast. But these are also variable, and juvenile Curve-bills are especially good at fooling birders. A better measure is the habitat. Curve-billed Thrasher is essentially anywhere with a few cholla cacti. It can be hilly or flat, rocky or sandy, dense urban areas or pure desert. Bendire's, in general, needs it flat, with loose soil, weedy and grassy with thickets, rows or hedges of mesquite, and no cholla. They don't mind being near houses but seem to stay away from larger urban areas. The two species are found in close proximity very rarely.

At the end of the day we got to hear one sing its most distinctive feature – a rambling, twisting, continuous pinball machine warble that lacks the obvious repeated phrases of most thrashers. This one was singing at the Arizona City development around the lake there and shows its finely marked arrowhead-shaped spots. 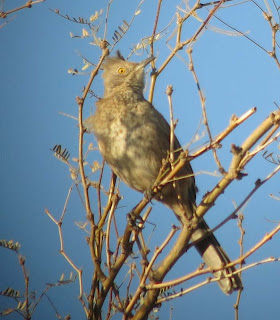 This is a Sage Sparrow, one of our winter visitors with a very picky habitat preference – very flat areas with scattered saltbush (Atriplex). Rocky desert with any other type of brush and cacti just won't do. So they're rather restricted in range here, and the stretch of Sunland Gin Road north and south of Harmon has been the best area since I started coming out here 15 years ago. 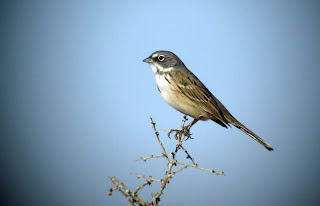 Other good birds for the day included a couple of Common Ground-Doves, tons of Horned Larks and American Pipits, a calling and flyover Chestnut-collared Longspur (more were seen and heard by birders here the next day), and one field with a gross of Killdeer visible from one spot. That's a dozen dozen.
Posted by Birdernaturalist at 10:02 PM