This was my first time ever doing the Green Valley-Madera Canyon Christmas Bird Count. It's close to where I live and is full diverse habitats and lots of birds, but until this season's, scheduled for Friday, December 28, it just hasn't fit my schedule. This was to be my first of three back-to-back CBCs, something I've done only once before.

John Reuland (who had done the Buenos Aires NWR CBC with me) joined me for the hike up to the slopes of Mount Hopkins via the Carrie Nation and Vault Mine trails in Madera Canyon, one of the most famous birding destinations in the US. In summer. Here's a view looking eastward toward Mount Wrightson looming over the opposite side of Madera Canyon.

We actually started in a side ravine full of Arizona Madrones, only to discover much ice and no berries. And few birds. Actually on the way down we had two of our best birds, Townsend's Warbler and Olive Warbler. It's actually been a boom winter for the former. 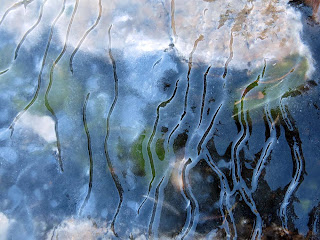 Later in the morning we did run into plenty of mixed flocks, most of which seemed to have an attendant pair of Arizona Woodpeckers. Note: the bird photos are all taken through my binoculars. 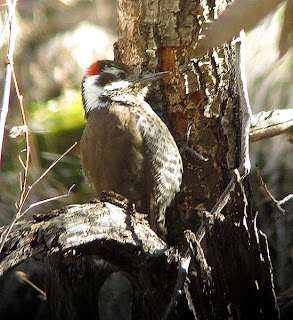 It the northeast-facing upper slopes of Mount Hopkins, John and I were walking nearly a half-foot of snow. 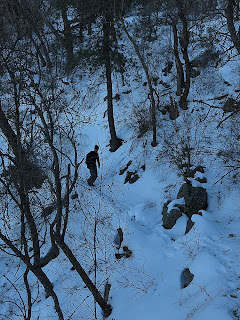 Slopes that received more sun had lost most of their snow, and here the slopes were brushier, dominated by Alderleaf Mountain-mahogany (Cercocarpus montanus, which I learned as C. betulifolia years ago). I figured some pishing and owl imitations in here would produce some Spotted Towhees, and I was right. Plenty of both Dark-eyed and Yellow-eyed juncos also responded. What surprised both of us were these Cassin's Finches. An irruptive species this far south, Cassin's Finch had been utterly unreported in southern Arizona this winter. I recalled the amazing irruption we had in the winter of 1996-97, which also featured Red Crossbills and Clark's Nutcrackers, neither of which we were to see today. 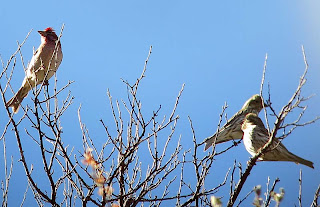 Our best bird of the day was Golden-crowned Kinglet, three of them with three Ruby-crowned Kinglets foraging rather sedately at eye level in a pine tree below the trail, not from here. This is looking up at Mount Hopkins (and the Smithsonian's Whipple Observatory) from the unnamed saddle between Jack Mountain and Mount Hopkins. On the other side of Jack Mountain behind us is Josephine Saddle. Down to the right is the Carrie Nation fork of Madera Canyon and down to the left is Josephine Canyon. 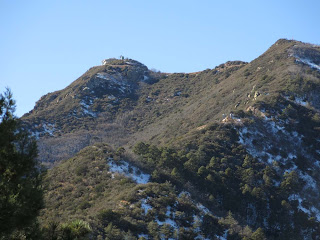 Zooming in on Mount Wrightson in the opposite direction. With binoculars we could see hikers up there this day. It was cold but sunny and calm.

Looking back down Madera Canyon. 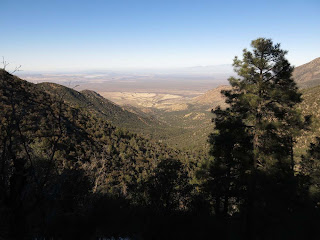