I actually got out birding twice this past week. I'm home between tours at the moment (and actually have been so for a few months now), but I'm mostly sticking to the computer, trying desperately to catch up on many tasks. I leave for Baja California in just a week.

My target last week was the Avra Valley just west of Tucson where I hoped to catch up on a report of a wintering flock of Eastern Meadowlarks.  It's a puzzling biogeographical and ID problem here in SE Arizona. We have resident Eastern Meadowlarks that don't migrate and can be found year round on their territories, but their habitat is quite specific – high elevation native grasslands, not weedy fields and agricultural lands. If you find meadowlarks in that habitat here (and you will find them there only in the winter), you are probably looking at Western Meadowlarks, a very migratory species that vacates much of the Colorado Plateau and Great Basin. 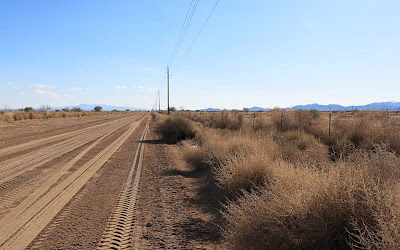 However, there is apparently a small population of Eastern Meadowlarks in central and north-central Arizona that is migratory. Where do they winter, and can they be found around here in winter? Looking at maps on eBird it seems that they might all winter in the Gila River valley west of Phoenix. But that's assuming all of those entries are correctly identified. You see, telling the two apart is not so easy.

As it turns out, the entire flock of 18 meadowlarks on Reservation Road (a few miles west of Saguaro National Park in the middle of the valley) were all Western. Before I had a chance to study any intricate field marks, I noted the telltale "weme?" call notes of several birds as they flew and disappeared into the tall weeds. It's the only bird I know that calls its own four-letter banding code. Their flight was also rather buoyant and with more consistent flapping. It's been pointed out to me by Jon Dunn that Eastern Meadowlarks have a faster and more intermittent wingbeat, holding their wings down between flaps in a style vaguely reminiscent of Spotted Sandpiper.

The classic, supposedly clinching field mark is the yellow on the throat. On Eastern it's restricted to the throat, with the white malar tract of feathers clearly delineated from the yellow throat. On Western, the yellow bleeds across into the malar region. The problem is that this is hard to see without a really good view, and only on adult birds is it really obvious. Here's an obvious bird – where you can see yellow down from the bill, even though the bird is slightly facing away. That's because you're seeing yellow in the malar; the center of the throat isn't really even visible. 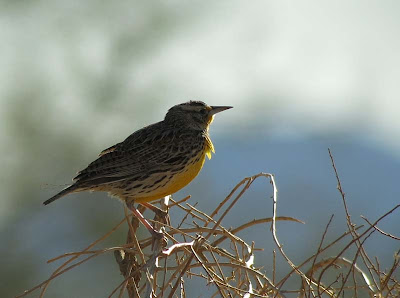 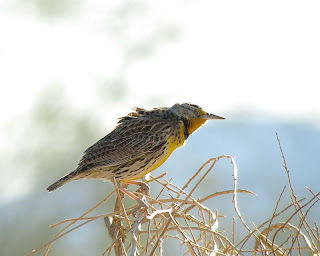 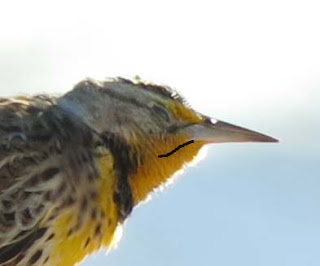 But some birds aren't so obvious – on this one the malar even looks contrastingly white: 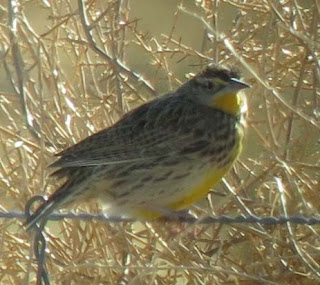 But here it turns with a better profile, and though it's faint, there is some yellow in the lower part of the malar region. 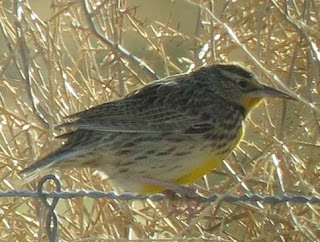 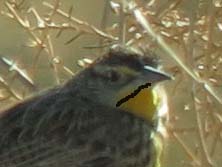 It's even harder with immature birds like this that have no real yellow on the throat at all. Then you have to trust your ears. Judging how dark the head streaks are against how pale the background of the head is can be useful if you've seen lots of birds. And when they fly, the amount of white in the tail is a good mark, but it can also be very hard to see. I guess the Loggerhead Shrike is looking for smaller prey. 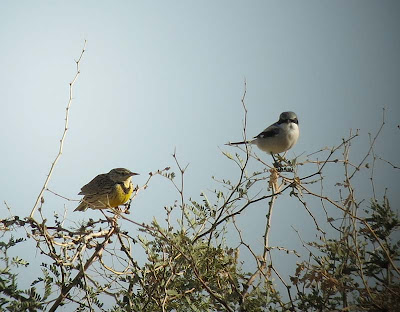 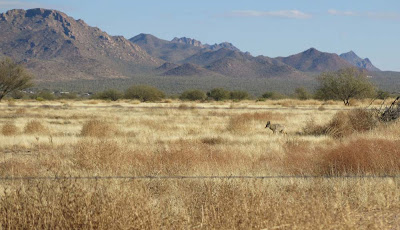 Posted by Birdernaturalist at 8:31 PM