Patagonia, Arizona was the 3rd CBC I did this winter, on Thursday, December 20. I already posted some photos from the first two that I did, Buenos Aires NWR and Tucson Valley (see the links to the right for older posts), so this is the last one for the blog.

I've done this CBC ast least three other times in the past 14 years, always being assigned an area along Sonoita Creek. This time the compilers asked me to do a section in the highest elevations of the Patagonia Mountains, an area I had been to only once before. I was in a team with four others – Craig Anderson from Phoenix, and Tim Helentjaris and Bev and Andy Robertson from Tucson. We divided up into two vehicles and started our birding at about 17°F in the old mining town of Harshaw. No birds. So we continued up to an open area at the top of the road that had already received the morning sun. A huge flock of Chipping Sparrows and assorted subspecies of Dark-eyed Juncos greeted us. Eastern Bluebird (Azure) called from the open juniper woods. Then we split up for the rest of the morning, Craig and I heading up the north road to Guajolote Flat (guajolote means turkey in Nahuatl).

A fire had gone through here last year, but the grassy areas still harbored flocks of sparrows and juncos. This is looking east; in the distance are the Huachuca Mountains, across the San Rafael Grasslands. 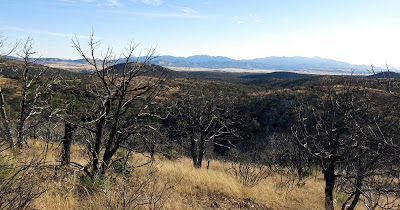 Ice crystals of uniform size, with sunlight refracted through them cause this irisation known as a sun dog. It indicates some very cold air above us. 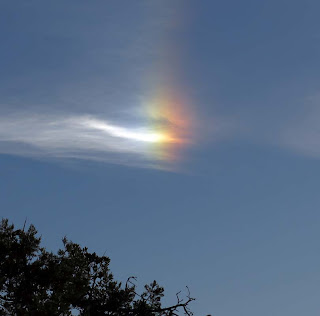 We reached the crest of a low pass in the Patagonia Mountains and found ourselves looking northwest over the Santa Cruz Valley and towards the Atascosa Mountains, where I would be doing that CBC in two days. 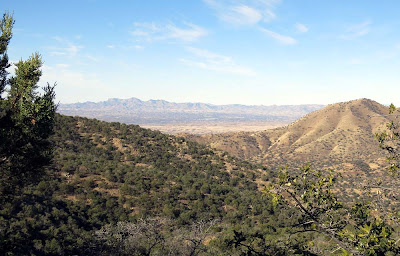 Later in the afternoon Craig and I wandered up a darker canyon into some nice patches of Chihuahuan Pine forest that apparently has Elegant Trogon in the summer. It's pretty protected from the sun this time of year, so a light dusting of snow lingered. 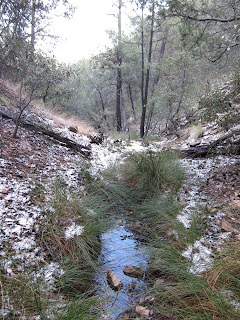 Even then, this incredibly hardy vebena in the genus Glandularia (there are two common species here) was still blooming. 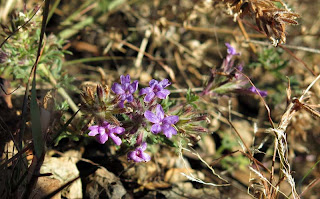 I had been pishing and imitating owls all day to bring in mobs of small birds, but in this canyon a pair of Whiskered Screech-Owls started hooting back at me. There weren't many appropriate trees, so spotting them wasn't too difficult. 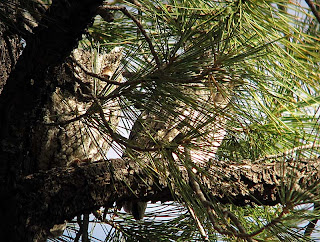 A couple other highlights from the day were Townsend's Warbler (three individuals) and an Olive Warbler, all rather scarce birds here in winter.

On our way back down to Patagonia for the countdown dinner we stopped to whistle for Montezuma Quail (no luck) and admire the light on these gorgeous mountains. 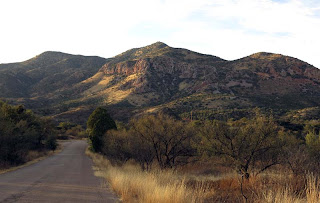 Total count for our area:
33 species
867 individuals
Posted by Birdernaturalist at 4:00 AM