A Cassin’s Sparrow in the Yard!

I had the pleasure of guiding a couple of birders around Tucson today. I had guided Allen and Janine Elster (whose last name means magpie in German!) several years ago, and when they had a free day in Tucson following a professional meeting, they got in touch with me again, hoping to see some western migrants, such as warblers and woodpeckers.

We started in my yard on N Vine Avenue in Tucson, where the hummingbird feeders were pretty active. It’s always nice to start a day with a Broad-billed Hummingbird. But before long, a little brown bird popped up in a bush on the back fence where the huge flock of House Sparrows usually hangs out. But this bird was smaller, and my first instinct was to call it a White-crowned. Then I got my bins on it and saw a narrow postocular line that widened into a tiny triangle at the rear end, and I revised my ID to Lincoln’s Sparrow. Then I actually saw the face and breast, and the overall impression hit me like a rock – Cassin’s Sparrow? Wait, that shouldn’t be here in an urban yard, and there only a very few that breed north of here, and even then not every year.  Then it flew to the opposite side of the yard, and I ran inside the house to get my camera, my mind reeling. Was it maybe a juvenile Rufous-crowned, which breeds within 6 miles but doesn’t normally wander more than a few hundred yards from its habitat? Amazingly we re-found this notoriously skulking bird, and I got some photos, eventually coming to the conclusion that it couldn’t be anything other than a Cassin’s Sparrow. I’ve had a few rarities in the yards over the years, including Ruddy Ground-Dove, Dickcissel, Clay-colored Sparrow, Broad-winged Hawk, and even the first state record of Ruby-throated Hummingbird. But this is probably the most unexpected bird I’ve found here. 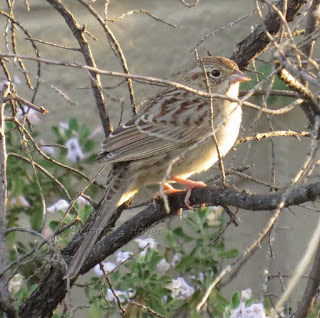 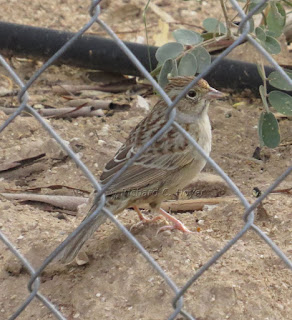 Before we moved on to other sites, a Black-throated Gray Warbler chipped and I pished it into view. It ended up being the only one for the day.

At Evergreen Cemetery we loaded our lists with many Vermilion Flycatchers, and migrants included Lark Sparrow, Wilson’s Warbler, and a very furtive MacGillivray’s Warbler that only I saw. 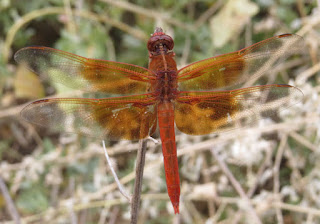 Back in my yard, this gorgeous Vermilion Flycatcher hinted that we might be in for another big winter for this species. 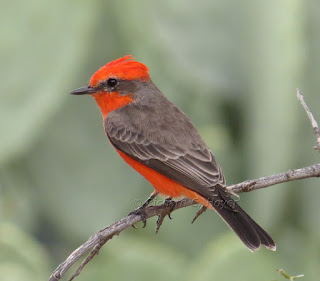 Posted by Birdernaturalist at 8:47 AM