Cedar and Bartolo Canyons for the Atascosa Highlands CBC

On January 2, I participated in my favorite CBC, the Atascosa Highlands Christmas Bird Count.

On New Year’s Day, I drove my little rental car down to Ruby Road west of Nogales and found a place to pitch my tent on a side road, just a mile or so east of the ghost town of Ruby.  On my way in, a Bobcat crossed the road just outside of the town of Arivaca. The weather forecast was right on – calm, clear, and not too cold. As I pitched my tent, I swear I twice heard the single hoot of a primary song of Long-eared Owl, but it called only when I was making lots of noise with my tent. When I stood still, I heard only a very distant Great Horned Owl.

I awoke at 3:00 a.m. to begin owling and just as I finished packing my tent and listened, a Barn Owl screeched overhead. I use a bit of playback and it flew right over my head, calling some more. This is a good bird in the circle, and indeed it was the only one on the CBC. I surprised a White-tailed Deer (Coues’s) in the middle of the road, and a Striped Skunk (with an all white back) ambled along unperturbed.

Before long I had a Whiskered Screech-Owl whistling back at me right on Ruby Road. I made more stops as I headed east, but birds were very quiet, just a couple more very distant Great Horneds. I eventually got one more Whiskered Screech-Owl to whistle back, and these two were the only ones on the CBC. I parked my car back where I had camped, made my coffee, and walked out to Ruby Road where I had planned on meeting up with Bill Lisowsky around 6:00 a.m. to find him already waiting just before 5:30. We owled together westward on Ruby Road, making a couple stops with no responses at all though a herd of Collared Peccaries was fun to see. Finally at one stop we heard some odd squeaks and squawks from the trees on the hillside, and then the distinctive “kwok kwok” of a Long-eared Owl! I tried playing various calls, and while there seemed to be some response, maybe even a wing clap, they never came closer and moved higher up on the hillside. Finally, we made a stop at a wide, brushy wash with scattered very large ash, walnut, and a mulberry trees and almost immediately had a pair of Western Screech-Owls.  We also flushed two Antelope Jackrabbits. Not a bad start to the day.

Bill dropped me off at Arivaca Lake where I found a White-throated Sparrow and two pairs of Abert’s Towhees before Paul Sheppard, my neighbor and landlord arrived from Tucson with his big red canoe. In a few minutes we were peacefully paddling on a smooth lake and counting ducks, coots, and grebes and pishing at the narrow strip of riparian vegetation to find passerines. We ended up finding the only Cinnamon Teal and Common Merganser, as we paddled in and out of four long fingers; it’s the many drainages, hilly terrain, and thorn-covered mimosa scrub that makes it very difficult to cover this lake by foot. A boat is the perfect means to count the birds here. 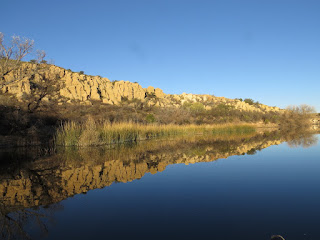 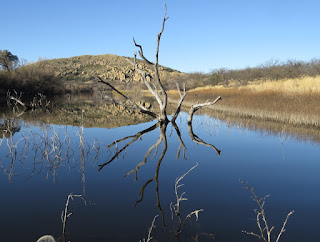 The largest drainage is Cedar Canyon, and with such high water, the entire mouth of it was filled with a huge wet grassland, perfect for sparrows. I pished in a large group of Song and Savannahs, and with playback got a very aggressive response from a single Swamp Sparrow. I managed a really lousy photo, but I also got a recording of the distinctive call notes. 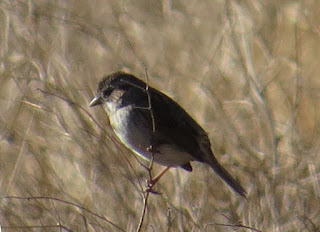 This is one of two Belted Kingfishers we saw. 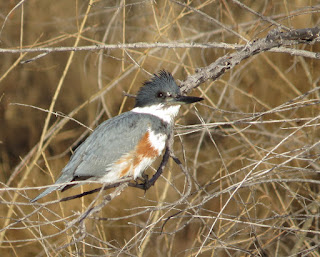 We finished the lake after about 3 ½ hours, and Paul headed home while I hiked back to my car via Cedar and Bartolo Canyons. I had told Jake that this was the area I wanted to do, but we were each thinking of a different canyon. Jake was thinking Chimney Canyon, which is the second largest drainage into the lake, but about half as big. He even wrote it to me in an email, but I read “Chimney” and thought “Cedar,” as that is what I already knew I was doing. In the meantime, Jake actually assigned another team to cover Cedar and Bartolo Canyons. Oops. But in the end, it looked like we had rather different bird lists, covering the canyons in very different ways, and so Jake was able to merge our lists into one area list. This is near the start of my hike. 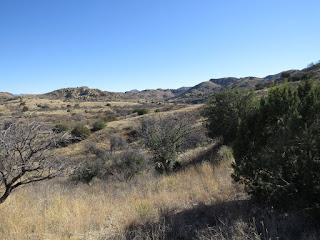 Within the first 10 minutes I pished in this female Hepatic Tanager. 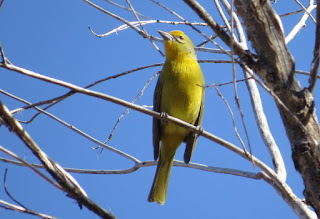 I was flushing birds it seemed with every step. And if for some reason I didn’t see or hear birds, I would merely pish and whistle some screech-owl (both species) or pygmy-owl (two species), and almost immediately would have a response from Hermit Thrush, Bewick’s Wren, Ruby-crowned Kinglet, and either juncos or Chipping Sparrows. Birds were everywhere. Twice I got a Black-chinned Sparrow to come in, a scarce bird in the circle. 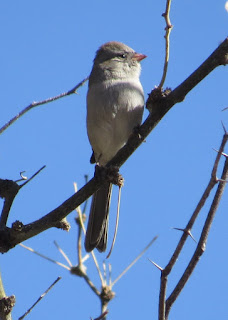 This was one of the more interesting geological formations on the hike, actually visible from the lake. My hike took me right by it. 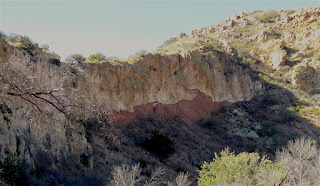 The geology is perfect for Canyon Wren, Rock Wren, Canyon Towhee, and Rufous-crowned Sparrow. In fact, this circle gets far more of these species than any other CBC in the world. 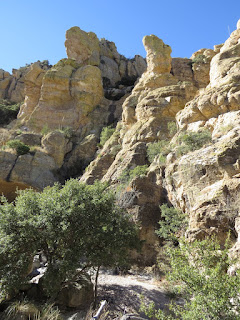 The previous week had been cold, and in shady corners there was still some ice on the pools. In this one, the water had receded under the ice, and water droplets on the bottom side of the very flat sheet of ice were accumulating in a random pattern. 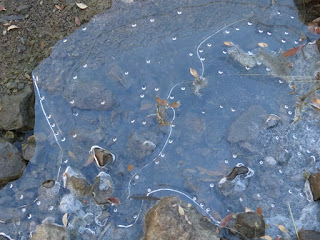 Rufous-crowned Sparrows especially like the rocky and brushy slope habitat on the right. If every participant were to hike a canyon like this, pish and toot all the time, and be familiar with the nearly imperceptible seep note, we’d probably rack up twice as many as the usual 300 or so. I had 38 myself, which is more than most other CBCs get in total. 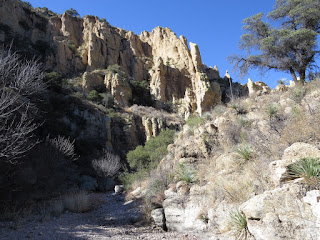 It warmed up enough for a few butterflies. I saw Dainty Sulphur and Sleepy Orange, in addition to this Vanessa virginiensis, American Lady. 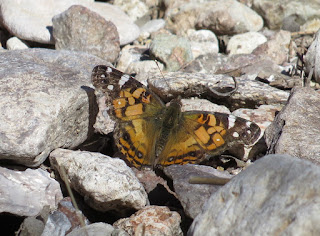 And this Pyrgus albescens, White Checkered-Skipper. 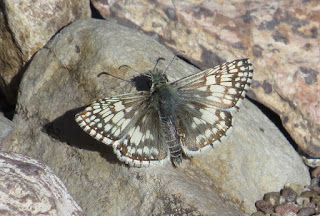 Higher up the canyon I had patches of more dense oak woodland. 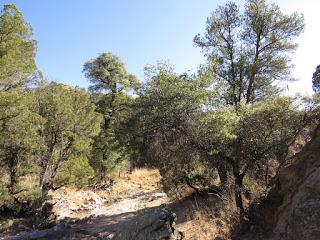 These Emory Oaks are the favorite habitat of wintering Red-naped Sapsuckers, and this year there were huge numbers. With its white chin, this appears to be an older female. 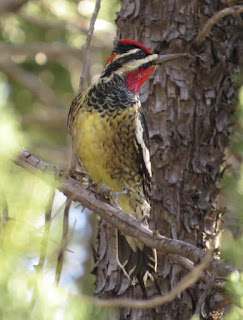 This one has only a tinge of red on the nape and is less colorful overall, and is probably a first-winter female. 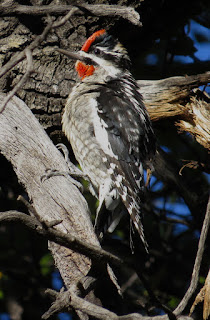 I saw a three that had too much red for a typical Red-naped and I assume they are Red-naped x Red-breasted Sapsuckers. 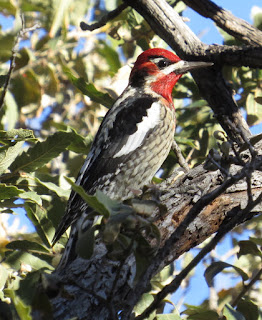 But this one had so much red, I thought I’d look more closely at the photos later. And then after comparing them with my photos from California, I realized that this is a better fit for a daggetti Red-breasted Sapsucker, quite a rarity in Arizona, and the first I have ever found here. 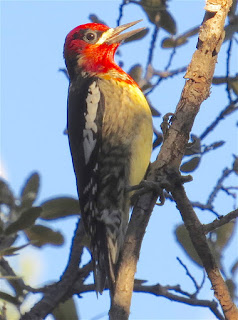 Another bird in unusually high numbers was Townsend’s Warbler. I alone had 14 which is more than this entire CBC gets in most years; the record was 16. These are from the Rocky Mountain-Cascade breeding population, which largely winters in Mexico and northern Central America, here at the very northern edge of its winter range. It’s quite separate in winter and breeding range from the ones I had seen last week in California. 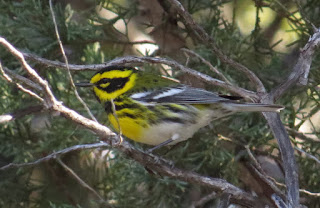 Some more scenery as I progressed up the canyon. Among the mammals I saw were Mule Deer, Rock Squirrel, and a Gray Fox. This last one was a hint that I would be better off going up the slopes to get to my car. 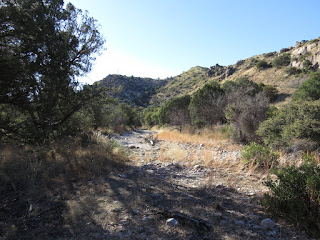 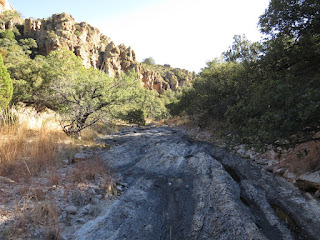 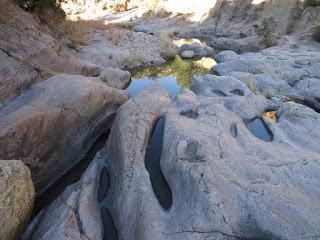 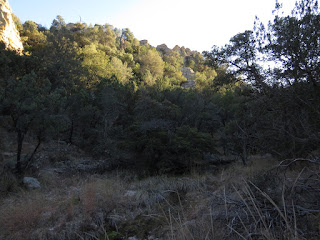 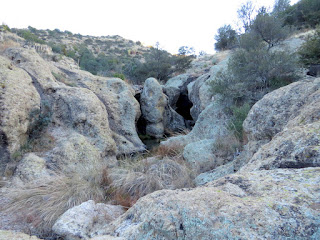 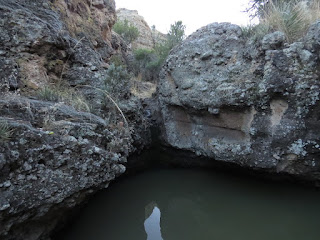 The topography for climb out was very easy here. 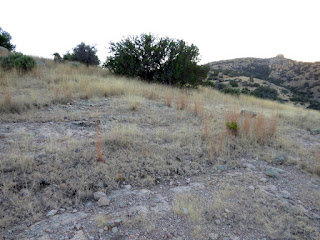 Back up on the ridge near my car, I gasped when I looked at the sun setting on the Atascosa Mountains.

A 300° panoramic iPhone shot is at the top.
Posted by Birdernaturalist at 3:14 PM