I almost forgot. Three days before my birthday, which was a week ago tomorrow, I hadn’t made any plans other than what was surely going be a pleasant dinner out and movie with my close friend Hal. He was planning on treating me for my birthday, but I didn’t know that. But what about the idea of spending the evening in the presence of all my wonderful friends in Tucson? Thanks for the reminder Corey! I rescheduled with Hal and sent out a quick email for a potluck invitation (but regrettably forgot to add some people). And Hal ended up coming over after all. What a great evening.

I frantically cleaned up the house (which I’ve been slowly working on all week) while at the same time baked two cakes – after the German tradition of hosting a birthday party, where the host provides the cake. One was the Cook’s Illustrated Classic Chocolate Layer Cake, and the other was from a German cookbook I bought in 1991 for a Zitronentorte (lemon cake). The Zitronentorte vanished, and only a small wedge of the chocolate cake was left over after the evening. I also had made some pizza dough the night before and as people were arriving baked five pizzas.These photos are from my friends Beth and Greg. 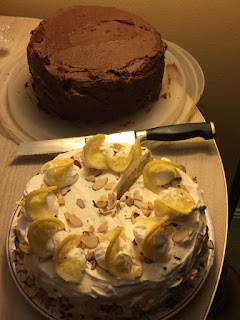 My friend Andrew and I. 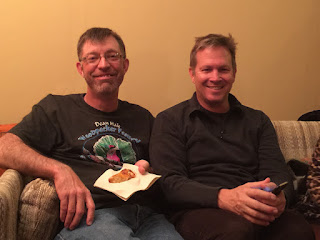 The nature of my potluck parties has changed a bit over the past 2 years – there are now up to four little kids running around, threatening to break into the Chlorox and other cleaners under the sink. 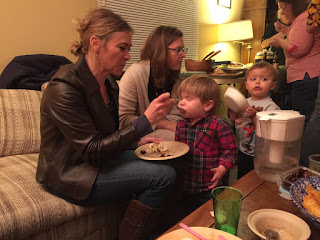 But I also have fun with them. Both Pierce (on my lap) and Roland (in the foreground) love to play on the piano, but in very different ways. Roland wants to push every button and key, turn every page; for Pierce rhythm is all important. Missing from these photos are Grayson and Owen. Next time. 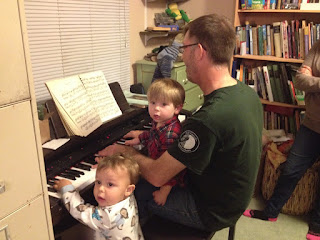 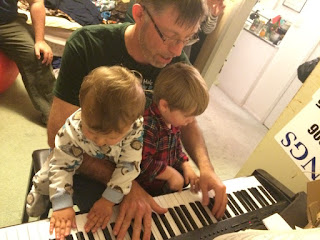 By the time everyone left, many bottles of wine, beer, and a half gallon of Sazeracs had been consumed, but I still made off with quite a haul of fantastic wines, rye whiskey, and even some Pisco. A perfect excuse for using up some of the extra egg whites left over from the recipes. 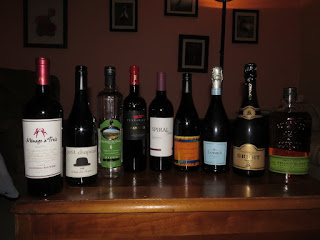 Posted by Birdernaturalist at 3:46 PM