I’m home for only just four weeks between travel, and the time is flying. I’d have no idea what happens to all my time, as I’m trying to be good and work at home instead of going out and playing. But it turns out there are plenty of distractions around the home too. My desk has never been so tidy until this week, for example. And now I’m caught up on my blog – the next posting might not be until my northern Peru tour begins in just under 2 weeks.

But my biggest distraction is the kitchen. For starters, I had to do something with the 20-some Meyer lemons that my cousin Tom gave me in Sacramento. I’ll try an experiment with two different methods of making limoncello, recipes I gleaned from the web. On the left is the more standard method of macerating the peel of many lemons directly in the alcohol. Since this variety of lemon lacks the bitterness in the pith, I didn’t try to remove it from the peels. There are 15 lemons in 1.5 liters of alcohol, which is ¾ 40% vodka and ¼ 90% Everclear. On the right is what seems to be an improbable method. Two lemons are suspended in an airtight container over the alcohol, which is 750 ml using half of each of the same types as above. After a month or more, the zest of two lemons is then added and allowed to macerate for just 15 minutes before being strained. Then both are diluted with the same proportion of simple syrup. I’m looking forward to the taste test, which will probably happen in late May. 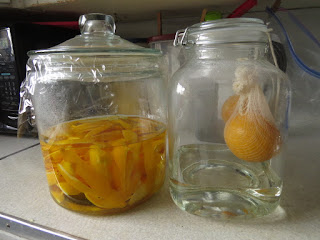 I’m baking, of course. This is simply a whole wheat bread following the Naturally Leavened Caroline Wheat Hearth Bread recipe in Peter Reinhart’s Bread Revolution. I made it to show my friend Beth some of the techniques in the book. And I needed a good excuse to use the amazing bread knife she gave to me for my birthday. 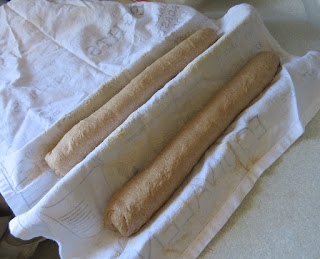 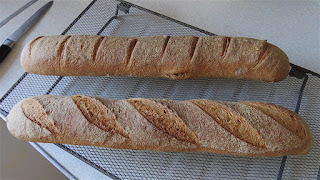 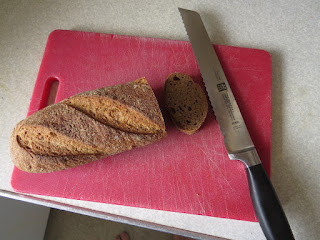 I also needed a good loaf to make the croutons necessary to complete the French onion soup I had to make to use up all the extra onions I had lying around. I cooked the onions in the oven for 2 ½ hours one evening. Then next morning I browned and deglazed the pot four times (three times with water, the last time with dry sherry) before adding the broth, herbs, and completing the soup. 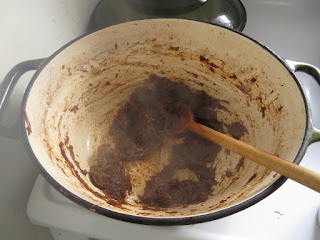 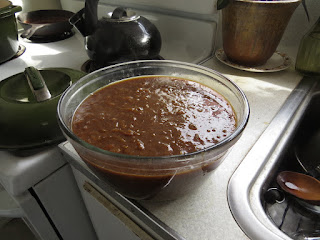 I’m knitting a little bit, but not nearly as much as I’d like. I finally finished Clayton’s socks, the yarn for which he bought when I was visiting in San Francisco last early July. 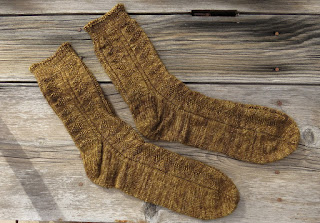 And I’m enjoying my garden, which I sowed as the airport shuttle arrived on October 8. Thanks to a timer on a drip system and what’s been a very good winter for rains, everything has been growing well. 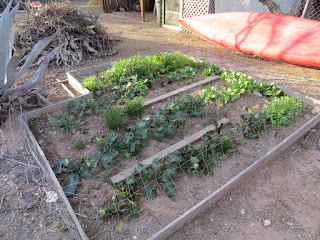 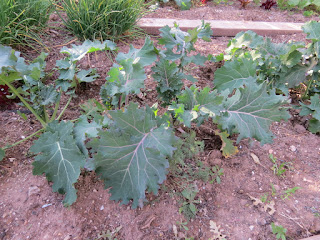 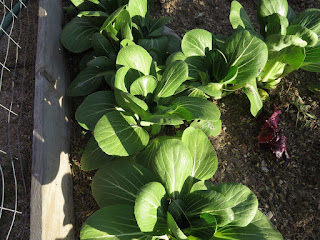 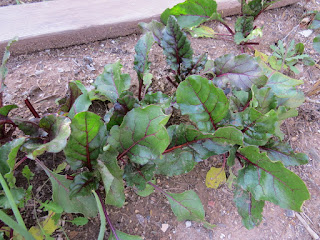 And a row where in my rush I accidentally sowed lettuce, carrots, bok choy, and mizuna all together far too densely. 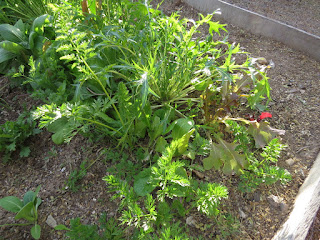 Posted by Birdernaturalist at 4:35 PM