I got home last night from a long weekend of camping and blissful but exhausting birding in some of the most beautiful landscapes in southern Arizona. I saw a huge number of birds, but more on that later. Einstein, my neighbor and landlords’ soft-coated wheaten terrier died yesterday. He was 11 years old.

He was a very loving dog, always greeting me with a quick “kiss” on the ear. He was also very energetic, loving to play tag. He would first crouch as if hidden in plain sight on the patio. I would sneak up slowly, and just when I’d get within reach, he dart off and run a huge circuit around the yard and stop only if he saw that I wasn’t pursuing him. 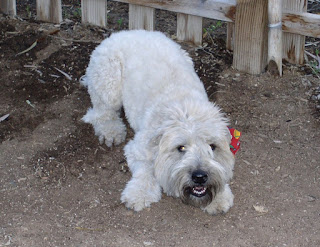 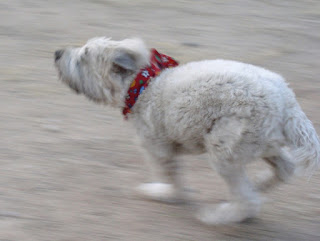 There were times  in the hot summer that I would babysit him when Paul and Irene went to work. He found that the bathroom floor and the side of the tub were the coolest part of the house, and this is how he would pass the day. 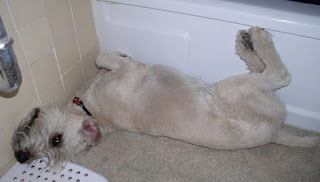 He wasn’t very bright though, which makes his name all that funnier. He would perk up and dart around if you said “squirrel!” and he even learned the smell and would dig in the holes of the Round-tailed Ground Squirrels in our yard if encouraged. But if a squirrel would run in front of him, he wouldn’t recognize it as the target.

Two years ago he was diagnosed with Hemangiosarcoma, a common cancer in dogs, and was given about 4-5 months to live. It appeared to go into remission; he rebounded after having a huge tumor removed, and though he acted more like an older dog, seemed happy and healthy. But then a few days ago he took a very rapid downturn, not able to even stand yesterday, and a vet confirmed extreme anemia, a sign of the last stages. He didn’t have to suffer long. I’ll miss him. He was my buddy.
Posted by Birdernaturalist at 11:21 AM