Ever since the Atascosa Highlands CBC on December 15, I've been meaning to return to the area for a couple reasons. One is that I had a large owl near my camping spot along the Corral Nuevo road that may have been a Long-eared Owl, and I wanted to look for one there using my iPod and with flashlight ready at hand. Another is that there are still several canyons in the circle that I'm not familiar with — Bartolo Canyon being my target on this trip.

The owling was only partially successful. There were actively calling Great Horned and Western Screech, but no Long-eared. It was colder than I was prepared for (upper 20's °F), and my iPod's battery seems to be bad, giving out after only a few minutes of playback. So after looking for from 4:30-5:15 a.m. this morning, I returned to my warm sleeping bag and slept until 8:00.

Bartolo Canyon, which flows north from Ruby Road into Arivaca Lake (the lower stretch is called Cedar Canyon) is a remote area that no one covered on the CBC, so using coordinates that I gleaned from Google Earth, I created a route on my GPS that took me to the base of Bartolo Mountain, pictured in the panoramic above (click on any of the photos to see the full-sized photo).

I did the hike today, the whole route being 6.5 miles and taking a very leisurely 6 hours. I parked 1/2 mile south of Ruby Road on FR 4178, hiked east down into upper Bartolo Canyon, down the drainage to about 3.6 miles, and then came back via a side canyon that is only a little smaller than Bartolo and approached the car from the west.

The birding was great – I was able to bring in mixed flocks by pishing and imitating owls at nearly every stop where there was a nice patch of oak-juniper-pinyon woodland. I kept track of the numbers of all the birds I saw, eventually tallying 45 species. The best birds were two Black-headed Grosbeaks in a fabulous mixed flock that also had at least one Hepatic Tanager, a Painted Redstart, and 5 Red-naped Sapsuckers. Other bird highlights were a Golden Eagle, 10 Montezuma Quail, 36 Mountain Bluebirds, 15 Townsend's Solitaires, 4 Black-throated Gray Warblers, 5 Townsend's Warblers, 7 Hepatic Tanagers, and 2 male Scott's Orioles.

This Striped Skunk was wandering about in the broad daylight. 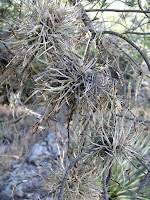 I also noticed some interesting plants. This Tillandsia recurvata (Small Ballmoss) is the only bromeliad that reaches Arizona, and it is found in only a very few canyons near the international border. (There are an additional 14 species of Tillandsia in the United States, mostly in Florida, and the well-known Spanish Moss, T. usneoides, is the most widespread.) Same family as pineapple (Bromeliaceae)! 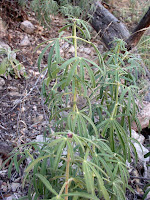 This cool plant is Mexican Orange, Choisya dumosa var. mollis. It is in the same family as citrus (Rutaceae), and this particular variety is endemic to a very few canyons in these mountains. 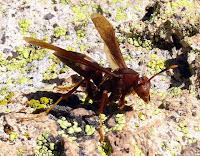 Given that it has been dipping into the 20's regularly here, it was a bit surprising to find activity among the invertebrates. In addition to a dragonfly (Variegated Meadowhawk), I spotted this wasp (Polistes sp.)

and five species of butterflies, including this Lyside Sulphur, not a common sight in January. The other butterflies were Cloudless Sulphur, Sleepy Orange, Mourning Cloak, and Red Admiral (hilltopping!).


Here are some more views of the habitat in this area. In the last photo, the view is to the NW, with Baboquivari Peak visible at the far left. 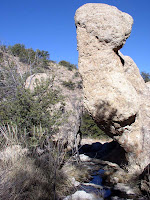 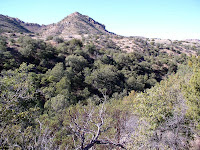