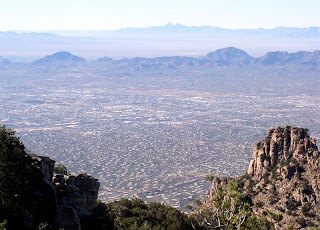 I used this CBC as an excuse for a lower body workout, hiking up to the highest elevation areas of the circle, which is largely urban. The five miles from the trailhead to Mt. Kimball cover 4155 feet of elevation change, so there was quite a bit of muscle burn going on. I began at 6:30 (well before light) at the Finger Rock Canyon trailhead and finished by hiking down Pima Canyon and meeting up with the team that covered that area to get a ride back to my friend's car. It was a total of 12.7 miles, but only about 2.8 were actually in my area of the circle, the first and last stretches being in areas counted by other teams (and some of the upper parts of the trail outside the circle). These mountains are incredibly steep, and the habitat ranged from saguaro forest to dense pinyon-juniper woodland and even some Ponderosa Pine in the protected slopes. It has been a horrible winter for high-elevation/northerly irruptives (no White-winged Crossbills here!), but even then I had the only Western Bluebirds, White-breasted Nuthatches, Mexican Jays, and Yellow-eyed Junco for the count. In a good year, this area will have 10-20 scoops, and previous compilers have done nothing to make sure it gets covered. It does take someone crazy, like me, I admit. The most fabulous bird found on the count, by Chris McCreedy, was a Blackburnian Warbler, the first winter record in the state and the interior West, and one of probably fewer than 10 for the whole country. It's still there in the willows on the Santa Cruz "river" (sewage outflow; the river died 40 years ago), being seen daily by birders. A Rose-breasted Grosbeak was also great find on the count, and a Summer Tanager and Orchard Oriole were stakeouts. I departed very early the next morning for California, barely with any energy remaining to pack.
Posted by Birdernaturalist at 8:27 AM