Jim and I skipped the Pinnacles countdown (I only would have given the compilers a hard time, anyway) and drove to Monterey, crashing at our friend Brian Sullivan's place. For this CBC Jim and I covered the Carmel River mouth and beach, areas to the south of the river, and parts of Carmel itself. We were joined by my friend Beth Russell for part of the day. What a contrast to the previous day's CBC! We had 106 species in our area alone, and the count had a total of 197, a near record high. Our best birds were Swainson's Hawk (probably a third record for the count), Wilson's Warbler, and "Western" Flycatcher. The best bird on the count was a male Archilochus, probably a Ruby-throated Hummingbird, found by Will Russell. It was feeding high in a eucalyptus and being chased by Anna's Hummingbirds, and as far as I can tell has not been relocated. Other goodies were Bullock's and Baltimore Orioles and Rose-breasted Grosbeak. Frustrating was having to book my frequent-flier flights in early September, before most CBC's had announced their dates. Otherwise, I would have stayed on a couple days and done the San Francisco and Moss Landing CBC's.

Friends Jim Tiezt and Matt Brady after the countdown 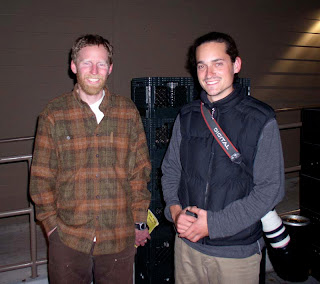 Posted by Birdernaturalist at 9:16 AM