I enjoyed two weeks in Oregon in late November. My first agenda item was to give the talk at the Audubon Society of Corvallis monthly meeting, which was titled: Putting it All Together. It's how I incorporate all aspects of natural history into my birding tours, such as butterflies & birds, plants and birds, as well as bugs, snakes, mammals, etc.

Then I went birding with friends to Mary's Peak and the southern Oregon coast.

Mary's Peak at dawn was gorgeous. At 4097 feet, it's the highest point in Oregon's Coast Range and forms the dominant feature in the skyline west of Corvallis, my home town. I was there with my friends Randy and Gislain. Few birds, though. Before and after our visit others saw Gray-crowned Rosy-Finches here. 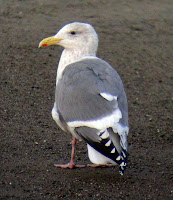 On the south coast at Bandon, I birded with Alan Contreras, joined one day by Dave Lauten and Kathy Castelein. One of the puzzling birds was this gull, which seemed to have too much black in the wings for Thayer's and might have best fit a Vega Herring Gull. 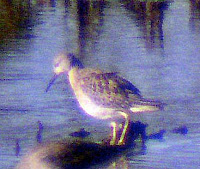 This Ruff was near Coos Bay. Alan and I found it at the same time while scanning a flock of Long-billed Dowitchers and Greater Yellowlegs. Alan spotted two Lesser Yellowlegs in the same flock. 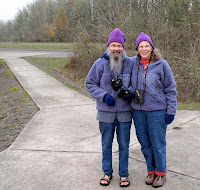 While in Corvallis I also went birding with friends Rob & Eve Gill. Here they are on a chilly afternoon at Finley National Wildlife Refuge, where we watched a Virginia Rail run through the rushes and into a rose bush like a rat.

Thanksgiving dinner at my sister Stacy's was a delicious affair. Her husband Brad brined the turkey in apple juice and roasted it in a spit grill in the back yard. It was the best turkey I have ever eaten. Here is the cast of feasters: 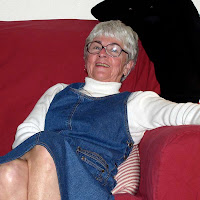 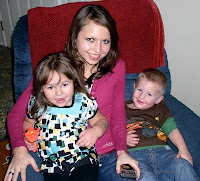 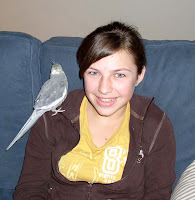 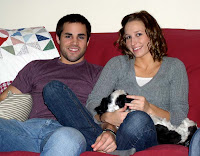 Niece Jamie with her boyfriend 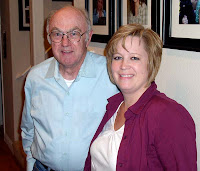 Dad with sister Stacy
Posted by Birdernaturalist at 9:51 AM