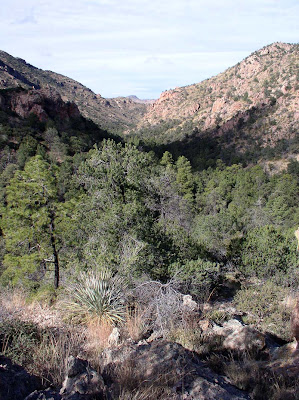 This is probably the sexiest and most brilliantly designed circle in the state, started in 1960 by Bill Harrison. I compiled this count this year with Jake Mohlmann. It was last done in 2001, so there is an unfortunate gap of 6 years in the data.

In the previous 4 weeks I put a lot of work into designing well-defined areas, providing area leaders with good maps and birding information, and recruited like a maniac. I also paid 4 visits to the circle to learn more about areas that were unknown to me.

The center of the circle is located exactly 57.14 miles SSW of my house in Tucson, which places it west of I-19 and to the NW of Nogales. It actually overlaps the Nogales CBC circle by 0.8 of a mile. It incorporates Peña Blanca Lake in the SE (by a mere 1/2 mile) and Arivaca Lake in the NW (by a mere 1 mile); all of Sycamore Canyon, California Gulch, and associated drainages (encompassing the entire known breeding range of Five-striped Sparrow in the country); and all of the Atascosa and Pajarito Mountains. There is 1/2 mile of paved road in the circle, one decent dirt road that cuts through the center (Ruby Road), and miles of rugged tracks that require high clearance. There are probably fewer than 5 residences and no bird feeders in the circle. There are at least two Jaguars that are known to roam this area, as well as a fair amount of illegal border crossing activity. There are no Rock Pigeons. Most participants had to drive at least an hour and a half just to get to the circle (and we had participants as far away as Flagstaff and Paso Robles, CA).

I covered an area unknown to birders called Pine Canyon (pictured at the top). It was a two-mile hike just to get to the start of the canyon, and it has the only tall pines in the circle (Chihuahuan Pine), another mile and a half up the canyon. It apparently had been covered years ago only twice by a Forest Service employee who was known as "the mountain goat" and said to be partly crazy. None of the previous compilers had ever been there. It was fabulous. I added Olive Warbler to the all-time list, had the only Fox Sparrow (Slate-colored) and Cassin's Vireo, and was constantly working over Bridled Titmouse/Kinglet/Bushtit/Hutton's Vireo flocks with my birding partner, Sarah. One flock had four Townsend's Warblers in it, virtually unheard of here in such numbers in winter, but that was to be a theme in many of the areas. We saw four Hepatic Tanagers and a Painted Redstart for additional color. I also started the day owling (having camped near the start of my area after doing the Patagonia CBC yesterday), adding Short-eared Owl and Whiskered Screech-Owl to the all-time list. (The latter should have been had in previous years, as it is common, but 34 counts since 1960 failed to make any special owling efforts. This year, three teams had the species.)

Rarities found by other teams during the day include Brown Pelican, Hooded Merganser, Greater Scaup, Eastern Phoebe (amazingly, none of the 3 that were found prior to count day were located, so there were 4 known to be in the circle), Western Tanager, Black-capped Gnatcatcher, and Red-breasted Sapsucker. At least as exciting were the high counts obtained for many species. We likely had high counts in the nation for 12 or more species this year, five of which were all-time highs. These five were Hepatic Tanager (27), Scott's Oriole (29), Montezuma Quail (268), Elegant Trogon (4), and Painted Redstart (14). Other birds that were possible highs for the year were Gray Flycatcher (59), Hammond's Flycatcher (26), Ash-throated Flycatcher (16), Black-throated Gray Warbler (31), Mexican Jay (321), Rock Wren (147), Canyon Wren (125), Rufous-crowned Sparrow (244), Five-striped Sparrow (1), Arizona Woodpecker (37), and Bridled Titmouse (216). This circle competes with Patagonia, Nogales, Ramsey Canyon, and Portal for some of these counts. We won't know the final winners for a few months.

A view of the Hells Gate area in Peck Canyon, on the way to Pine Canyon

During a break on our cross-country route back out of Pine Canyon
Posted by Birdernaturalist at 8:24 AM