I did this CBC last year as well, covering a 2-mile stretch of the San Pedro River south of Winkleman. This CBC is famous for its formerly resident Streak-backed Orioles and first state record of Carolina Wren. As on other southern Arizona CBC's, numbers of sparrows were low, with the notable exception of Lincoln's Sparrows, which are in near record high numbers. The best bird in the area that I covered with Morgan Jackson and a couple from Phoenix was a Golden-crowned Sparrow that I found, but the Sandhill Crane flock that was tallied by three teams in addition to ours was very unexpected. The count had a near record-low species count of about 102 despite good coverage and great weather. Average is about 120; the lack of high elevation/northerly irruptives really killed the total. The only other highlight I can think of was a Black-and-white Warbler. Morgan and I finished early so we could drive 6 miles outside the circle to chase a White-winged Scoter that had been found the previous day. 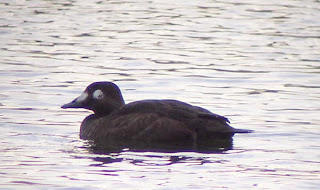 Posted by Birdernaturalist at 9:18 AM