On nearly all of the birding tours I lead for WINGS I try to identify any butterflies we stumble across. They definitely come second if there’s a good bird nearby, but in Jamaica this year, not only was everyone able to get on every bird almost immediately (it was a small group and all were very experienced and skilled with their binoculars), they were also all very interested in seeing butterflies and other critters.

We were able to tally an impressive 36 species of butterflies and skippers, and I actually had time to photograph a few. (As an aside, I should mention that I occasionally do lead tours that specifically target butterfly watching, and will put a plug here for my upcoming Butterflies & Birds of the Kosñipata Valley of the Manu region of SE Peru. I’m co-leading it with Jim Brock, co-author of Butterflies of North America with Kenn Kaufman, and this will be my 9th or 10th such tour with Jim, but our first to Peru together – we've each been there several times. There are only three spaces left on this tour.)

The butterfly at the top is a Pan Hairstreak, Electrostrymon pan, one of the few Jamaican endemics that doesn’t start with “Jamaica.” There are several other endemic hairstreaks in Jamaica, but most of them are barely known and seldom seen – the biggest gap in my personal list of butterflies for the island. We saw one dash by that was bright blue above, but it never landed.

This Mimosa Yellow, Pyrisitia nise is only one of two species I photographed that isn’t an endemic subspecies or species. 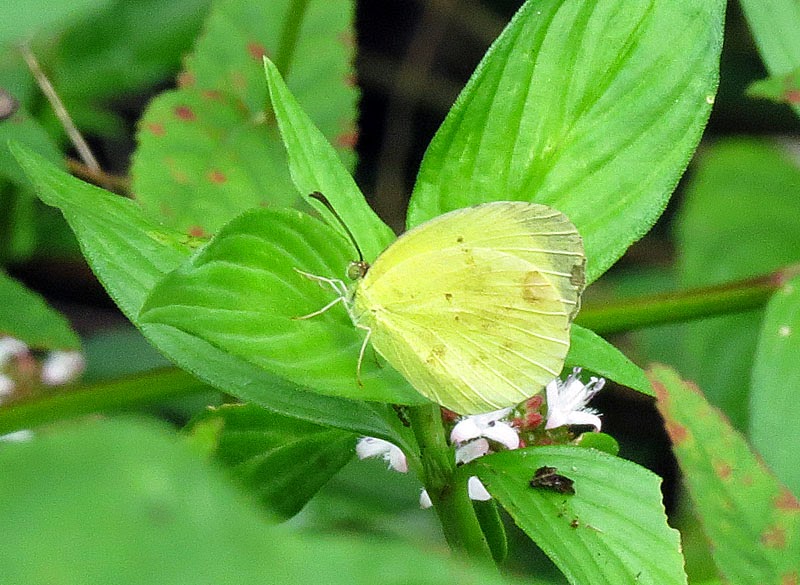 The other is the Cassius Blue, Leptotes cassius, a very common butterfly in all habitats. I’m always looking through the blues to find one of the endemics, and we did see one Perkins’s Blue, but I didn't manage to get a photo. 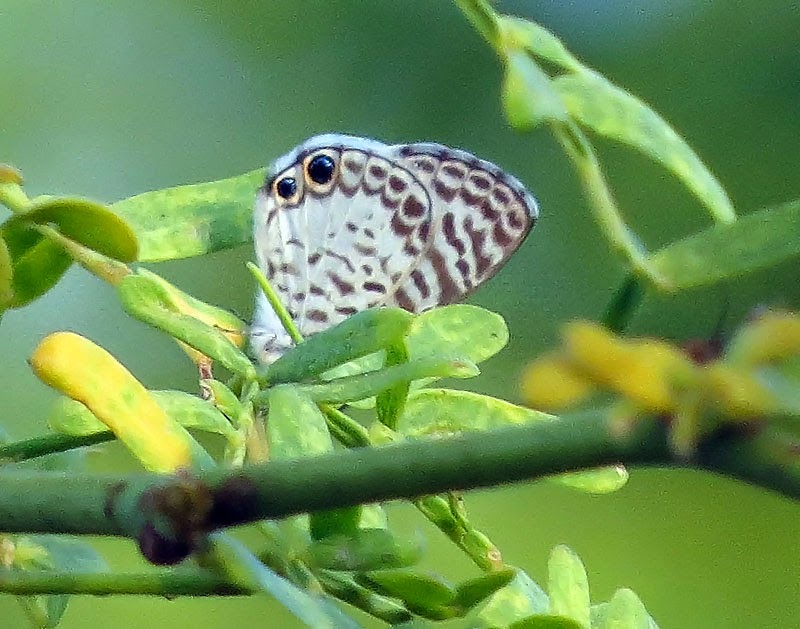 Everything else here is either shows the scientific trinomial to indicate that it’s an endemic subspecies or is a unique species to the island. 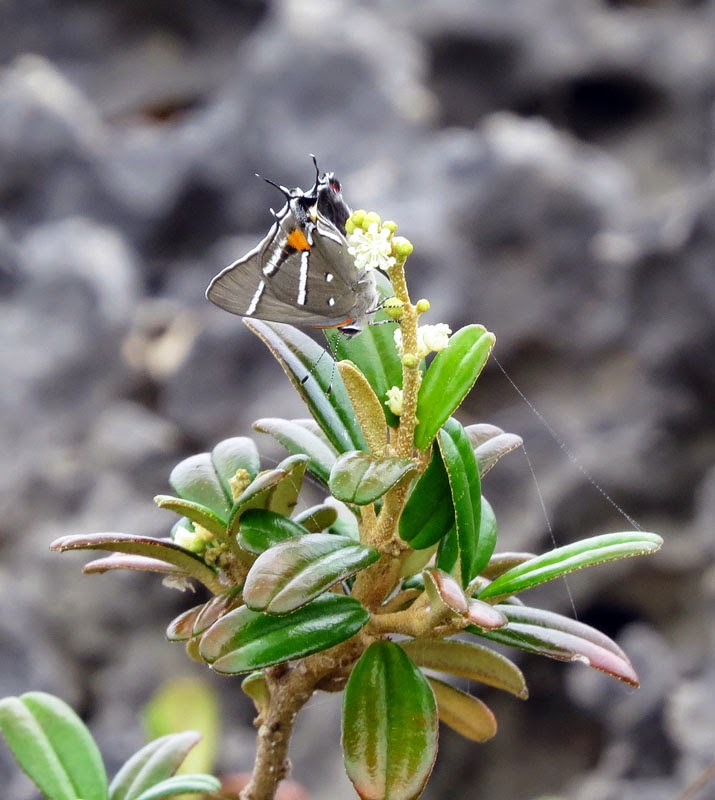 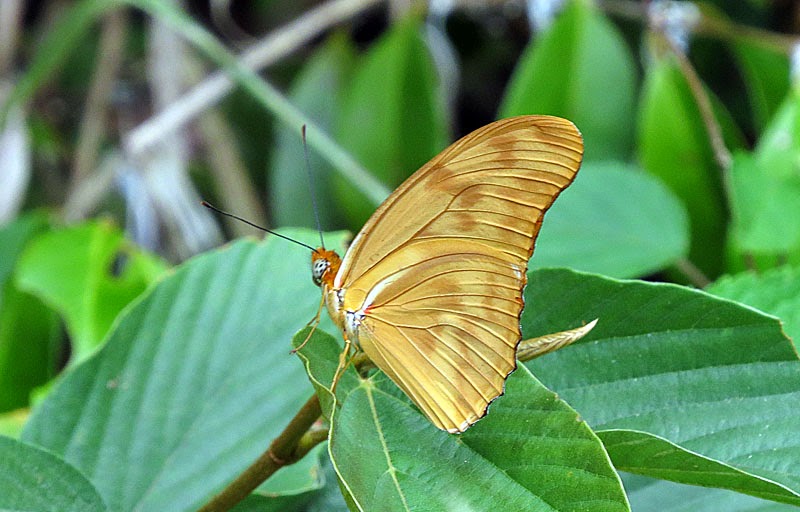 Zebra Heliconian, Heliconius charithonia simulator is also a very common butterfly island-wide, but photos are hard as they hardly ever sit still.

We were very lucky to see this Tailed Cecropion, Historis acheronta cadmus in the Cockpit Country. 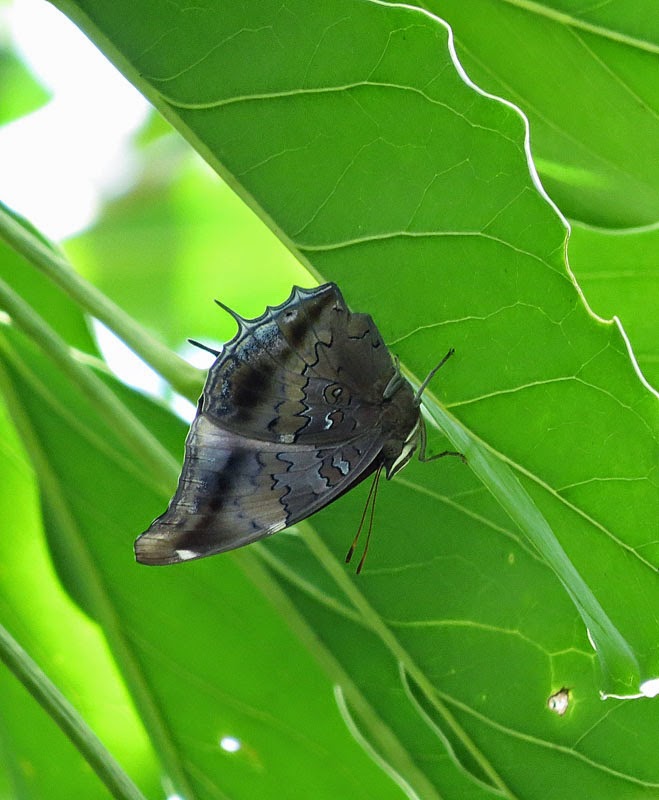 Marshall’s Pen is one of the best places to see the distinctive Jamaican Mestra, Mestra dorcas, and we had a few at Rocklands Bird Sanctuary too. 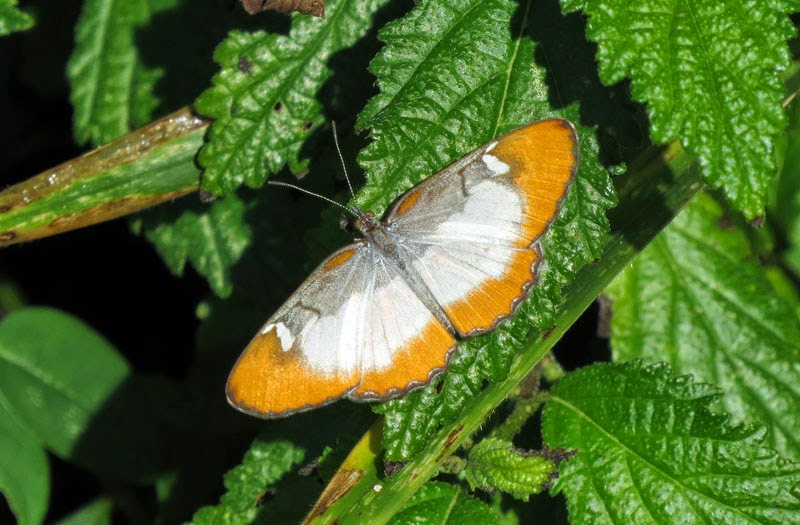 Can’t see it? I didn’t see this Malachite, Siproeta stelenes stelenes until I flushed it, showing its bright green upper side. Unlike the others we saw, this one landed and waited for at least a poor photo. 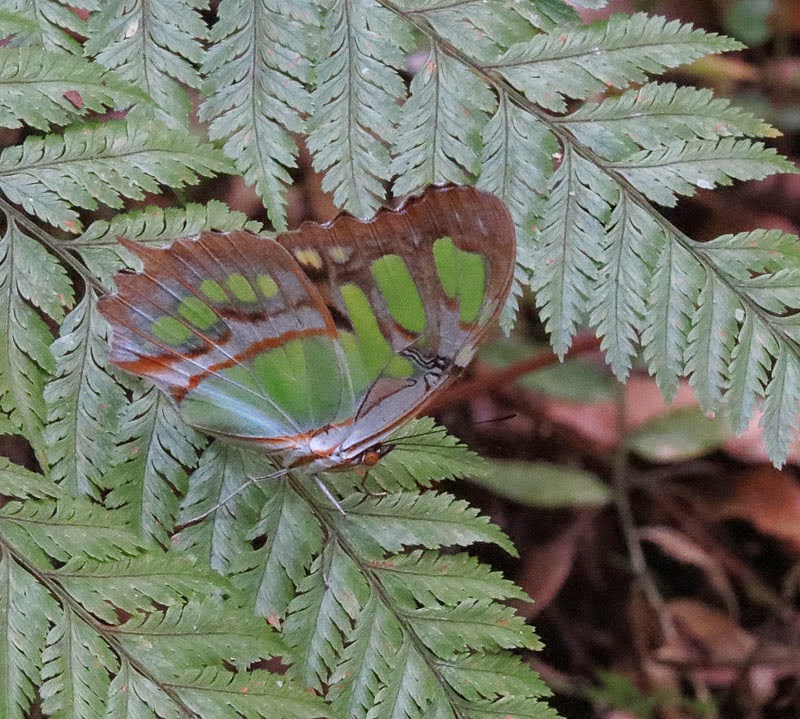 The satyr genus Calisto is endemic to the Caribbean, with nearly all of the 41 species found on Hispaniola. Cuba has a few species, a couple are in the Bahamas, and single species are present on Jamaica, Puerto Rico, and Anegada in the British Virgin Islands. Jamaican Calisto, Calisto zangis almost surely derives from a colonization of vagrants from either Cuba or Hispaniola. 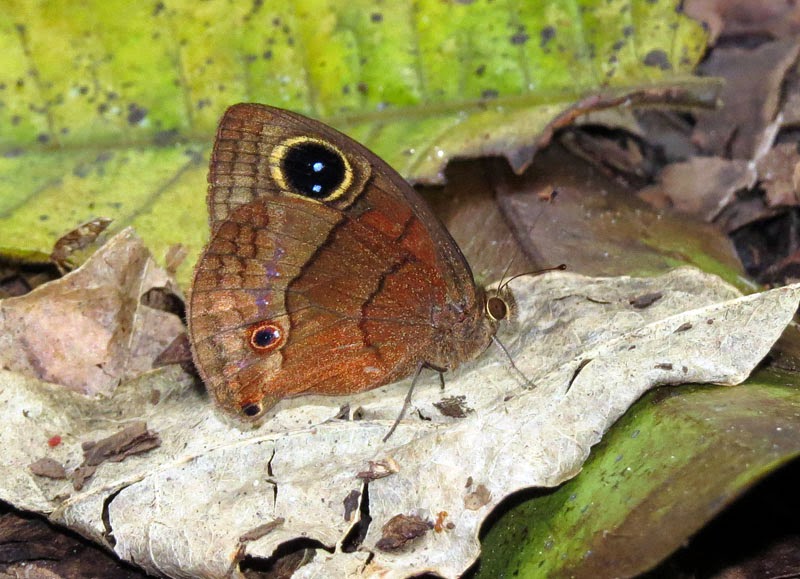 This is the widespread Long-tailed Skipper, Urbanus proteus domingo. 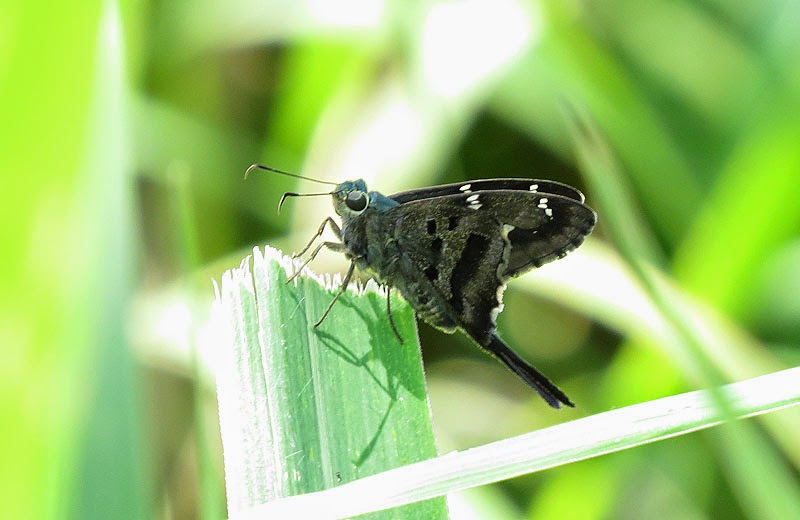 A weedy species of almost any grassy area is the Jamaican Broken-dash, Wallengrenia vesuria. Thankfully, it’s pretty much the only little orange skipper you have to worry about here. 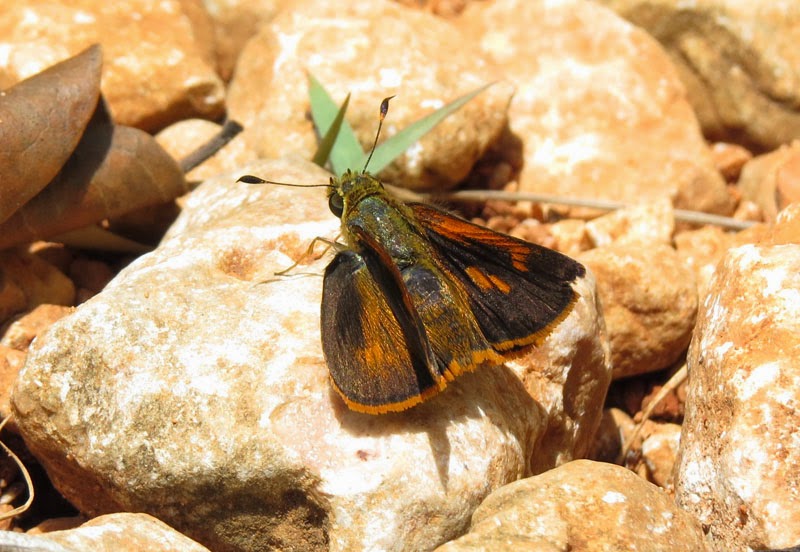 Jamaican Flasher, Astraptes jaira is one of the few species of flashers that don’t flash any white or yellow at all. 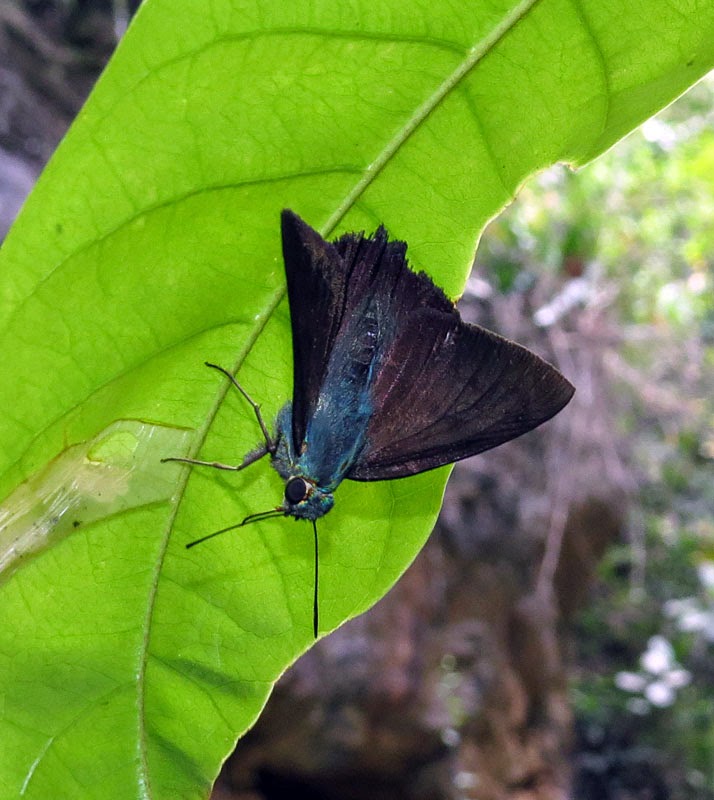 This Jamaican Silverdrop, Epargyreus antaeus was in the Cockpit Country, and we saw another at Marshall’s Pen. 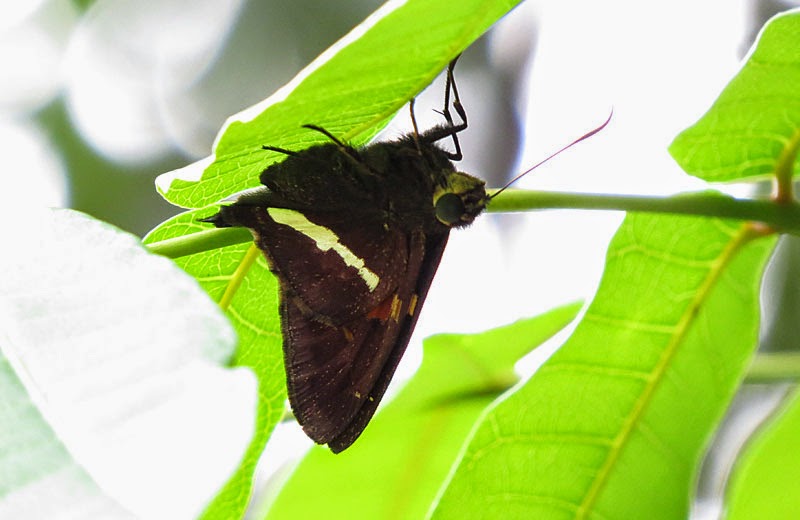 It might surprise you that April is not the best time of year for butterflies in Jamaica; numbers are actually quite low, and many are tattered. Some day I hope to come to Jamaica after the summer heat and rains have allowed the plants’ lush growth to bring butterfly numbers to their annual peak –perhaps July to October – and maybe target some of those endemic hairstreaks.

Keeping up with this theme of bugs, I’ll show some moths in the next blog.
Posted by Birdernaturalist at 8:00 PM