The fourth World Birding Rally Perú has come to an end. We’re all exhausted but at the same time elated and so grateful to the country of Peru for having invited us to take part in this amazing event.
(P.S. an apology for not posting this last night, but the internet was down until I finally got the gumption to ask the receptionist to reset the router; now it works beautifully.)

The event was a huge operation that is hard to comprehend. Each team had its own van and two drivers, and each morning when we departed at 5:00 a.m., our vans were fully stocked with drinks, snacks, and sack lunches. Though each team mostly went its own way, we all had to end up at the hotel and turn in our list each evening on time (or face a penalty, of, say an hour later start than everyone else the next day, a punishment that was meted out once to another team for not having shown up on time to a reception put on by a small community). The hotels were all extremely prepared, and we were always accompanied by a huge entourage of journalists, photographers, support staff, an ambulance staffed with medics, and sometimes regional police escort (for a show of support I presume, as there wasn't a safety issue anywhere along our route). This is the group at last night's awards ceremony, anxiously awaiting the results. 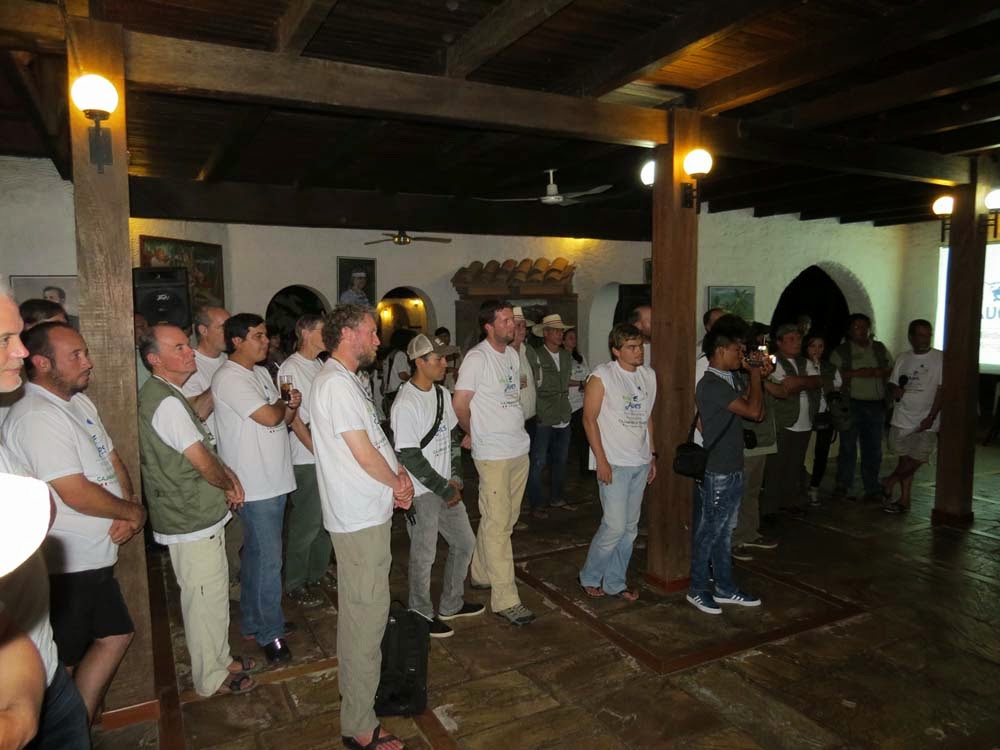 Manuel Bryce, who goes by Mañuco, is the man who pieced it all together like a magician, and this evening he announced the final list results: Our Sunbird/WINGS tour came in first place with 588 species seen in 8 long days of intense birding. What a blast we had. 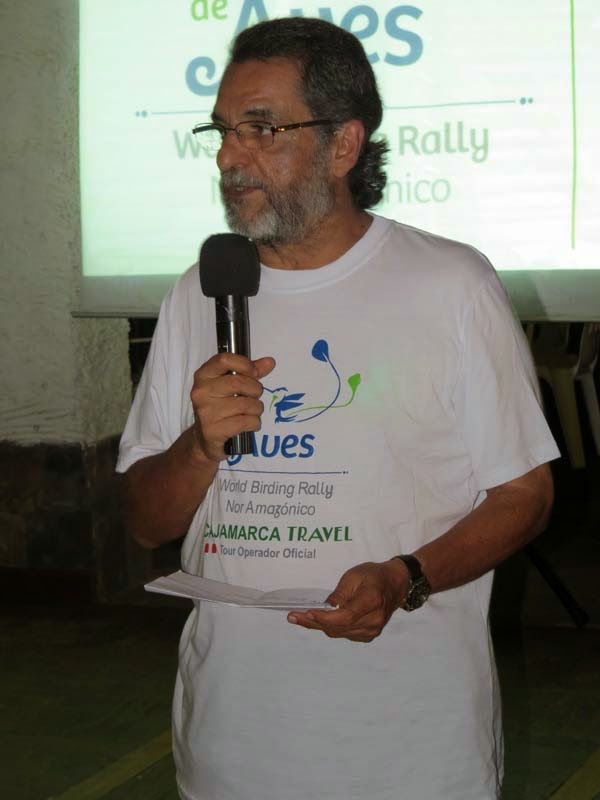 Some photo highlights from the past two days follow. The suggested itinerary for the next-to-last day, starting at our hotel in Tarapoto, was the dry Upaquihua Valley in the morning, followed by the ferry ride over the Huallaga River and birding on the ground of our next lodge, Lago Lindo. Our team strategized and headed instead up the mountain road directly behind our Puerto Palmeras hotel in Tarapoto called the Escalera, or to birders as the Tunnel Road, the suggested itinerary for the last morning. This is a view of the valley on the other side of the tunnel. 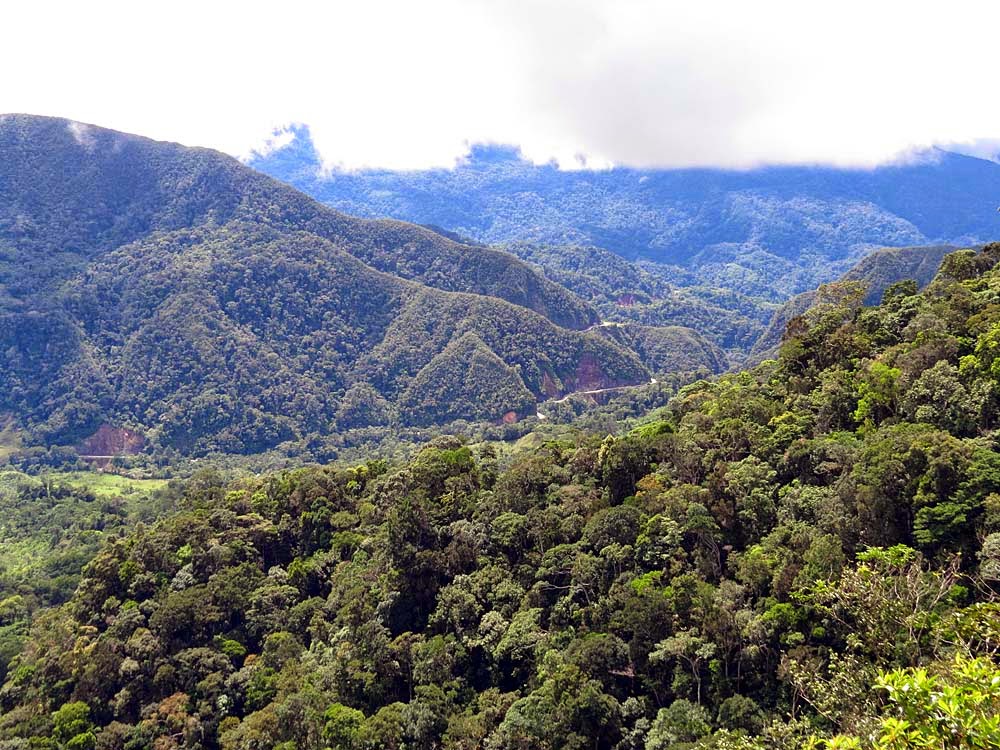 On the stunted ridge forests in this area is the very rare and enigmatic Plumbeous Euphonia, and we’re grateful to Dan Lane and his rally team last year for providing everyone with the location and recordings. (And we're lucky Dan and his group weren't competing this year; they had over 50 more species than we ended up with!) 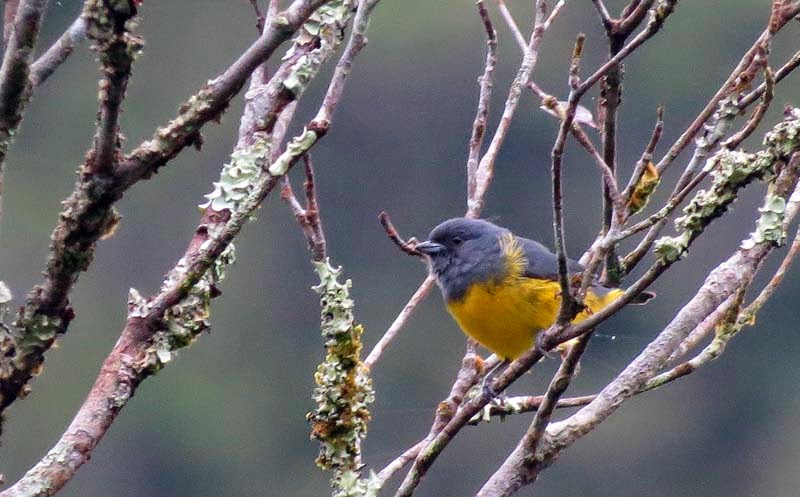 We finally found a mixed flock after seeing very few new birds all morning, and in it was this cooperative Ocellated Woodcreeper, as well as my lifer Black-throated Brilliant, a scarce and enigmatic hummingbird. 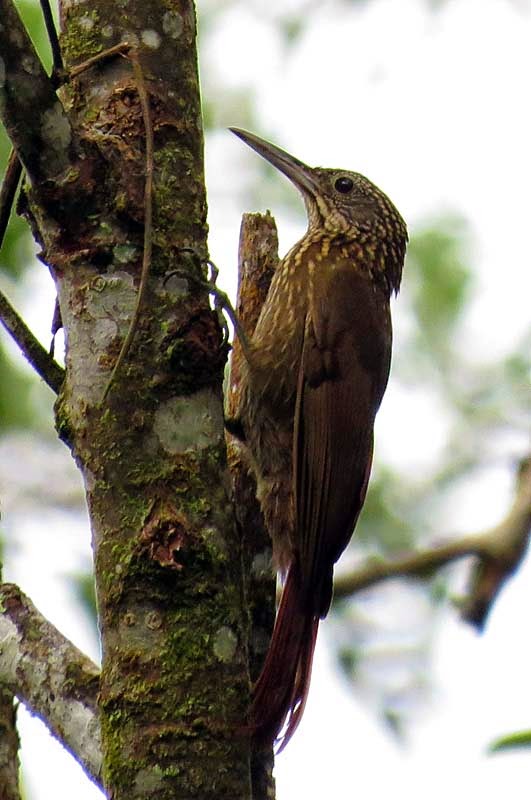 We then spent the afternoon in the Upaquihua Valley, where I had taken my tour group this past February. In just a couple hours we managed to find all but four of the local specialties here, such as Ashy-headed Greenlet, Rufous Casiornis, and Sulphur-bellied Tyrant-Manakin. We then finished the day on the east side of the Huallaga River, birding the entrance road to our next lodge, where Hoatzins and a calling Common Potoo greeted us at the lake. At the end of this day, we retained the lead by a margin of about 15 species, with 81 new ones for the day and 560 total.

We had another very early start so that groups could leave here and drive to the Escalera, but the South African team and we had a similar idea and instead spent most of the morning birding the lush Amazonian-flavored forest in the valley where Lago Lindo is located. It’s hilly, but still quite low, so it has a very odd mix of species, such as Wattled Guan and Screaming Piha.

We dipped on mixed flocks, but we slowly added quite a few very nice birds to our list, such as Golden-collared Toucanet, Yellow-billed Nunbird, and Red-billed Tyrannulet (which I hadn’t seen since 1992 in SE Ecuador, if, indeed I had identified correctly back then, which is doubtful).

This White Hawk was an exciting surprise as it flew in front of the car and landed right above us. (We had a great driver from the hotel, Oswaldo, who was very responsive to our screams and panics.) 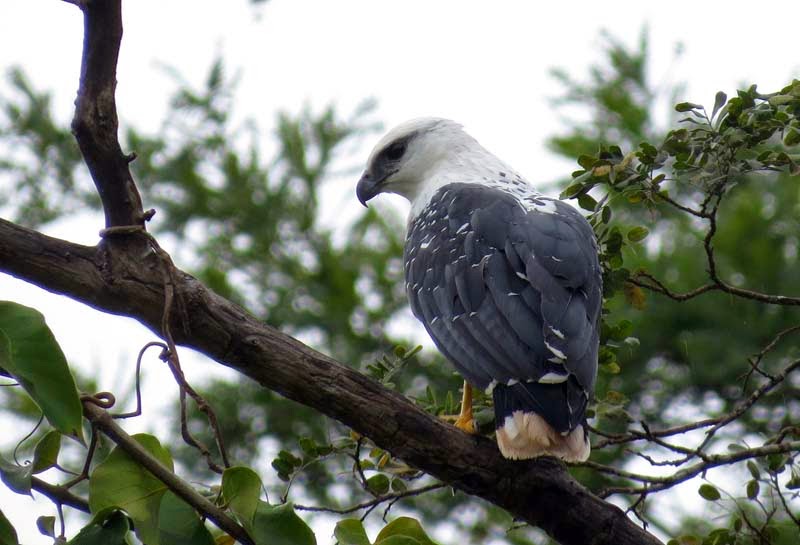 I had to take time to get photos of this tiny, fascinating Limacodid caterpillar. I also noticed the tiny orange ants that probably garnished honeydew from it and nectar from the nearby flowers. 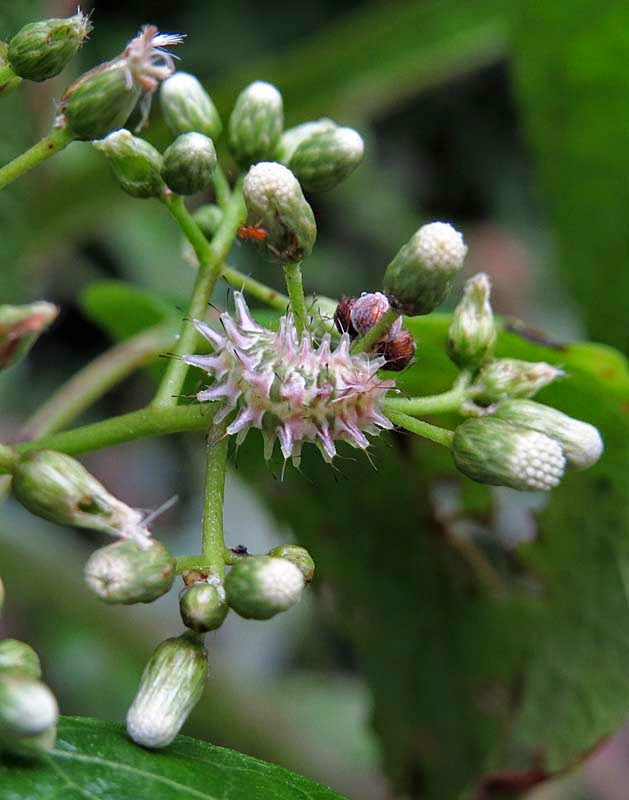 This photo shows Paul next to a cliff where, with Jake’s mentioning of seeing a swift pass by him at knee-level, I looked up and found a nest. Look in the upper left. 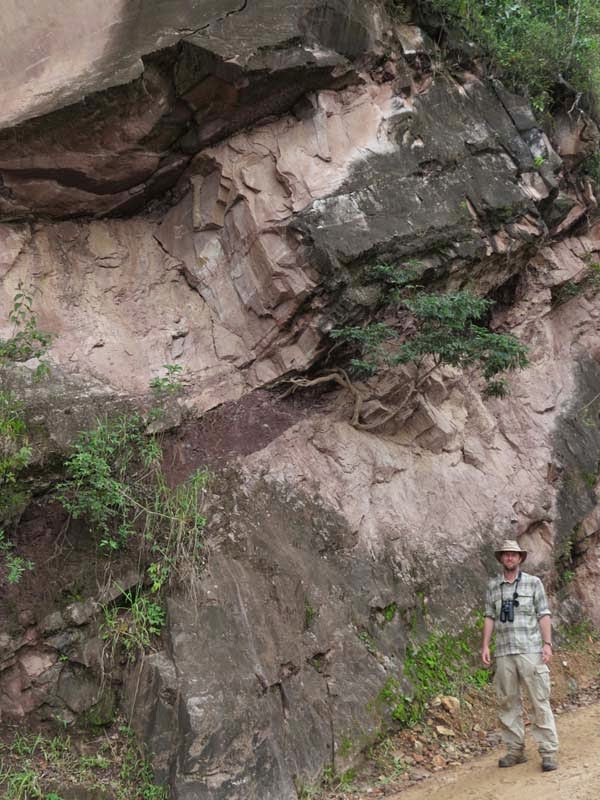 Here is a classic nest of a Lesser Swallow-tailed Swift, a fascinating meter-long tube of Ceiba seed down (kapok), with the entrance at the bottom. I had only seen two of these before, once on a building at the Umbrellabird Lodge in southwestern Ecuador and another on the side of a huge Ceiba tree on the Osa Peninsula in Costa Rica. This one was by far the most spectacular. 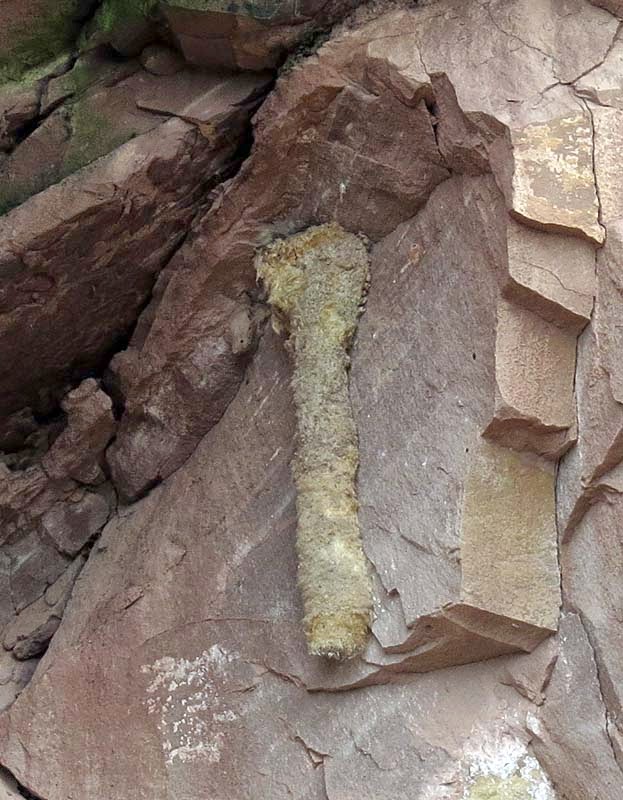 We had to turn in our lists to the judges by 1:30, so we arrived at the hotel back in Tarapoto well in time to account for contingencies. There were no holdups, so this gave us a chance to wander the grounds, where we added our final two species, first this Crowned Slaty Flycatcher, and finally a Black-crowned Tityra by the reception. Incidentally, even though the genus was changed to the shorter Empidonomus from Griseotyrannus a few years ago, this flycatcher still retains the longest scientific name of any bird, with 32 letters in the lead by two. Care to guess which four species come in second place with 30 letters in their names? 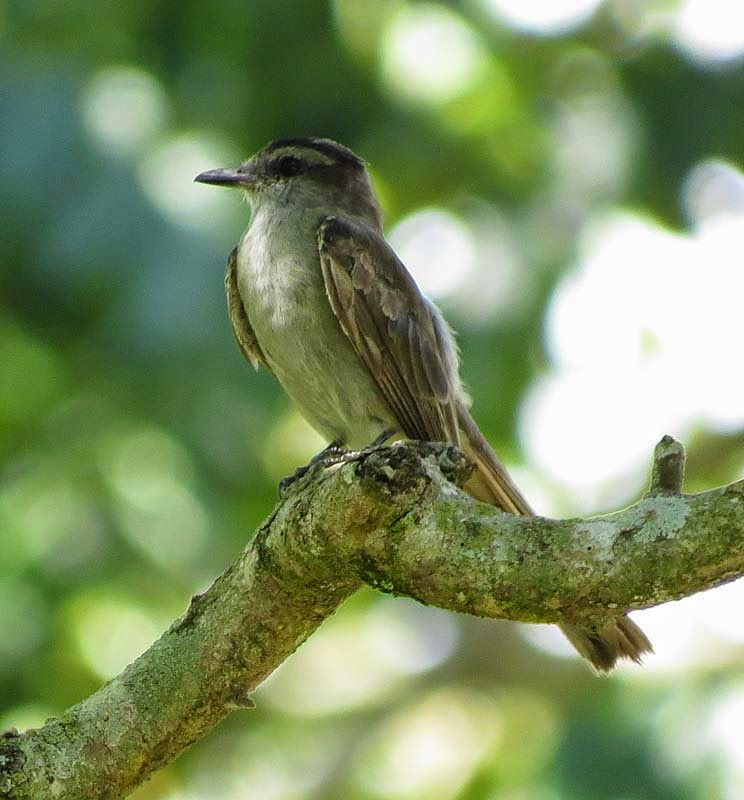 The award ceremony was a huge affair, with the very gracious Vice-minister of Tourism of the federal government present (in the center below), as well as other dignitaries from the local governments. 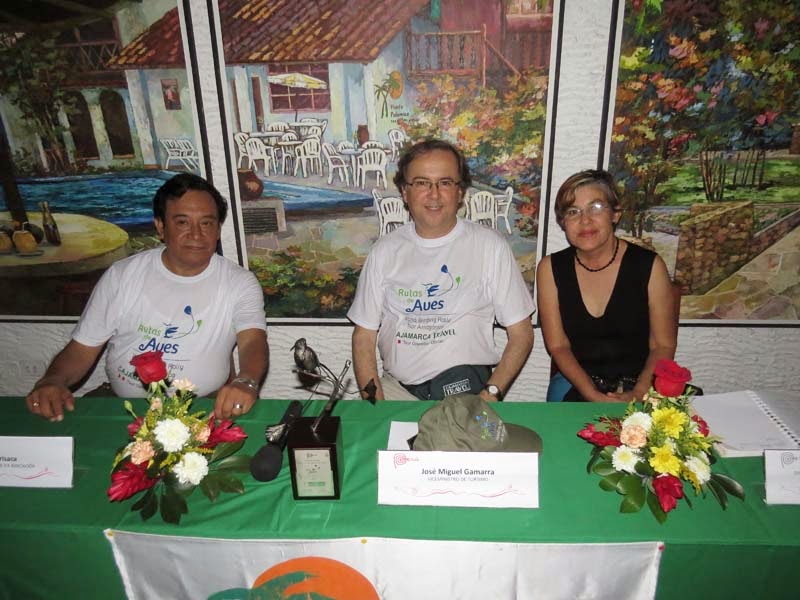 After eight long days in the field together, smelly, and irritable from lack of sleep (and my having been down with a cold and downright sick for two days), we should have been at each others’ throats, but I had an amazing time with my teammates and am grateful to all of them.

Gustavo Bautista, our local guide from Cusco. Charming, super energetic, an eager learner, and very sharp ears. He guides for Manu Expeditions and is great fun to be with. 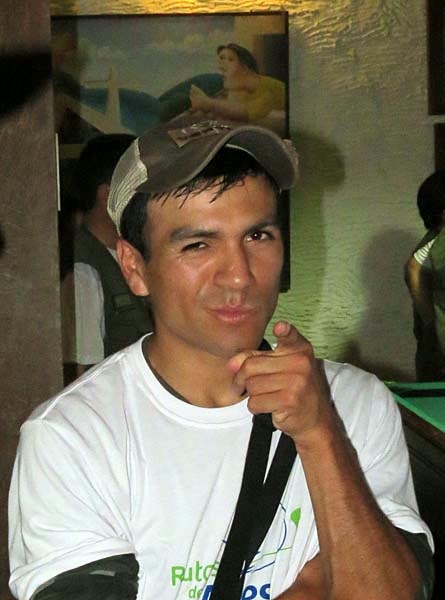 Steve Howell, wicked humor, razor-sharp ID skills, and the birder I have learned the most from. We were all very lucky to bird with him. 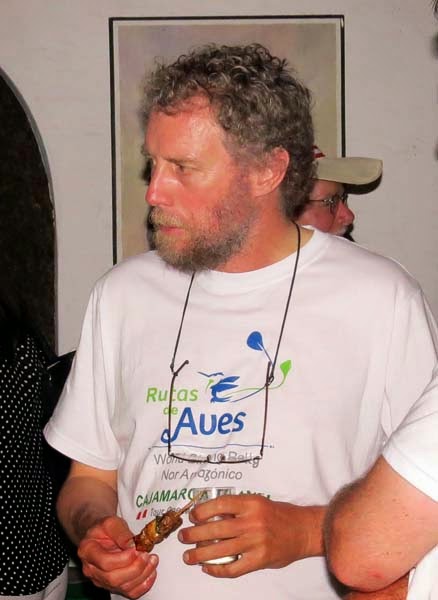 Jake Mohlmann, the nicest guy you could ever go birding with, and a very fast learner. You would have never known that this was his first time to the South American tropics, and that he never flinched at our having to move on after only hearing birds. 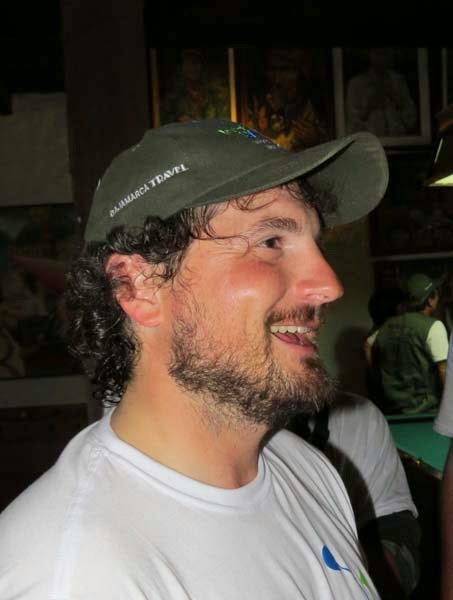 Paul French, with the sharpest eyes of the group, always cheerful, a fun guy to bird with, and like Jake a fast learner who didn’t stress about having to walk away from so many lifers (this was his first trip to South America). He saw 449 lifebirds on the trip and has a newly-found desire to return to Peru. I'm tempted to think of ways to sneak on his future Azerbaijan tour. 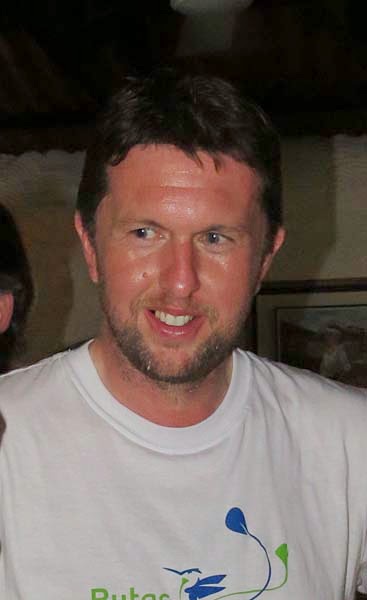 Posted by Birdernaturalist at 6:14 AM