Jamaica is awash in beautiful, endemic plants. One could easily do a botanizing tour here for a week and completely ignore the birds and bugs (I couldn’t, but I’m sure there are those who could).

In the coastal lowlands you’re more likely to find widespread tropical species that disperse well, such as this Bellyache Bush, Jatropha gossypiifolia. We have jatrophas in Arizona, so recognizing the genus was easy.

This Mexican Primrose-willow, Ludwigia octovalvis is very common along the roadsides at Ecclesdown. It might be introduced (a lot of plants are brought in accidentally or escape cultivation in tropical areas), but members of the evening-primrose family Onagraceae are known to have seeds capable of log-distance dispersal on wind.

This strange, epiphytic Mistletoe Cactus, Rhipsalis baccifera is a member of the only genus of cactus that it natively found in the eastern hemisphere, on Africa and on various islands in the Indian Ocean. Its distribution hails from ancient times when South America and Africa were united as a single continent.

I recognized this snoutbean, Rhynchosia sp., from the species I found in Red Rock Canyon in southeastern Arizona a couple years ago. It’s a tropical vine that is known only from that one canyon.

Even though I never did get a name for this small flowering tree, I thought it was worth including in case some reader recognizes it. It was growing at Marshall’s Pen, where many of the trees and shrubs are indeed endemic. 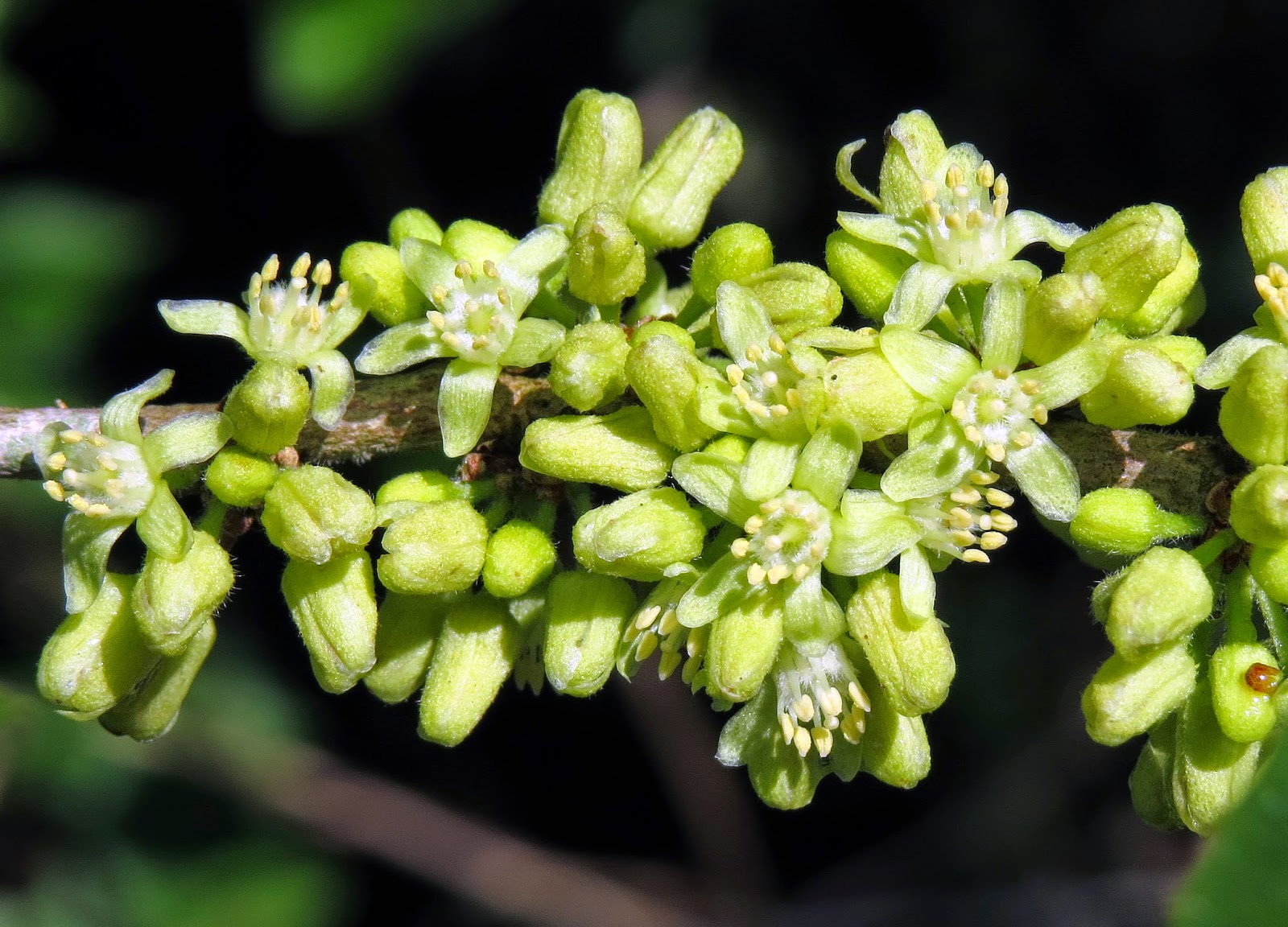 I don’t have a common name for this endemic flowering bush Brunfelsia plicata. It’s not in bloom like this every year (and in very dry years there are no flowers at all), but I sure get excited when I round the corner upon our arrival at Marshall's Pen and see it like this. Its flowers are very large with a long floral tube and white, unlike the smaller, purple brunfelsias I’ve seen in South America, but what makes this one so special is the spectacular fragrance that pours forth after darkness falls. I can smell it in the air as I walk from the great house at Marshall’s Pen to our rooms in the old coffee store, but the perfume is best if you bury your nose in it. Ann Sutton says that the extremely long flowers are pollinated by a sphinx moth, but I didn’t hang around long enough to ever see which one. 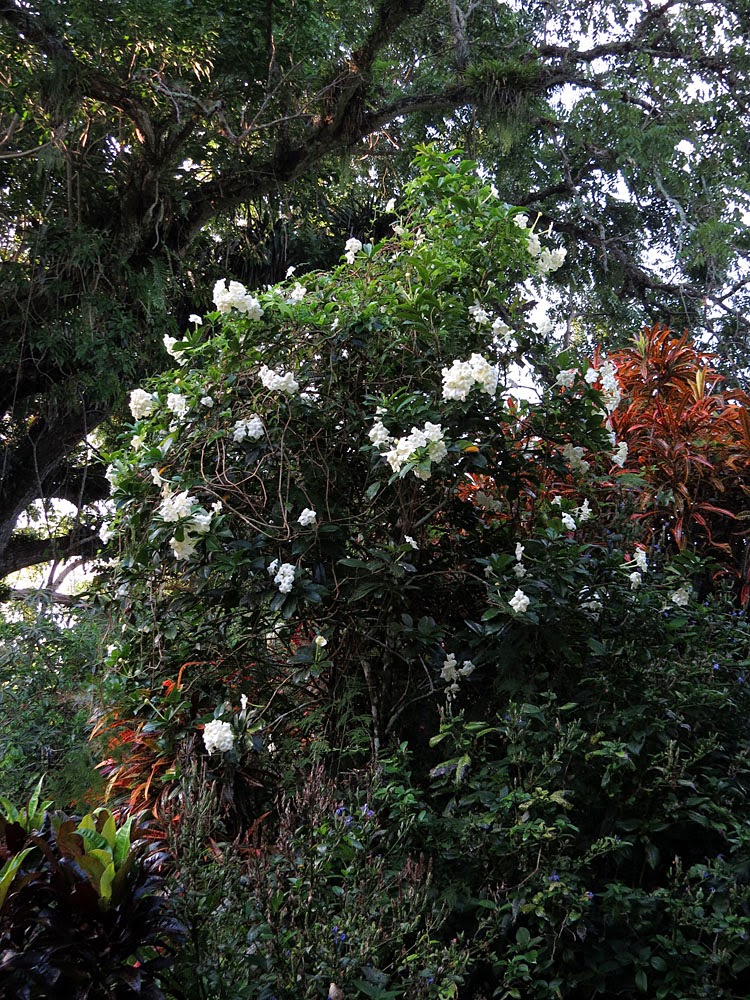 The brunfelsia is one of several plants in the gardens at Marshall’s Pen that were brought here from the Cockpit Country, an area extremely rich in endemics.

This Phyllanthus sp. is one of those endemics, which I always adore. If it were also fragrant, it would hands down be my favorite plant in Jamaica, but it is still beautiful and amazing. We were lucky to find this one in full bloom. It has no leaves, and a close-up of the flowers show that they are borne on what look like leaves but are actually modified flattened stems called phylloclades. How did I know that those aren’t leaves? Easy – flowers and leaves are basically the same thing – specialized structures produced by stems; they can’t be borne on leaves, any more than you can have an eyelash growing off your fingernail. 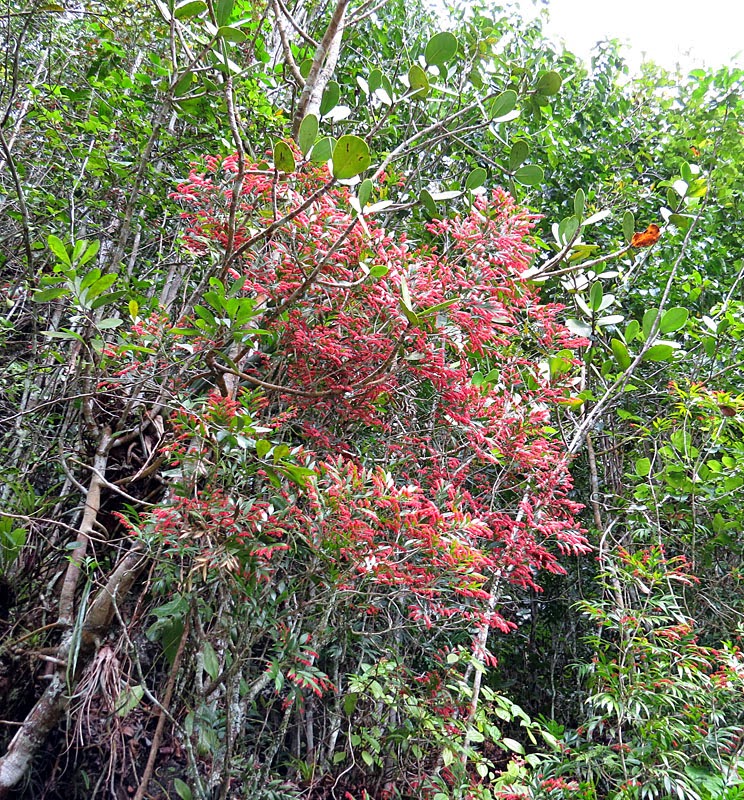 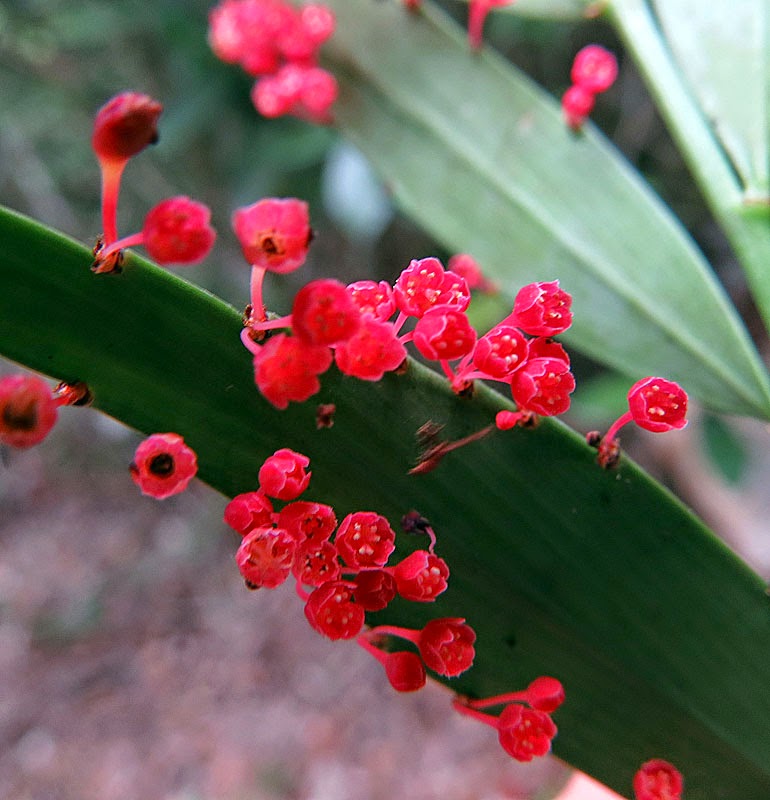 This groundsel, Senecio sp., was in the cockpit country and just by being in this area of ancient limestone stands a good chance of being endemic. I’m still waiting for someone to write a key to the Asteraceae of Jamaica.

Finally, Pink Bell Flower is one name I found for this gorgeous Portlandia coccinea, also a Cockpit Country endemic. In fact, Ann told me that the entire genus is endemic to Jamaica, and I was stunned to learn that it’s placed in the madder family, Rubiaceae. This is the family that famously includes coffee, bedstraw, and gardenia; and this plant looks nothing like any of those.

I loved the buds; I’ve often read in botanical keys the term “petals imbricate in bud,” and this is a good example of one that is not – the petals are not overlapping at all, looking more like a clever origami creation.