Some Cool Critters in Jamaica

Here are a few more photos from my Jamaica tour this past April. As I said with the butterflies, the birds were so easy this time we had plenty of time to look at whatever other cool things struck our fancy.

I’d seen this sand wasp at our Port Royal hotel every year, and I’ve never thought that it might actually be identifiable. But now with participants who were also curious, I stopped to get photos. This and several other females scattered throughout the sandy back yard were busy defending territories and occasionally landing to excavate nest burrows. I was able to send photos to Dr. John Ascher who confirmed it as Stictia signata. I had actually found a matching photo on the Discover Life website as Bembix americana, which turned out to be misidentified (they have since fixed this, since John is involved in the website; he was grateful for my accidental discovery of the error).

This presumed male (a little more colorful) hovered nearby and would occasionally engage the female in chases, presumably to mate with her. The female above wasn’t hard to photograph, but this male never did land, and it was luck that the camera finally focused on the correct plane.

Near our hotel in Port Royal, right on the bay with plenty of mangroves, were these common Seaside Dragonlets, Erythrodiplax berenice. Thanks to Dennis Paulson for helping me ID this confusingly variable species.

This jumping spider (family Salticidae) is known as the Gray Wall Jumper, Menemerus bivittatus; it was on the wooden ceiling post at our lunch at the Boston jerk centre.

Our first taste of the wet forest so full of endemics came after lunch when we arrived on the Ecclesdown Road. 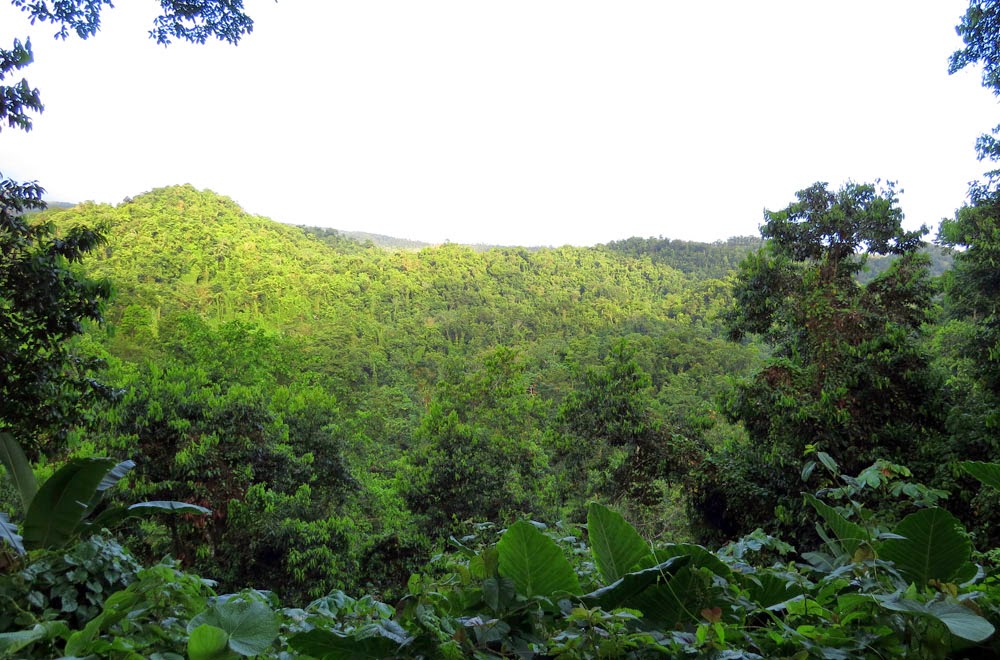 We were lucky to spot this displaying Jamaican Giant Anole, Anolis garmani high in a tree here. There are giant arboreal anoles on other Caribbean islands, but they are more closely related to the smaller ground and twig anoles on the same island than to the giant anoles on other islands. This is a classic example of the evolutionary pattern of speciation called adaptive radiation – one species, after an initial, very rare colonization event, eventually diverges into several species in the same location.

This is a crab spider with its honeybee prey. Many spiders have huge worldwide distributions, thanks to their ability to disperse on winds as juveniles, and therefore there are not many island endemics. You have to look closely at the eyes to even get the crab spiders to genus, but I’d guess that this is a common one in Florida and other parts of the US. And of course the bee is introduced from Eurasia and Africa. 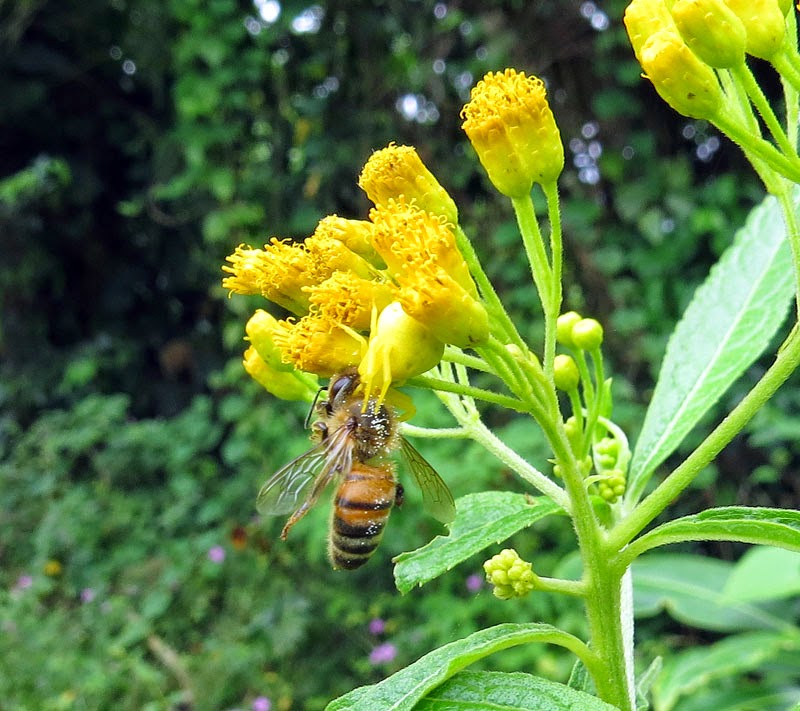 This Eleven-lined Potato Beetle, Leptinotarsa undecemlineata is also introduced, apparently recently, and is feeding on the nightshade Solanum torvum; people like to collect the fruits, which they call susumber, so the beetle is now considered a pest. Thanks to Sean Schoville for the confirmation of my identification.

Nearly endemic is this female Bromeliad Dragonlet, Erythrodiplax bromeliicola also known from Cuban specimens. When I photographed one here four years ago, Dennis Paulson told me it was the first one ever photographed in the wild. This might very well be the second as he failed to find any himself on a recent trip. The male remains unknown in the wild, but there are specimens. Perhaps there are more of them later in the summer.

This snail is apparently in the genus Parachondria, and is one of about 525 species of land snail endemic to Jamaica. There is a great website with a key to the snails, but you have to know what characters to look at (some not visible in the photos), and have some measurements handy to use it. 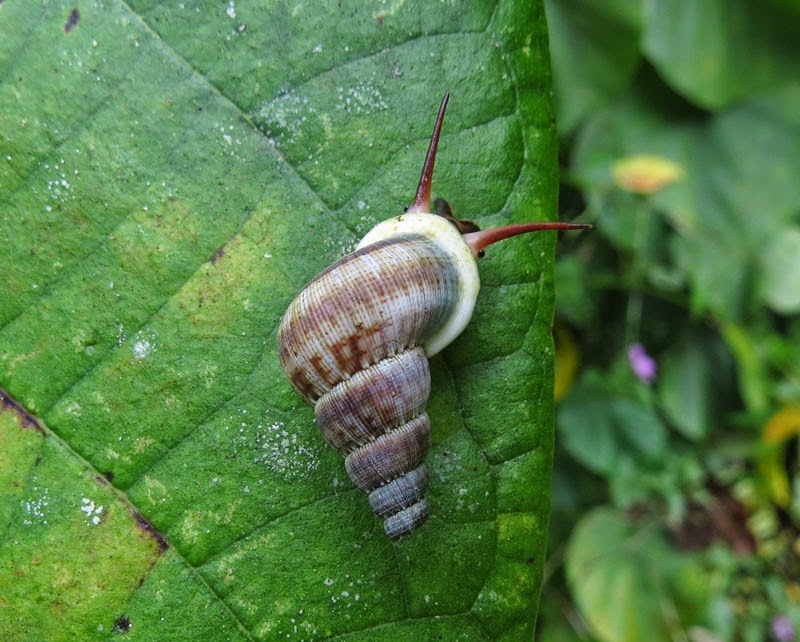 This is the view from our rooms at Goblin Hill near the community of San San. 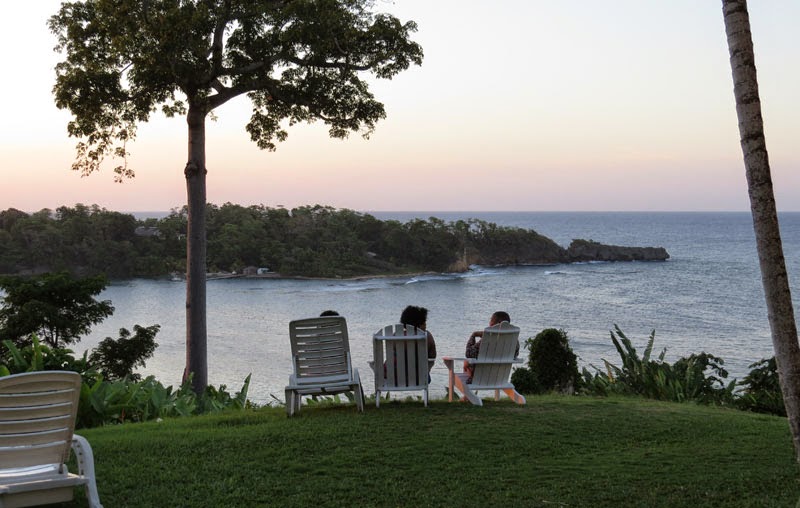 While at lunch on our porch, we watched this Jamaican Turquoise Anole, Anolis grahami. This species seems to be still diverging, with wildly different colors found in different parts of the island.

This is where we were for the first of the four lunar eclipses taking place within two years – and all visible in the western hemisphere. This is a very rare sequence. I set my alarm to get up at 2:00 a.m. to see it, but I was the only one of our group to do so. The next one is on October 8. 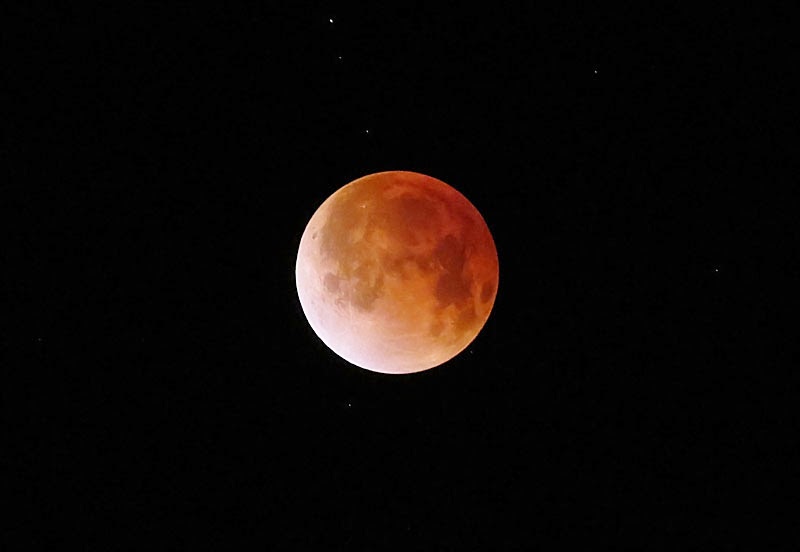 We had lunch at Green Castle Estate on the north coast one day; this nice view of the Blue Mountains is looking to the southeast from the great house. 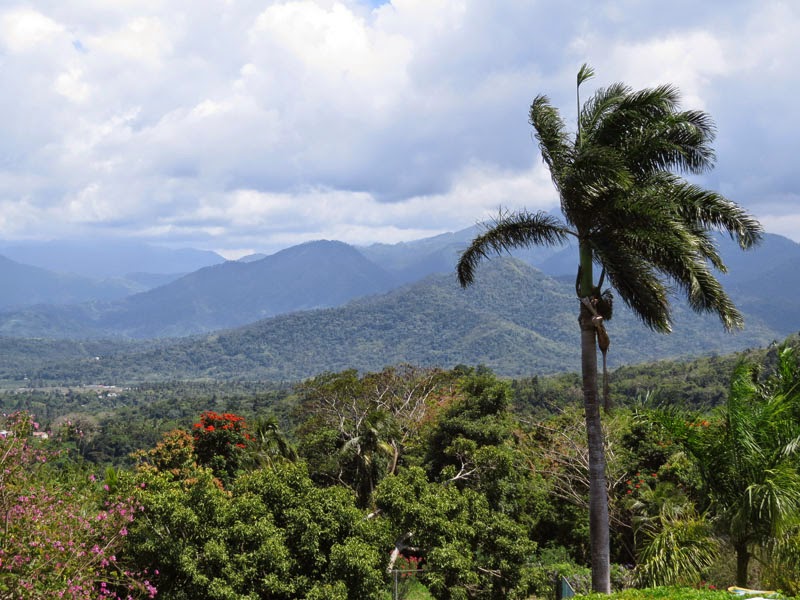 On our walk to the small reservoir was this Caribbean Hermit Crab, Coenobita clypeatus.

Scarlet Skimmer, Crocothemis servilia is another introduced insect, this one from Asia.

Not endemic but at least native is this Metallic Pennant, Idiataphe cubensis.

These next three are from Marshalls’s Pen. This click beetle (family Elateridae) with very bright, steady lights on its thorax, is the widespread Pyrophorus noctilucus. While it would still be called a “firefly” or “lightning bug” in the US, it’s not closely related to the lampyrid beetles found there. But the Jamaicans do distinguish between the two, calling lampyrids “blinkies” and this one “peeniewally.”

This tiny flea beetle might be one of the endemic species specializing on Turnera ulmifolina leaves, but I’ve not been able to even narrow it down to genus; it’s probably Ectmesopus, Parchicola, or Disonycha.

Known as either Savanna-la-Mar Treefrog or Laughing Treefrog, the scientific name of this bromeliad-inhabiting endemic tree frog has also changed a fair bit over the years; when I first came to Jamaica it was Hyla brunnea but now it’s Osteopilus ocellatus.

These last fun critters were in the Cockpit Country, a remote area of rugged limestone in the north-central part of the country. Here the Jamaican Turquoise Anoles look totally different.

My friend Bob Behrstock identified this Yellow-lined Grasshopper, Abracis flavolineata for me; it’s apparently widespread on the mainland but does not occur in the US.

I’m pretty much guessing that this net-winged beetle is Thonalmus subquadratus; there are photos of specimens online that are a very good match, and it’s probably a Jamaican endemic.

Finally, I have a name for this really cool beetle, Macraspis tetradactyla, which I’m calling Jamaican Shining Leaf Chafer. It’s endemic to Jamaica, and last year I saw this for the first time but never did get a name for it. Many thanks to Brett Ratcliffe for helping me with the ID this time. 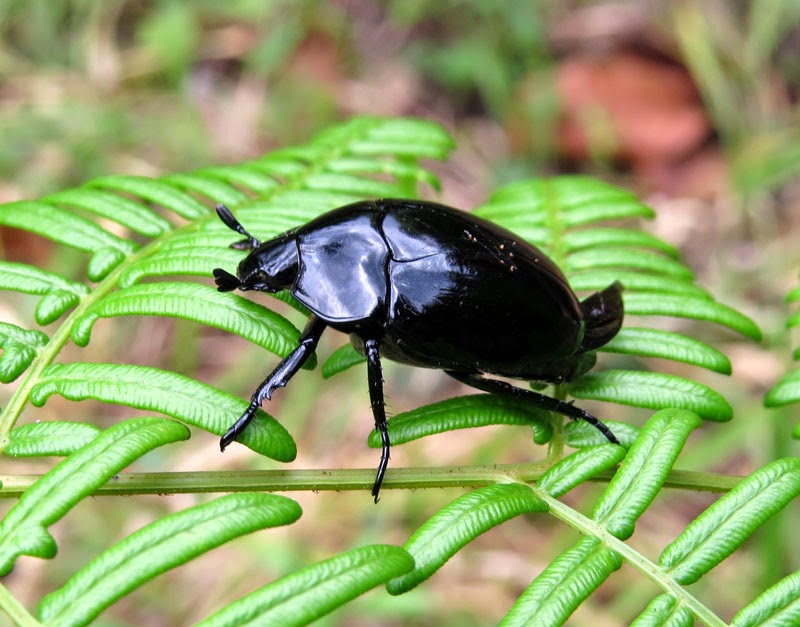 Posted by Birdernaturalist at 10:39 AM