This year was my 16th WINGS tour to Jamaica, but only in recent years have I been avidly photographing and trying to identify the moths. It doesn’t cut into the birding, as they are either around lights at night or are sleeping of the walls of our hotels, when I can photograph them during our down time.

How does one go about identifying moths? There are no books for Jamaica that I know of (though I’d love to have the one from Cuba), but there are some good websites. I usually first start with Matthew Barnes’ site, which has at least a complete list of known species from the island as well as specimen photos of many of them.

Then there’s the fabulous Moth Photographers Group, which has a full checklist for the Antilles, as well as some very good photos of live insects and specimens.

Sometimes there are widespread species with a better series of photographs available on the well-known Bugguide.

Finally there is amazing Bold Systems website which has some specimen photos not found anywhere else.

The most exciting moth this time, partly for its beauty  was the Jamaican Phrygionis, Phrygionis sumptuosaria, pictured at the top. But it was the way I identified it and the fact that it’s endemic that made it so special. It only took a little bit of searching to recognize the genus – I’d seen a couple in Central and South America before. Then I went to Matthew’s site where he lists four species but has photos for only one – and it wasn’t that one. Searching elsewhere showed that one of the four in his list is an invalid synonym of one of the other two, and I found photos of that one on Bugguide and Moth Photographers Group – not it either. That left the final one, which Matthew lists as an endemic, and other websites and googling turned up nothing on it at all. Matthew is great at including references, and he mentions a “Scoble (1994)” and googling that along with Phrygionis turned up the full citation, a paper in the Zoological Journal of the Linnean Society, but available online at Wiley Online Library for subscribers or some huge one-time fee. But I have friends at universities that do have such a subscription, and within a few hours I had the pdf in my email box which showed without a doubt this was the endemic species.

To continue just with the photos, nothing all that exciting, but some pretty ones.

I don’t have a common name for this tiny geometer (inchworm), Lobocleta tenellata, at Marshall’s Pen. 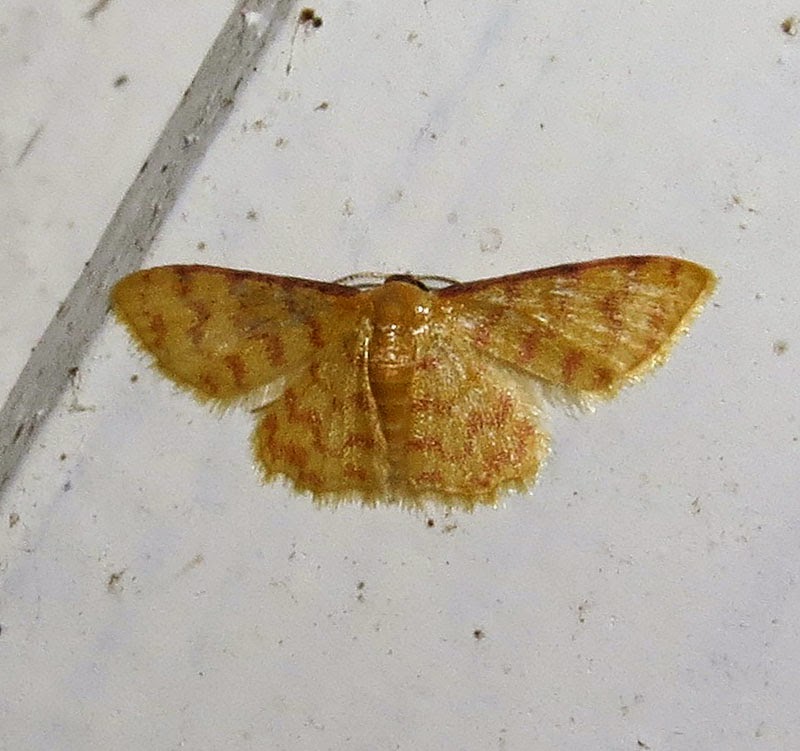 This one was pretty  much identified by process of elimination – the endemic Jamaican Spanworm Moth, Oxydia olivacea at Marshall’s Pen. 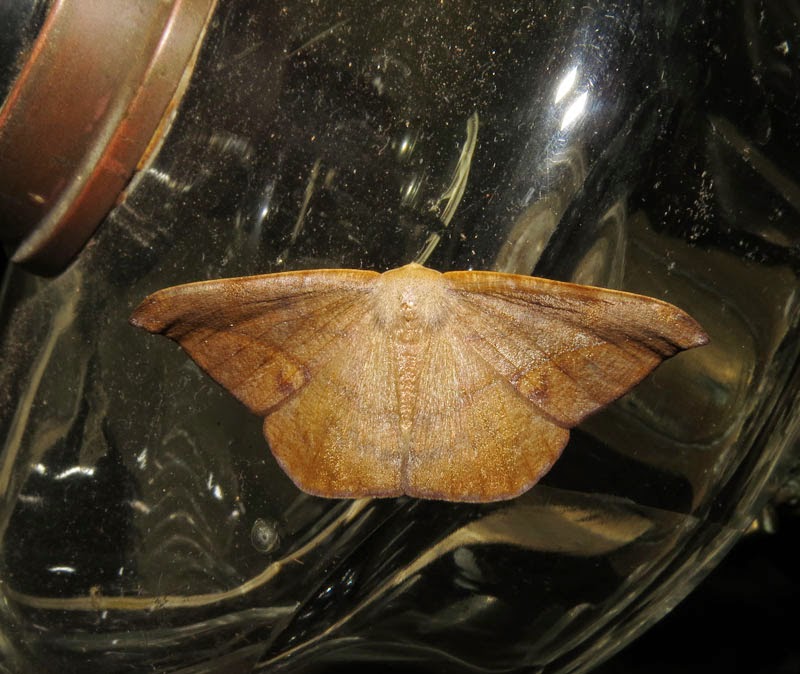 This geometer is the very widespread Herbaria Emerald, Synchlora herbaria. 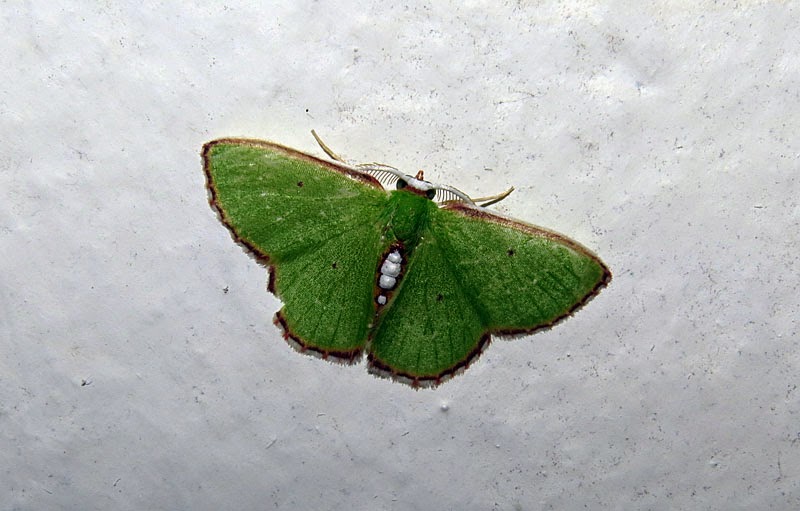 Another lovely green geometer, this is possibly the endemic Kingston Emerald, Phrudocentra kinstonensis, pretty much identified by process of elimination; it’s very similar to others in this genus, but I could find nothing that looks exactly like this, and this is the one species for which no photos are available. There’s an illustration on Matthew’s site from a 1925 publication, but it does not show the dark spots on the body. 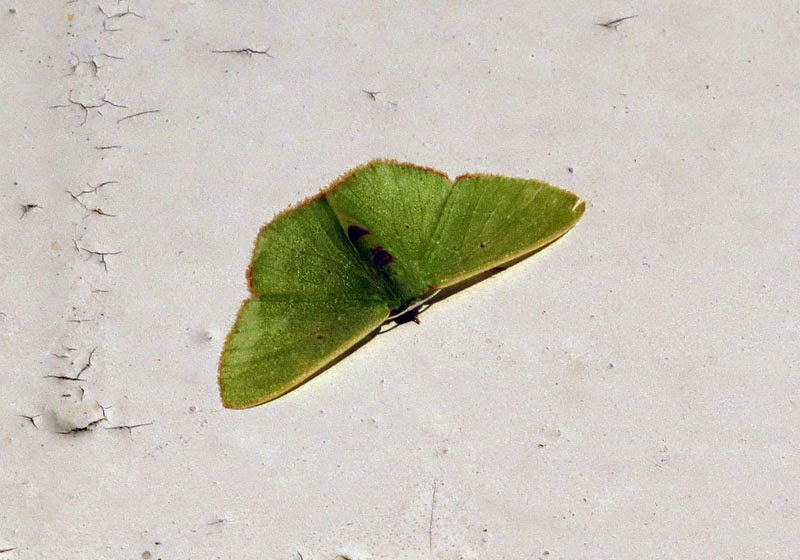 Yet another geometer, this one was easy – Common Angle Moth, Macaria aemulataria. 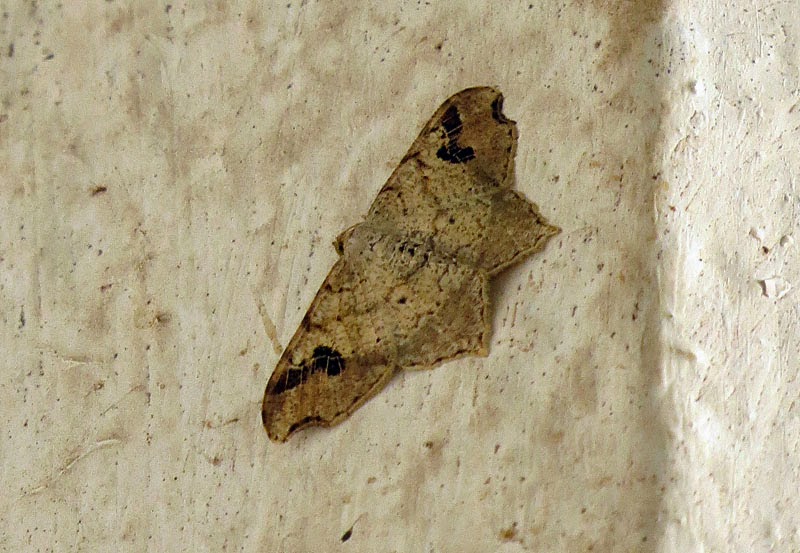 The Satellite Sphinx, Eumorpha satellitia is a widespread insect. It was in my room at Goblin Hill. To get photos like this, you really have to manhandle these strong sphingids and not be startled by the sharp spines on the legs (they prick a bit but are not as sharp as they seem at first). 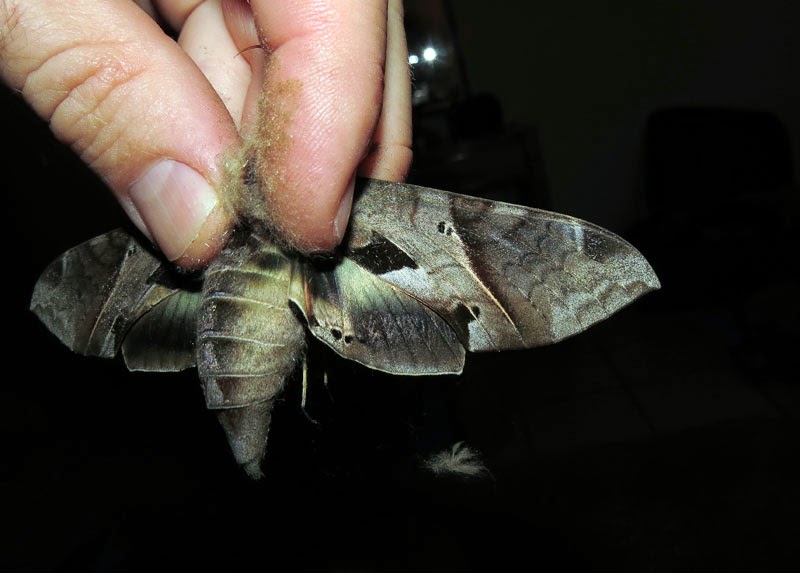 This is what I’m calling Common Mocis, Mocis diffluens; it’s very widespread in the American tropics, but I needed a combination of sites to figure it out. This was in the Cockpit Country 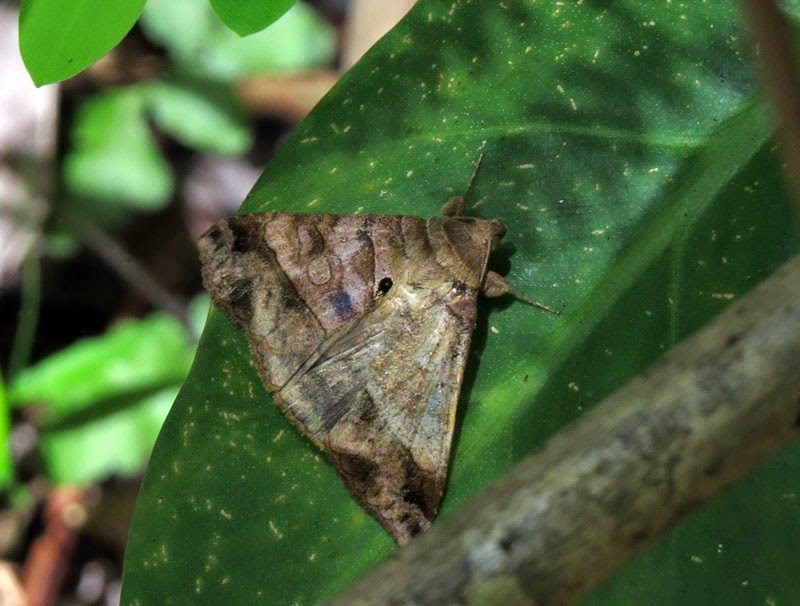 This noctuid is the Famelica Melipotis, Melipotis famelica. Melipotis a rather large genus, and it always helps to have the pattern of the hind wing. 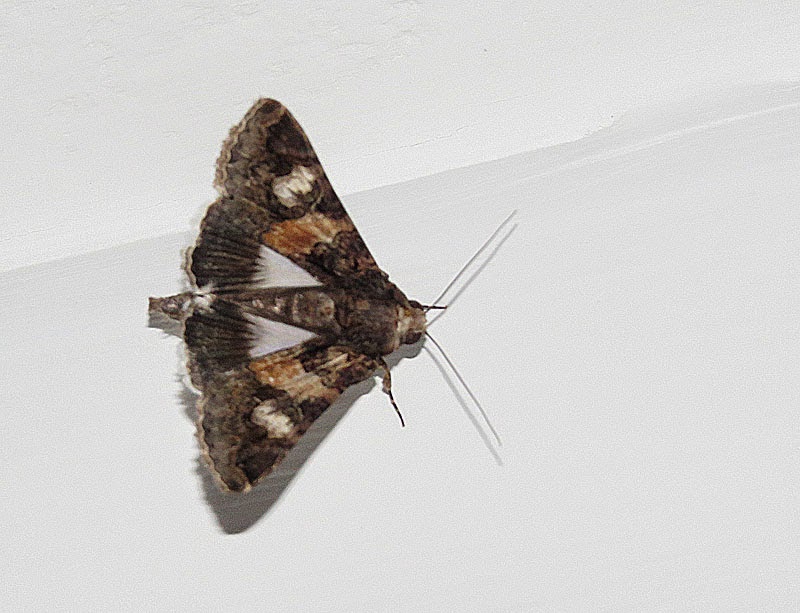 This little pyralid moth is the Recurved Salobrena, Salobrena recurvata, apparently known as a stray to Florida, with two Bugguide photos from there. 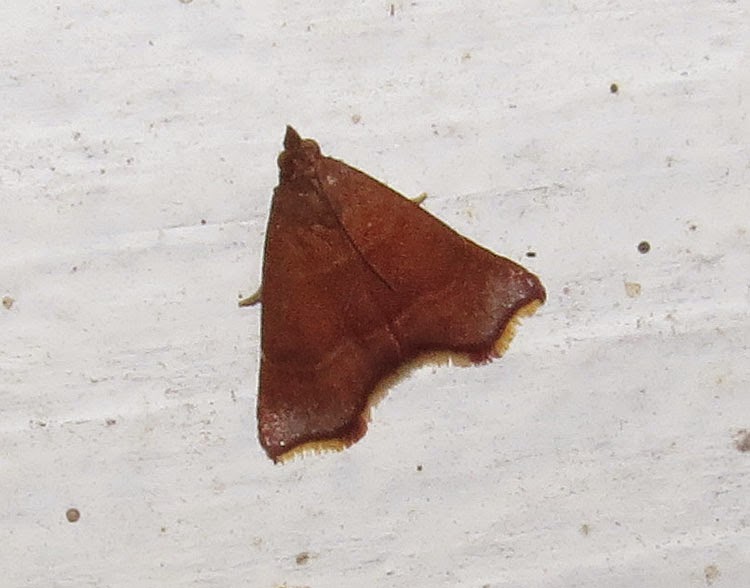 This crambid is the Pickleworm Moth, Diaphania nitidalis. Its caterpillars feed on (and destroy) the flowers of squash and many other members of the cucumber family. It’s a tropical species that can survive some winters in Florida but after one or two broods can disperse way to the north. 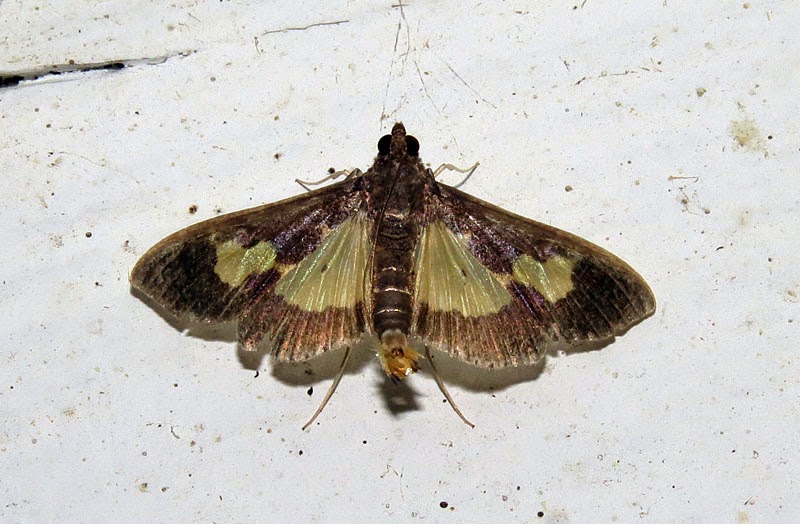 It’s not always possible to identify moths with just photos. This is probably Atomosa Tussock Moth, Lophocampa atomosa, a notoriously variable species, though none of the photos I found look exactly like mine. 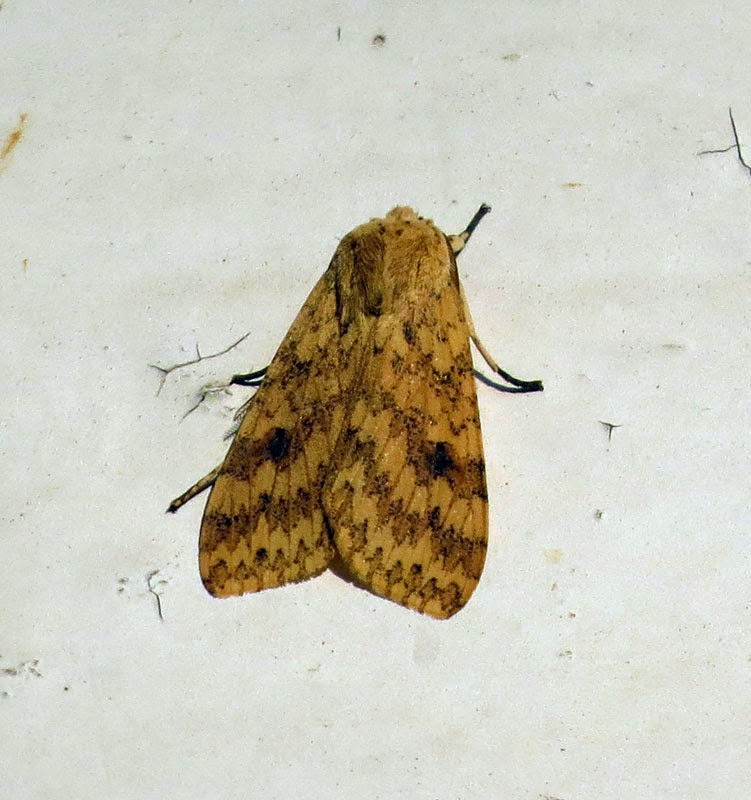 And this is probably Steely Tiger Moth, Uranophora (or Napata) chalybea, the 1925 drawing on Matthew Barnes’ website not being a perfect match, but there aren’t a lot of options for showy ctenuchine moths. 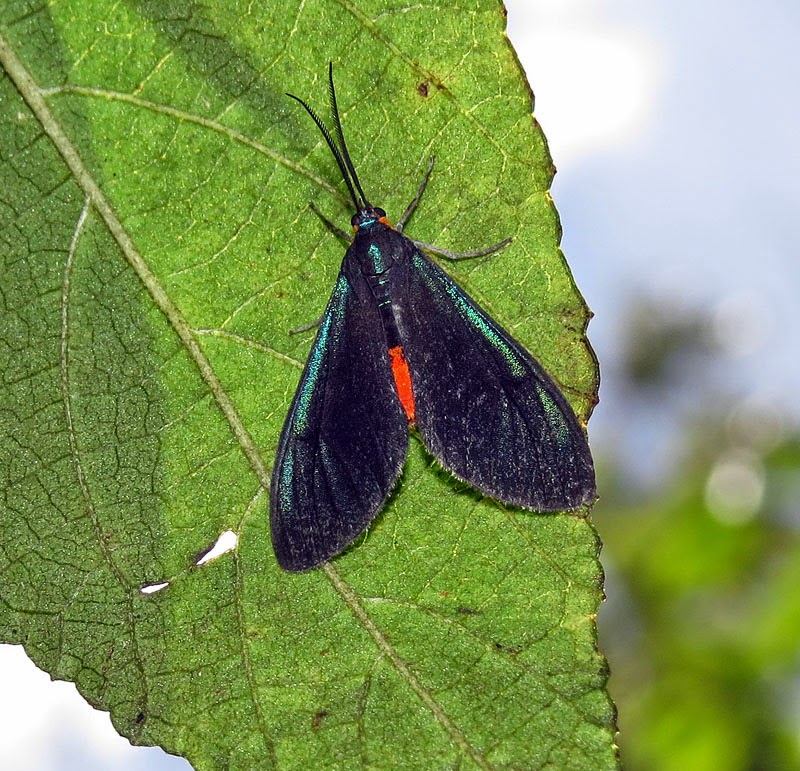 Finally, here’s one I managed to get to genus only: Hypena sp. There are nine species in Jamaica, and the five that have photos online do not match well. Two of the remaining four are endemic. This was high in the Blue Mountains at Starlight Chalet, and I photographed this species here a couple years ago. I suspect it’s one of the endemics (H. leniusculalis or H. lunifera), as many of the high elevation species of birds and plants are endemic here. More widespread tropical things tend be found in the lowlands. 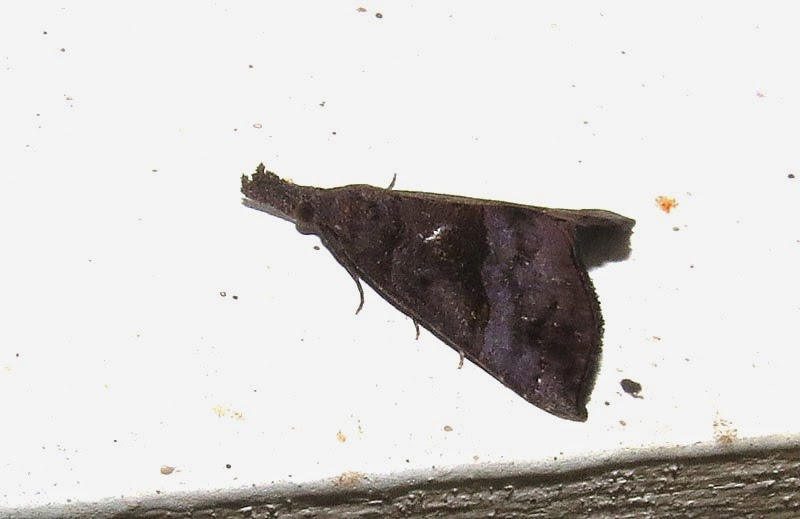 Finally, some are just too puzzling, and I don’t even know which family this one is in. Maybe I’ll stumble into it some day, but for now it’s just “moth species.” 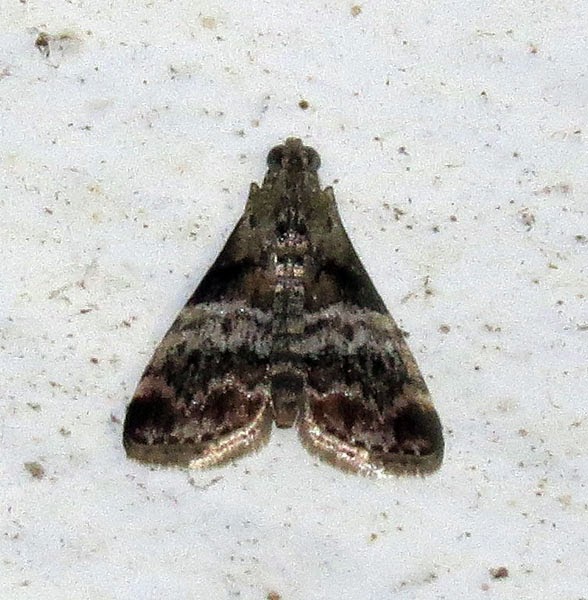 Next blog will be about other critters we had on the tour.
Posted by Birdernaturalist at 8:00 PM