The wonderful thing about staying at a lodge is that the birding begins right outside your room — no extra-early departure to drive to some distant location. And that’s how we started today. In fact, it was difficult to tear ourselves away from the clearing right around the lodge. Chestnut-fronted Macaws and Blue-headed Parrots seemed to be nesting in the same dead palm trunk, while Lemon-throated Barbets and Cinnamon-throated Woodcreepers were in the trees by the lodge buildings.

One of the better birding trails here is the old Jeep Track. It’s a bit overgrown now, but still wide enough to making birding with a group possible without having to go single file. 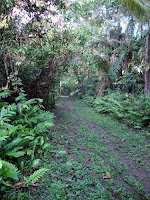 Along the first part, the dense understory hosted some great birds such as Goeldi’s and White-lined Antbirds. One wetter swampy spot had a pair of what used to be Spot-winged Antbird, recently split and now called Brownish-headed Antbird.

A short walk down a side trail leads to a small oxbow lake where a couple dozen Hoatzins live and have become quite used to people.

Other birds we had along the jeep track were a very close Cinereous Tinamou, a group of very noisy Red-throated Caracaras, Fine-barred Piculet, Rusty-belted Tapaculo, and Orange-backed Troupial.

Since I was here only to learn the route (and in part the several birds that I didn’t know already from my travels to Ecuador, Brazil, and Bolivia) — and not to assist Gary Rosenberg as an assistant leader — I was free to linger back, explore trails, and record bird sounds. And of course, photograph the many butterflies and other critters around. Here are a few from the Jeep track and side trails: 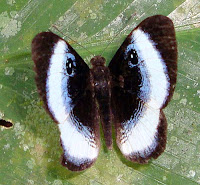 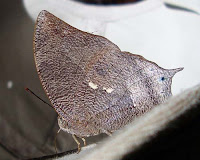 The same individual with its wings open, not often seen. 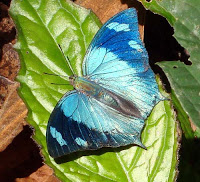 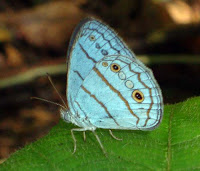 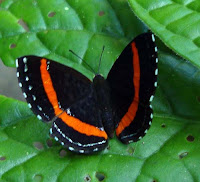 A metalmark, Euselasia orfita. This genus is known for habitually perching on the underside of leaves. This one has a distinct resemblance to a satyr, but there is much mimicry involved in metalmarks. 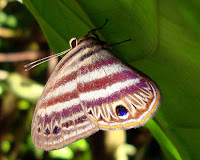 This is a broad-winged damselfly, Mnesarete cupraea. Thanks to Jim Johnson and Dennis Paulson for pointing me in the right direction on this and the next damselfly. 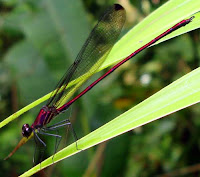 This rubyspot, in the same family, is a little more subdued, Hetaerina rosea. 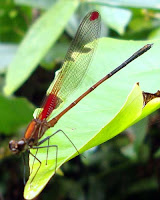 A caterpillar with pink spikes up and down the body. The horns on the head capsule could indicate that this is a brushfoot butterfly, rather than a moth.

I saw several of these oddly shaped grasshoppers. 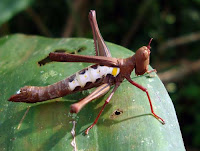 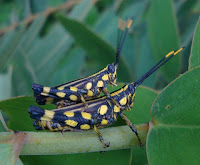 We spent much of the afternoon relaxing around the lodge, and I finally managed a shot of this stunning Leprieur’s Spotwing, Asterope leprieuri. 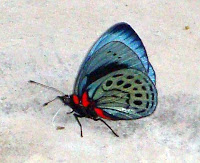 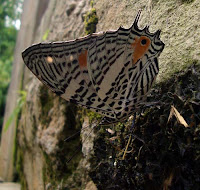 In addition to the hummingbirds I mentioned yesterday, sitting by our rooms and watching the Porterweed hedge and the feeders resulted in Gray-breasted Sabrewing, Violet-headed Hummingbird, Blue-tailed Emerald, Fork-tailed Woodnymph, Rufous-webbed Brilliant (a good rarity), and a few Rufous-crested Coquettes.

This male Rufous-crested Coquette was The Boss. 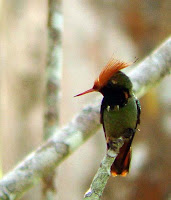 Posted by Birdernaturalist at 10:19 PM