Peru: Day 9 – Down to the base of the foothills at Amazonia Lodge

As I said earlier, as you drop down in elevation through the cloud forest, the diversity increases. You lose some high elevation things, but then you gain even more. Today certainly reflected that. For the first time on the tour, I tallied over 100 species – and it came to a whopping 148. That’s with no water birding, which typically pads the list with a lot of easy-to-spot shorebirds and herons.

We left Cock of the Rock Lodge early to start birding only a half hour down the road. We started running into mixed flocks and great birds right away, and the pace was almost nonstop. I wish I had been able to get photos of all the really cool things we saw, my favorites being Black-backed Tody-Flycatcher and White-cheeked Tody-Tyrant. In fact, Paul Cozza, one of the participants, has been snapping great shots with a snazzy camera setup all trip, and he’s surely to have most of these posted to his website eventually.

This Bluish-fronted Jacamar is one of the few that I took time to digiscope. In the same place was a pair of our first Bamboo Antshrikes, a species that is found only in large stands of Guadua bamboo from the foothills into the Amazonian lowlands. 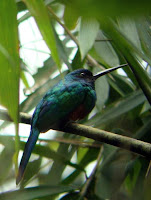 In cloud-forest just above here, we had Golden-bellied Warbler, Yellow-bellied Antwren, and Ocellated Woodcreeper (to be split some day as Tschudi’s Woodcreeper) in mixed flocks. Olive Finch and Chestnut-capped Brush-Finch were lurking in the mossy undergrowth.

As we dropped lower and lower in elevation, we lost things such as Lemon-browed Flycatcher, which we had become familiar with over the past few days. Plumbeous Kites then appeared, a bird more typical of Amazonia – I saw them daily when I spent two months at Cristalino Jungle Lodge in Brazil.

As the morning warmed up, other raptors began soaring, and we were treated to a rare sight of three Solitary Eagles and a pair of Black-and-white Hawk-Eagles, while a short ways down the road was a pair of Black Hawk-Eagles. Great raptors.

But of course, with the warmer temperatures come the butterflies.

This is the familiar Malachite, but not always so easy to photograph.

This Morpho aurora doesn’t look so special when closed, but when in flight, the highly reflective, entirely sky-blue upperside appeared like a shimmering hologram bouncing through the air.

These two species of butterflies are the only two in their genus, and their caterpillars both feed on Cecropia tree leaves. It was quite fortuitous to have both land on Sharon Bradford at the same time. The lower one is the Orion Cecropion, Historis odius, and the upper is the Tailed Cecropion, Historis acheronta. 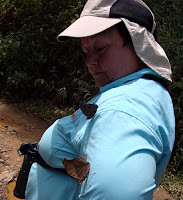 This metalmark is Miranda’s Beautymark, Ancyluris inca miranda (I'm not making this up, Miranda Sonneborn). The true colors were washed out by the flash on my camera and in sunlight were truly breathtaking. 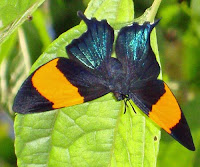 This critter invariably fools one into thinking it’s a stick insect. In fact, it is a grasshopper in the family Proscopiidae, and it can jump, to a fashion.

I love milkweed vines, though in the tropics I have no way of knowing what the genus (let alone the species) is. I thought the fuzziness of this plant unusual. 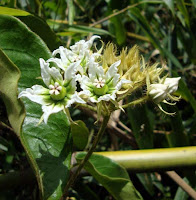 Here is looking northward down the Upper Madre de Dios River, where the Andean foothills meet the uppermost navigable reaches of this Amazon River tributary. Our destination is Amazonia Lodge, which occupies the land on the left side of the river, just left of center. Click on any of these photos for a larger version.

Not far below the overlook we arrived at the port of Atalaya. 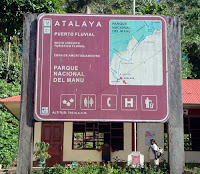 Here we bid farewell Amérigo and Mario, our drivers, lunch preparers, and potoo-spotters. 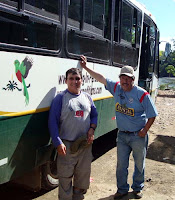 It was just a short boat ride across and less than a mile down the river to the opposite bank. Our new bird for this stretch was a Fasciated Tiger-Heron standing at the edge of a shallow gravel bar, patiently waiting for fish.

This lovely butterfly is Baeotus japetus, a genus found on big Amazon Basin rivers. It greeted us the moment we hopped on the boat. 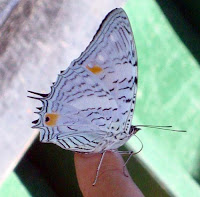 It was then a 15-minute walk down a forest trail and across a plank bridge over small stream to Amazonia Lodge, our home for the next three nights. 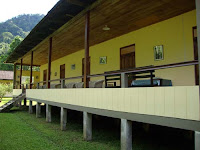 We had time this afternoon to watch the hummingbird feeders and flowers by our rooms, where we saw some fantastic birds: White-bearded and Koepcke’s Hermits, Rufous-crested Coquette, Sapphire-spangled Emerald, Gould’s Jewelfront, and Golden-tailed Sapphire to mention a few.

Then we wandered down one of the trails where we saw our first Hoatzins and Fork-tailed Palm-Swifts.

This is a female rubyspot, a damselfly in the genus Hetaerina.

Even for the participants, it isn’t just the birds that attract attention.

This colorful hairy caterpillar on the trail had everyone oohing and ahhing.

I'm really looking forward to our two full days birding the forest of this lodge.
Posted by Birdernaturalist at 4:25 PM