This morning we again departed Manu Wildlife Center early for another site downstream called Cocha Blanco. This place is also part of the Tambo Blanquillo lodge and offers quite a different assortment of birds from Cocha Camungo, which we visited yesterday morning.

It was only a short walk down a trail after disembarking from our boat to the cocha, which is the regional word for an oxbow lake – a former meander of the Madre de Dios river which is now cut off at both ends.

Here is the structure where the boat is docked. The boat is a wooden platform attached to two canoes, nice and sturdy, and holds enough chairs for a group of about 12. We were 9. 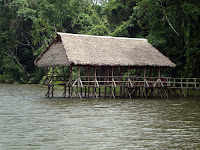 Here is Carlos, paddling us. He and Pancho worked hard for us. 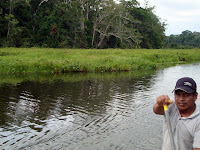 One of the star attractions here is the Horned Screamer, and we had 18, including these 4 chicks. Horned Screamer is in the same order as ducks and geese, Anseriformes, but the three species in this family are quite different in many respects. The “horn” in this species is a stiffened, barbless quill that juts out from the forehead, mostly broken off in this individual. 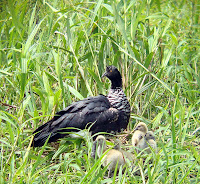 I’ve tried including an enclosure link here to my recording of one pair of Horned Screamers that I made here, hosted at xeno-canto. The word “screamer” was first used for Southern Screamer, which really does have a more raucous yelping, unlike the liquid bugling of this species.

If the recording doesn’t simply appear in the blog, you can click here to open the file at the xeno-canto website. Or, you can subscribe to this blog as a podcast or listen to it as a RSS feed. At the end of this post, I’ll give simple directions for doing either of these.

On the way back to the main river, I noticed this assassin bug (a true bug in the family Reduviidae) with its prey. 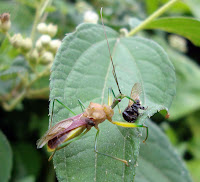 Our next goal for the rest of the morning was a trail through a substantial bamboo thicket on the opposite side of the Madre de Dios River. As I mentioned in an earlier blog, these Guadua bamboo stands offer a unique structure and food supply that several species of birds have evolved to specialize in.

One of the most distinctive and rare birds is the Rufous-fronted Antthrush, which we heard from the impenetrable denseness. I’ve included an enclosure link of my recording with this post as well, or click on this link to xeno-canto.

While trying to see the antthrush, I brushed up against a tree that hosted a colony of vicious stinging ants. Within about 50 milliseconds, there were a dozen ants on my shirt sleeve. Luckily the sleeves were loose, and Tom Bradford saw it happen, helping me brush them off before I got stung.

The ants are apparently Pseudomyrmex triplarinus, and the tree is in the genus Triplaris, in the buckwheat family. This tree is known as Palo Santo or Palo de Diablo and is famous for the ants that live in the hollow trunk. They exit through holes scattered up and down the stems at the slightest disturbance and not only protect the tree from foliage-chewing and wood-eating insects, but also prune the ground all around of seedlings to prevent competition from other plants. 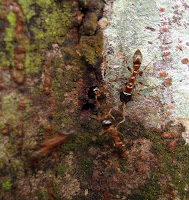 Other great birds we had here were Manu, Goeldi’s, and White-lined Antbirds and a gorgeous Rufous-headed Woodpecker, one of the most ornately plumaged woodpeckers in the Americas.

After lunch back at Manu Wildlife Center we had a nice siesta, after which I wandered some of the trails on my own, first heading towards the canopy platform (similar to the one by Cocha Camungo, but shorter, and today occupied by another group), then doing a loop down the Creekside Trail, back on the Ccollpa Trail.

As you can see from this map, there is quite an extensive system of trails at Manu – about 17 miles total. There are good signs at every junction though, so as long as you stay on the trail, it’s hard to get lost. 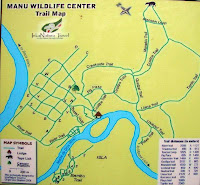 Starting with the pair of Plain Softtails and a Lemon-throated Barbet right behind the cabins (which I shared with Matt Denton and some of his Birdquest tour group), I proceeded to Hauxwell’s Thrush, Dwarf Tyrant-Manakin, Peruvian Warbling-Antbird, Black-tailed Leaftosser, and Cinnamon-rumped Foliage-gleaner deeper in the forest. I recorded some frogs to figure out later (one was clearly the loud, ringing “boip” of Leptodactylus didymus), and as the afternoon progressed, White-throated and Bartlett’s Tinamous began to sing. After adding Olive-backed Foliage-gleaner and recording a White-chinned Woodcreeper (normally only at army ant swarms, but there were no ants here), I stumbled into two gorgeous Pale-winged Trumpeters in the middle of the trail. Luckily, it was a long straight stretch, and I had my head up, so they weren’t startled right away. I even saw the green iridescence on the lesser wing coverts. There are but three species of these distant crane relatives (they stand about 1 ½ feet tall and walk in the rain forest understory), and this one was the only one I hadn’t seen yet.

Directions for Subscribing to this Blog

To subscribe as an RSS: 1. Go to http://www.google.com/reader or other similar site if you know one already. (If you don’t have a Google account, I’d recommend getting one, easy and free.) 2. Click on “Add a subscription” in the upper left. 3. In the blank field that pops up, enter the URL for this blog, which is http://birdernaturalist.blogspot.com. It’s that simple.

At least on a Mac, you can also subscribe with the Mail program. 1. Choose “Add RSS Feeds…” under the File menu. 2. Click on the radio button for “Specify a custom feed URL.” 3. Enter the URL for this blog, http://birdernaturalist.blogspot.com.

To subscribe as a podcast: 1. Open iTunes. 2. Choose “Subscribe to Podcast…” under the Advanced menu (at the top of the window). 3. In the window that pops, up, enter http://birdernaturalist.blogspot.com/feeds/posts/default.

Posted by Birdernaturalist at 6:34 AM